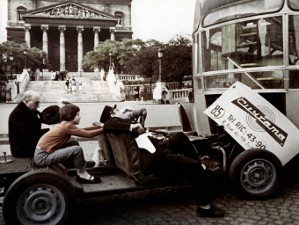 We live in a world which, we pretend, is one, but instead is multiple and changing – and we try to deal with that contradiction.

The colourful comedic style of Louis Malle’s Zazie dans le métro is misleading. Initially the film appears as a stylistic and thematic deviation from his earlier work: be it the fatalist impact of colonial guilt expressed in his debut fiction feature Ascenseur pour l’échafaud/Lift to the Scaffold (1957) or the futility of the bourgeois melodrama explored in his second, Les Amants/The Lovers, (1958). In this sense, Zazie appears as a landmark of Malle’s “rebellion against the tyranny of genre and convention”, defying auteurism just when such film critics as Malle’s own filmmaking contemporaries Jean-Luc Godard and François Truffaut were elevating it to its now canonical status in film theory (1). Yet, potentially the easiest misconception regarding Malle’s spectacularly slapstick third feature would be to understand it as little more than a light-hearted comedy. Rather, Zazie, based upon Raymond Queneau’s 1959 novel of the same name, uses the conventions of the slapstick genre to scrutinise the values and ideals of 1950s Parisian culture in a cinematic explosion of the contemporary zeitgeist of Left-bank existential angst.

Both the novel and the film focus on the arrival and stay in Paris of Zazie (Catherine Demongeot), a young and precocious French country girl with a foul mouth and dogged determination to ride through the underground tunnels of Paris’ métro. Dumped at her uncle Gabriel’s apartment by her mother, the weekend provides Zazie the opportunity to explore the sights of the city and its offerings. However, Zazie’s relationship with the city and the adults around her defy more traditional representations of both Paris and nostalgic childhood innocence expressed in films such as Albert Lamorisse’s Le ballon rouge (The Red Balloon, 1956). Rather, Malle investigates an ambivalence regarding our social reverence towards such childhood purity, using Zazie to create a presence he aptly describes as “disturbing” (2). A self-professed lover of Lewis Carroll, Malle produces in Zazie a fascination with the complexities and contradictions of youth, one reminiscent of Carroll’s own Alice, that exposes the tensions between innocence and corruption, fact and fiction, and the grey areas of nebulosity that exist in the adult world.

Zazie then, works as a vessel to explore something much more interesting than any constructed innocence of youth, allowing the film to channel more existential concerns such as the relentless obsessions facing Uncle Gabriel (Philippe Noiret): with his own meaningless existence, with the decaying nature of European society and with the futility of everyday life. These concerns echo both the post-war philosophical mood of the late 1950s as well as the preoccupations of the nouvelle vague, with which Malle was loosely associated (3). If Zazie, through her endless questions and boundless desire to see beyond the filth and scum of the city epitomises youth, life, or even the potentially ironic pretentiousness of the city’s “nouvelle vague” (4), Gabriel works as her opposite: he becomes a fossilised product of the city’s history, a history that, according to and like Gabriel himself, seems to have lost its meaning. When Zazie demands that he tell her the truth, his answer seems to summarise the film’s very essence: “The truth! As if you knew what truth was. As if anybody knew. The Panthéon, the Invalides, the Gendarmerie, the Madeleine, all a lot of hooey!” It is in regards to this Paris, dressed up in its historical colour but ultimately meaningless to its contemporary inhabitants as it crumbles and decays from within, that the film binds its themes of fact and fiction, present and past, old and new to tell an unwritten history. It is not the glorious history of the révolution française, but one of margins, of inequality, of colonialism, of collaboration and perhaps, even, of failed resistance. It is in this moment that the film becomes closely aligned thematically with Malle’s previous works, as well as those to follow (5).

The film presents the city in a type of travelogue format, skipping from the Eiffel Tower to Notre Dame, the famous boulevards and the banks of the Seine, but constantly arrests its audience mid-spectacle, demanding introspection – whether it be through the tragedy of a lovelorn ageing widow who believes herself to still be young, a policeman bordering on paedophile, or a housewife whose sadness towards her own marital entrapment has produced within her a sense of alienation that has almost made her an ethereal supernatural being. These shady yet endearing characters constantly demand critical reassessment of right and wrong. If we, like Zazie, are looking for Truth in this world, Malle seems to be presenting to us only a microcosmic rat-race where the fundamentals of religion, the nation-state and historical authenticity have all but disappeared.

From the opening scene, Gabriel is presented as an almost misanthropic aristocrat, complaining about the sullied, putrid state of the Parisians waiting at the train station. However, his mouth betrays his humble working class background, and his opening statement, “Doukipdonktan”, which roughly translates as “D’où est-ce qu’ils puent donc tant?” (“What part of them is it that stinks so much?”), not only exposes a personal alienation between Gabriel and the others, but also underlines the essential place of language as a means of dictating notions of belonging, ownership and social hierarchy (this was a fundamental concern of Queneau, and, remaining faithful to its modus operandi, the film takes its opening word directly from that of the novel). Gabriel, as a potential metaphor for this metamorphic adult world, is never what he appears to be: sometimes philosopher, sometimes cross-dressing entertainer, he lives in an apartment of illusions and associates with an array of social misfits and their doppelgängers in the less popular quartiers of Paris. His initial introduction becomes an ironic gesture that exposes the delusions of Gabriel’s position in the Parisian social hierarchy, whilst criticising the institutionalised social hierarchy itself, revealing the gaping contradiction between Parisian high culture and the history it is supposed to represent, as well as the reality of the quotidian life of its inhabitants, whose attachment to this past seems so untenable.

Yet, it is Gabriel and these twisted characters, as well as Zazie herself, who also produce moments of real joy in the film. Love and hilarity have as preponderant an influence on the narrative as enmity and tragedy. Multiple musical numbers, including an extended, intoxicating, jazzy exploration of the hullabaloo of late-night Paris (reminiscent of an earlier tribute to Miles Davis in Ascensceur pour l’échafaud), express the pulsating life of a brave and changing world. And, whilst on the one hand, the film’s use of light and decor communicate a criticism of the late 1950s obsession with consumer culture (which the characters destroy, be it accidentally and intentionally), these filmic elements also, if not paradoxically, memorialise a fascinating and exciting era of modernist architecture and design that is as openly at odds with the values of “old Europe” as the film’s characters and young Zazie herself. Read in this way, the film has the potential to reflect Sartre’s own writings on the positive and dynamic motivations at the heart of existential crisis, as well as celebrate the freedom and sensuality beyond a conservative bourgeois Parisian culture.

Zazie dans le métro plays out as a matrix of contradiction, reflecting both the cultural revolution gripping France during the post-war era as well as the technical innovations of French cinema that would make Malle and his contemporaries renowned. It works, not despite its mélange of slapstick, tragedy, farce and satire, but because of it. If, as Robert Webster notes, the themes at the heart of Malle’s work are “jazz, suicide, obsessive love, [and] young people suddenly forced to confront an evil adult world”, then Zazie, with its philosophical questions of being and mortality and its charming representation of life in all its complicities and contradictions, works not as an anomaly, but rather, as the quintessence of Malle’s œuvre (6).