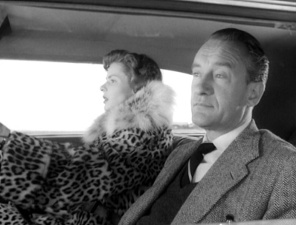 Roberto Rossellini’s Viaggio in Italia/Voyage to Italy was shot from 2 February through 30 April 1953, on a variety of locations throughout Italy, including Naples, Capri, Pompeii, and at the Titanus studios in Rome, and was a tempestuous production throughout. The film’s plot is simple: an unhappily married couple, Katherine (Ingrid Bergman) and Alex Joyce (George Sanders) are traveling from London through Italy to Naples, where they have inherited a villa. Their marriage is a shambles, and they quarrel constantly; indeed, it is hard to imagine a more ill suited couple in the history of cinema. Katherine, relatively young and vibrant, seems trapped in a loveless match with the ill-tempered, dour Alex, who thinks only of money, and openly flirts with other women while ignoring his wife. Katherine has made the journey not only to sell the villa, but also in the hope that the “voyage” will reignite the passion of their marriage; instead, as the trip becomes more complex, and fraught with delays and interruptions, Alex’s boredom and frustration turns to outright hostility towards his wife.

In desperation, Katherine recounts to her disaffected husband the tale of a former suitor who, long ago, has been passionately in love with her; but Alex is unmoved, and Katherine seems resigned to the fact that their marriage will end in divorce, as soon as the necessary papers for the sale of the villa have been signed. The couple decide to split up, and spend their remaining time in Naples separately; Katherine visits a series of natural wonders with a succession of paid, only professionally attentive Italian tour guides, while Alex seeks out the company of a group of British nationals vacationing in Capri. Katherine’s time is nevertheless redolent of the state of her collapsing marriage; viewing the ruins of Pompeii, with human bodies still entombed in centuries-old ash, as well as witnessing first-hand a small volcanic eruption on a tour, Katherine seems lost, lonely, and disconnected from the world around her, yet at the same time she years for some sort of human compassion. Alex is clearly disinterested.

And yet, in the film’s final, unforgettable sequence, as the now-reunited, but still-quarreling couple watch a passing religious procession, they are seized with an unexpected emotion, and fervently embrace each other, declaring their love, and wondering how they could possibly have become so estranged. Their renewal of love is a miracle, entirely inexplicable by any conventional narrative standards; the entire film, indeed, has been consistently moving away from such a reconciliation, and yet, in the film’s final moments, love appears to have conquered a seemingly irreparable emotional breakdown. It is one of the most unexpected and transcendent moments in not just all of Rossellini, but in all of cinema; as one might imagine, the ending was also highly controversial at the time of the film’s release, and remains so, because it seems to come out of thin air, rather than in response to any section or aspect of the film’s narrative exposition. Tag Gallagher, in his excellent volume The Adventures of Roberto Rossellini, devotes an entire chapter to a detailed deconstruction of Voyage to Italy, and notes that

Voyage in Italy often evokes the style of a home movie of the Joyces’ remarkable vacation, because it is a home movie; a recording of what happened to Ingrid Bergman while her husband filmed her attempts to make love with – of all unlikely people – George Sanders (a situation her husband, not at all ingenuously, had set up), and how they went here and there looking for something to see. (1)

Much of the film, indeed, was improvised, a situation that didn’t sit well with either Sanders or Bergman, though, as Rossellini’s wife after their “scandalous” liaison in the late 1940s, Bergman was much more used to Rossellini’s rather unconventional shooting style. However, as Gallagher notes, much of the film’s narrative “drew heavily on a script, New Vine, by Antonio Pietrangeli about a quarreling English couple touring Naples in a Jaguar” (2). Rossellini also had “the novelist Vitalio Brancati on the set during part of the shooting” (3), but, still, “as far as anyone connected with the production knew, not even an outline existed” (4). Shooting, also, proceeded erratically, with Rossellini simply refusing to shoot on days when he didn’t feel sufficiently inspired to work. Rossellini would simply disappear, leaving the crew wondering what the next move would be. Then, too, the finished film languished on the shelf for a year-and-a-half before a distributor could be found; released in July 1954, it was pretty much dumped into theatres, and failed to find an audience (5).

But yet, despite all the wandering and searching that the film depicts, and the seemingly haphazard manner in which it was shot and “scripted”, Voyage to Italy succeeds on every level because it is itself a voyage of discovery, in which Rossellini is trying to capture the actual dynamics between his two leading actors, and to follow them as they attempt to make a connection with each other, and with the Italian countryside as well. A leisurely, contemplative film, in no particular hurry to get anywhere (much like any vacation), Voyage to Italy is unique in film history as a testament to faith, inspiration and innovation, even if George Sanders complained throughout the entire production that he had no idea what was happening, and that Rossellini’s production methods were both eccentric and wasteful. Voyage to Italy is a film in search of itself, a film that only knows its own conclusion when it appears, miraculously, in front of it, arriving at a final destination that no one in the audience could possibly have foreseen. And yet, the final moments of the film seem absolutely “right”; indeed, it seems to be the only possible conclusion to the film. And this, of course, is what Rossellini had been searching for all along (6).