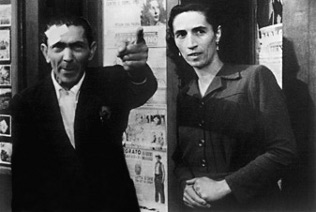 In the canon of Rossellini’s films, La macchina ammazzacattivi/The Machine that Kills Bad People is a transitional and self-reflexive project. It links Rossellini’s earlier neo-realist classics, Roma città aperta/Rome, Open City (1945), Paisà/Paisan (1946) and Germania anno zero/Germany, Year Zero (1947), to his later and more poetic films, Europa ‘51 (1952) and Viaggio in Italia/Voyage to Italy (1954). Film histories construct this transition not only as a shift in style (already noticeable in the 1949 Stromboli, terra di Dio), but also as a moment of reflection on the craft of filmmaking, on its uses and abuses, on its powers and deficiencies. The Machine that Kills Bad People revisits tropes, techniques and locations once dear to the filmmaker, with the eye towards reconsideration.

One such return is geographical, to the colourful but conservative Mezzogiorno, the South, where Rossellini filmed episodes of Paisà. Another return is to the roots of the Italian comedy, to the theatre and to its relationship to cinema. The change in Rossellini’s style is evident: a shift from the austere imagery of neo-realism to the light-hearted flamboyance of the commedia dell’arte. Rossellini’s hero also changes. He is no longer a vagrant child or a resistance fighter, but a photographer/filmmaker; in other words, a comic embodiment of the staple character of modernism, the artist.

The central role played by the photographer and by the camera in The Machine that Kills Bad People suggests Rossellini’s interest in providing us with a commentary on the role of cinema in society, and on his own career as a filmmaker. This act of looking back becomes more intriguing because it is occasioned by a film that makes use of special effects, and brings magic, devils and saints onto the screen. The other major Italian neo-realist director, Vittorio De Sica, also reconsiders his style during this period. In the late 1940s, like Rossellini, he starts working on a comedy also employing special effects and supernatural elements, Miracolo a Milano/Miracle in Milan (1950). Having been faithful to the legacy of the Lumières, the documentation of life, these two neo-realist directors experiment with another major legacy of the medium, that of Georges Méliès, for whom the cinema should show the “unseeable”.

Much has been written on The Machine that Kills Bad People’s commentary on filmmaking. What has been less addressed is the film’s take on fascism and modernity. The camera, “the machine”, is also a symbol of the industrial revolution, and of the process of modernisation this revolution brought about. This light comedy with a moralistic twist is a subtle reflection on the marriage of traditional values and technological progress gave birth to fascism. Seen from this angle, Rossellini’s film addresses the corrupting effect of technology. We have built machines with massive destructive potential, and the values of the ones who control them decide whether these machines will serve us as tools or weapons. Rossellini’s film tells us that somehow we don’t seem yet prepared to cope with our technological progress, with the powerful devices we have created.

This interplay between modern and traditional world views is exploited in the film’s opening sequences. The initial establishing shots of the breathtaking landscape of the Amalfi coast are no longer classic postcard views, but are filmed from a moving vehicle. The camera is installed on a car, the symbol of 20th century industrialisation. Seen from this mobile perspective, the world seems slightly dizzying, labyrinthine, uprooted. The car brings Americans to a remote village on the rocky coast, American money and entrepreneurship, but also modern sex and gender roles. The American businessman wants to build a hotel on the cliffs where the villagers have been burying their dead for centuries, and bring international tourism to the village. The businessman’s niece exposes the village to her emancipated lifestyle, providing the locals with a glimpse into their future. The film’s clearest statement on the unfolding modernisation process is made in a scene in which the Americans’ car runs over the spectral apparition of the patron saint of the city.

It is, however, not only American capital that “upsets” the life of the village. Modernisation has already had a history here under the guise of fascism. The car arrives in the village on a holiday. People on the streets, or, if richer, on their balconies, watch a religious procession. But not even the procession seems to look and sound as is used to. We can see it on the bewildered face of the patron saint who has descended among the mortals: Why does a professional orchestra play the overture of Wagner’s Tannhäuser? Why are the fireworks uncannily reminiscent of night-time war footage? The patron saint seems alienated from his own community, because, as Celestino, Rossellini’s hero, suggests, people don’t believe in him any more. The procession has lost its religious meaning, and is now a public spectacle reminiscent of the mass spectacles and rallies organised by the fascist government.

The camera gives Celestino the power to kill, and he wants to do justice. But his fervour and his black-and-white view of the world do not serve him well. He turns his “infernal machine” (as another famous anti-modern character of Italian culture, Luigi Pirandello’s Serafino Gubbio, calls the camera) against many symbols of modernity. His first victim is the village’s former fascist leader. Merchants and the politicians are his next targets. “Tutti egoisti” (all egotists), Celestino complains, his grievance echoing the fundamentals of the modern liberal state and its capitalist economy. In a modern, uprooted world, structured by an ambiguous ethical discourse, one can no longer tell the difference between a saint and a devil.