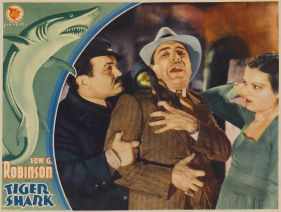 Howard Hawks’ Tiger Shark, a First National-Vitaphone production for Warner Bros., has become one of the director’s least known and seen sound features, in spite of the film’s strong box office returns in the autumn of 1932 (1), and (more significantly, surely) Edward G. Robinson flamboyant star turn, following closely on his myth-making role in Little Caesar (Mervyn LeRoy, 1930). The reputation of Hawks’ own crime opus, Scarface (filmed in mid-1931 and likewise released in 1932), along with his Cary Grant screwball comedies, his Bogart-Bacall romantic thrillers and his John Wayne westerns account for much of this neglect. No matter how good Tiger Shark is, no fishing picture could match these pinnacles of far more vaunted forms. Hawks is far too good and Tiger Shark equally too small.

Yet beyond the horizon of the director’s many masterpieces lie the riches of his less significant work, films that testify, as they almost uniformly do, to his ability to shape the content and form of what might at first glance seem routine generic fare. Of course, Hawks’ atypical relationship to studio production permitted such assertions of artistic volition: Tiger Shark, for instance, represents one of two films made by the director under a $50,000-per-picture contract, where Hawks was granted “authority over both scripting and editing” (2). While “final cut” was reserved for Jack Warner’s approval, Hawks escaped the “factory-based assembly-line production system”, in which even top staff directors were made to work on four or five features a year with little participation in pre- and post-production (3). At Warners, Hawks managed to negotiate his place as a Hollywood auteur.

Tiger Shark unmistakably bears witness to the control Hawks maintained over his and Wells Root’s loose adaptation of Houston Branch’s Tuna. Jettisoning Branch’s “hard-hitting attack on the ruthless cannery- and fishing industry-bosses” – as appropriate as it might have been at socially-conscious Warners, Hawks’ own aversion to “simplistic, ideological thinking” made this subject equally inappropriate for the director (4) – Hawks and Root instead sketched a leader in Mike Mascarenas (Robinson) who attempts to conceal his offer of charity toward the daughter (Zita Johann as Quita) of a deceased employee, claiming that the sum is a life insurance payment. At the same time, the ethnically Portuguese Mike is a braggart, who soon insists that he is the best fisherman in the Pacific and that he earned the princely sum of $14,000 the year before. While we may be disposed to believe Mascarenas, his failure to let his actions speak for themselves separates Robinson’s character from the quintessentially stoic Hawksian hero. There is at least a hint in the Tiger Shark lead of Scarface’s more comic – and tragic – Tony Camonte.

Notably, Tiger Shark also shares the love triangle structure of the earlier film. Coming between the newlyweds Mike and Quita, the latter of whom agrees to the marriage with the caveat that she is not in love, is Mike’s best friend and employee Pipes (Richard Arlen). The better looking Pipes soon attracts the youthful, if experienced Quita – with Mike’s impervious suggestion that Pipes dance with his new bride providing a catalyst. While the Pipes-Quita pairing will furnish much of the film’s emotional undercurrent, established in shared two-shot compositions and eye-line matches that mostly escape Mike’s reciprocal attention, it is in fact the Pipes-Mike relationship, their male “love story” rendered in the A Girl in Every Port (1928) mold, which proves the more enduring (5). On the level of gesture, their mutual dependence and feeling is registered in Mike’s hook-aided scratching of Pipes’ back, a gesture thereby fulfilling a role similar to the lighting of cigarettes elsewhere in Hawks.

However, it is once again in the director’s blocking of actors and action that the quality of the relationship is most clearly articulated. Whereas Hawks often divides Mike and Quita into separate frames, as for instance in their initial meeting where Quita’s suspicion of her suitor prompts the scene’s shot/reverse-shot chain, or in a telling “gotcha” moment where Pipes and Quita’s shared off-camera gaze reveals Mike looking on from an adjacent space, Mike and Pipes – at least when Quita is absent – continually share the same frame. In Hawksian semantics, their cohabitation of the shot confers friendship and confirms equality.

This mutuality is established further through their shared profession, fishing, through which each is injured over the course of the narrative. Mike is the first to find harm when his hand, filmed underwater in the picture’s opening scene, is snatched by one of the eponymous creatures. Pipes’ subsequent injury, leading to his convalescence in the care of Quita, follows an extended documentation of fisherman doing the laborious tasks of their profession. Assistant director Richard Rosson’s observational camera emphasises the tensile strain on their poles and the physical tension shooting through the workers’ arms and backs (6). Moreover, Hawks, again with Rosson at the helm, follows their work at sea with documentary footage of a cleaning facility, thereby giving further voice to his interest in the work itself. Though these passages are as close as Hawks will ever get to neo-realism – a proto-La Terra trema (Luchino Visconti, 1948) as it were – the director does use similar strategies of documentation in his third film of 1932, The Crowd Roars, and in such later pictures as Hatari! (1962). Together they reveal a very different Hawks than we encounter in their immediate, studio-bound predecessors, Scarface and Rio Bravo (1959).

So to return to this question of Tiger Shark’s neglect, or more accurately perhaps, its minor-ness, one might say that both are made inexplicable by Hawks’ organic organisation of the film frame and by his documentarian’s interest in the picture’s workplace subject. Yet, in viewing Tiger Shark, the picture’s relative smallness remains somehow unmistakable for the spectator – even if the above virtues more than recommend it (which they do for this writer, certainly). What is it, ultimately, that Tiger Shark lacks? While Robinson’s performance is arguably not the equal of say Paul Muni’s Camonte, his foaming, bilingual screeds nonetheless enliven a film that otherwise lacks what is, in many respects, important to the success of Hawks’ finest pictures: a George Raft or Dean Martin; an Ann Dvorak or Angie Dickinson. Arlen and Johann disappear from Tiger Shark in a manner that is both appropriate for their clandestine romance and fatal to the film’s hold on our memory. Their absence of charisma is much more detrimental than the picture’s minor form.