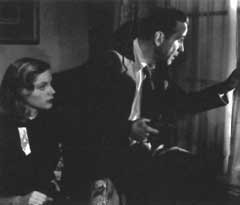 Taxi Driver (Joy Barlowe): If you can use me again sometime, call this number.

Taxi Driver: Uh, night’s better. I work during the day.

Howard Hawks’ 1946 film The Big Sleep is crammed with this type of playful language – from beginning to end. Adapted from Raymond Chandler’s 1939 novel of the same name, screenwriters William Faulkner, Jules Furthman and Leigh Brackett adapted the text to fit squarely into the film noir genre. Retaining much of Chandler’s caustic phrasing, the dialogue is indeed as treacherous as the network of deception and murder inhabited by the many rigid characters. Though just as The Big Sleep is famous for its quotable dialogue, it’s also renowned for its convoluted narrative. At one stage during production, Hawks and Bogart were in disagreement about whether a certain character was murdered or committed suicide. Upon consultation with writer Chandler, it was apparent that he didn’t know either! However, in this multi-planed narrative structure, there exists a simplicity – a love story. Bogart and Bacall’s early exchanges of verbal fireworks sit aloft, though inextricably amongst, a bedrock of sub-plots involving blackmail and murder. Whether a love story with a murder-mystery backdrop, or vice-versa, The Big Sleep is rich rather than ‘convoluted,’ memorable rather than ‘needing dissection.’

Humphrey Bogart slips into Chandler’s hard-boiled Marlowe character and makes himself right at home. In the opening few sequences, Bogart/Marlowe displays his outright adeptness; first in some comical interaction with Carmen Sternwood; then in a serious briefing from Mr. Sternwood, which gets the narrative moving; then finally in his meeting with the feisty Vivien (Lauren Bacall). Marlowe proves adept in tackling the forthcoming case and being politely wary of both Carmen and Vivien – either of which may or may not later assume the role of the femme fatale. Throughout the film, we the audience are right there with Marlowe as he takes a hold of the situation (indeed, he is in almost every scene). However, this doesn’t offer the viewer access to character subjectivity, rather we learn of new developments at the same time Marlowe himself does. We are not necessarily ‘identifying’ with our hero, instead we’re riding along on his shoulder, working things out as he does, or after he does so for us. The sometimes film noir convention of the world-weary hero’s voiceover is successfully avoided here. This allows the viewer to wonder “what the hell is he/she up too?” rather than Marlowe subjectively, via voice-over, speculating that “he/she is up to so and so..”

What gives depth to the dimension of the screen chemistry between Bogart and Bacall, is that Vivien/Bacall is equally adept in work and play. When we first see her (which is when Marlowe does) she is dressed smartly in a uniform-like jacket, complete with shoulder pads and collar, and later with checkered jacket and a black beret. Hawks is presenting Vivien as a figure equal to Marlowe in terms of facing the tasks ahead. Her costuming is a subtle denial of another stylistic convention of the film noir genre: the sinister allure of the femme fatale – Vivien wears not passive and seductive whites (e.g. Kim Basinger in L.A. Confidential or Faye Dunaway in Chinatown), but active and assertive jackets and collars. But she’s not only dressed for success, she can also talk the talk. Her verbal jousts with Bogart are a highlight of the film. She is quite capable of functioning in this environment of murderers and blackmailers. Whilst The Big Sleep does contain an investigative plot and a causally significant woman, it does defy conventions of the femme fatale.

This was Bogart and Bacall’s second film together; they previously appeared in Hawks’ 1944 Hemingway adaptation To Have and Have Not. Then Warners recruited Hawks (and the same writers, Furthman and Faulkner, to adapt Chandler’s novel) again, for The Big Sleep. By the time The Big Sleep went into production, the two stars had developed a real-life romance – Bogart then in his mid-40s and Bacall in her early 20s. The studio star system was well established by the mid-1940s, thus the public interest in Bogart and Bacall was ample foundation for audiences to appreciate the on-screen sparkle of Marlowe and Vivien, teamed up in both business and pleasure.

Hawks produced and directed a remarkable body of films in a variety of genres. Six years before The Big Sleep, he made the classic comedy His Girl Friday, also with an investigative plot and featuring a causally significant woman – again, both inextricably bound-up in a fast-paced love story. Then Hawks’ female star was Rosalind Russell, and again his female lead was witty and dressed to kill in a then male-dominated environment. Hawks’ films continued to offer us archetypal heroes in well-established genres. In 1959 he again teamed up with writers Furthman and Brackett to film Rio Bravo, a classic western featuring John Wayne as a peace-seeking sheriff.

The world of The Big Sleep is a world of high-class Hollywood hoodwink. The film’s pace is relentless; the lighting kept low-key. And Max ‘Casablanca’ Steiner’s score is just the right soundtrack for us as we ride with Marlowe through the rainy, gloomy streets. Hawks’ 27th feature film is worth another look, whether you take your whiteboard into the cinema and try to map out the plot, or you just go along for the golden dialogue.