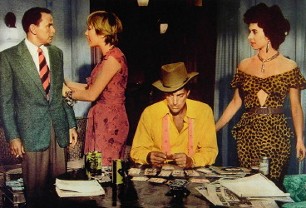 This annotation previously appeared in Senses of Cinema, no. 19, March–April 2002.

Some Came Running is probably best remembered for its great and gaudy penultimate scene in which newlyweds Dave Hirsch (Frank Sinatra) and Ginny (Shirley MacLaine) are stalked by her jilted lover through the phantasmagoria of a carnival celebration brimming over with customers and lit up with all sorts of radiantly campy colors. This fairground scene radiates a pounding, frenetic energy. As the late film writer Stephen Harvey describes the scene:

Minnelli fills the screen with a blaze of red light. … [T]he camera pans a few feet to reveal the main street of this Indiana town in full festive pomp. Minnelli’s most stunning brand of applied artifice follows, as he turns this real place into a CinemaScope hallucination… spinning lights and milling crowds, and carnival roustabouts setting up their booths, all aswirl in his breathless lateral tracking shots. (1)

Minnelli himself explained the inspiration for the scene’s visual style in this way: “I decided to use the inside of a juke box as my inspiration for the settings… garishly lit in primary colors.” (2) His comparison is fitting for, along with the vibrant look of technicolor cinema, the jukebox captures that side of the American 1950s caught up in a loud kitsch, a visual display that proudly proclaims a showiness that verges on vulgarity. If a common cliché of the 1950s imagines the period as one of bland conformity, in contrast a whole series of pop phenomena – from the jukebox (and the splashy music contained therein) to the cinema to pastel fashions to overlarge cars with razor blade-like tail fins to the shimmer of Jell-O and so on – remind us of everything excessive in the decade; of everything, indeed, that exceeds bland middle-class propriety. In fact, much of the narrative of Some Came Running has to do precisely with the dominant culture’s wish to uphold norms of respectability, and in this sense the carnival scene shows how everything that this culture seeks to repress comes bubbling to the surface to explode in wildly dramatic fashion. It is particularly appropriate that Some Came Running was shot in CinemaScope for this widescreen process would seem well-fitted to an explosive spectacularity that threatens to spill off the screen in the sheer bigness of its effects.

But Some Came Running is also notable for a dramatically effective, if less showy, use of the widescreen format to capture subtle permutations in the interpersonal relationships of its central characters. In fact, Some Came Running connects the spectacular level in its broad depiction of a general condition of Americana to a more intimate level centered on the melodrama of a few select figures: the film’s chronology parallels the gradual preparations for the fair with the slow progression of Dave’s own narrative trajectory. To underscore this trajectory, the film uses compositional strategies of widescreen to contrast Dave’s initial emotional limitations and the growth he finally is capable of. In particular, in several scenes of the film, widescreen composition serves as a signal of Dave’s inability to open up to others, to let emotional engagement with other people into his life, and to even notice such people from within the protective space he has built up around himself.

Take, for instance, the very beginning of the film: the widescreen positions and isolates Dave in the long horizontal shape of the bus bringing him back to his hometown and it is only late in the scene that we (and then Dave) remark the presence of the forgotten Ginny in a seat behind him. Likewise, in one of the many scenes in which Dave gathers in a bar with his newfound gambling partner Bama (Dean Martin), Ginny remains unnoticed, way off in the back and side of the frame, until she insinuates herself into Dave’s presence. Ginny is rarely on the same plane as Dave, on a level spatial relationship with him. In contrast, as befits the Rat Pack masculinist ideology in which women are only accessories and men’s fundamental relationship is to their male pals (with whom there is always the distance of cool professionalism), Dave and Bama are often pictured side-by-side, two buddies engaged in playboy-culture pursuits, as when they sit at tables gambling.

Interestingly, though, the film’s trajectory suggests the limitations of such machismo and the need to recognize the femininity that is pushed to the side, excluded, occluded, forgotten. At the film’s end, at Ginny’s funeral, there is once again a composing of characters along a fairly level plane (emphasized all the more by a tracking shot across this plane) but Dave and Bama have now come to realize all their callousness and carefree insouciance had ignored. Hence, in memory of Ginny, Bama removes his hat, something he swore he never would do. This, among other things, is a film about men who grow and who seem to learn.

But the learning process is extended also by the CinemaScope composition to we spectators who have to discover how to read the frame and learn to modify what we think we’re seeing. Just as the scenes in which we suddenly realize Ginny’s presence teach us to revise what we know, other moments of the film exploit widescreen cinema’s potential to create ambiguity by the fact that there’s often too much to see on the screen. Take, for instance, a scene in which we see Dave’s brother Frank (Arthur Kennedy) in his office as his secretary comes in and performs seemingly trivial activities through the course of a shot played out without editing. Everything – from the star-system that makes us attend to Kennedy more than some unknown lesser actress to the contrast between her uneventful tasks and the narratively consequent things that Frank is doing – conspires to make us see the secretary as an unimportant figure (or in truth of fact not really see her at all). Only gradually do we realize her importance as an object of desire for Frank, a desire he will later act upon and that will almost destroy his marriage.

Some Came Running is a film in which we think we know what we’re seeing but where we have to learn to revise our understanding and, like Dave especially, learn to let more into the range of our emotional experience. The big space of CinemaScope initially establishes a condition of withdrawal and isolation that the narrative works to overcome.

But it is easy to overestimate the depth and even permanence of Dave’s growth and of the film’s optimism about one’s ability to learn and change. Early in the film, Dave had seduced the repressed school teacher Gwen (Martha Hyer) and there the composition had suggested an equality of the lovers by putting them side-by-side on the screen and rendering them as pure silhouettes caught up equally in their amorous pursuits. But at the end of the film, as Dave and Bama commemorate the slain Ginny in the aforementioned long lateral tracking shot of the funeral, Gwen is shown apart, revealed only in a cut and a look toward Dave that is not really answered, that is not given any finality. Perhaps Dave has grown but nothing is certain and everything remains open in this explosive minefield of fragile post-war human interaction and relationships.