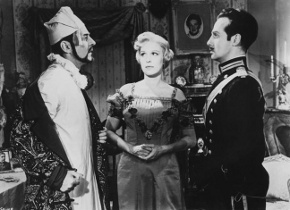 After making a series of films that he considered to be failures, Ingmar Bergman proclaimed his simple intent to make “another success” before starting work on Smiles of a Summer Night. But although it is constructed around comedic themes and situations, one cannot say with any degree of certainty that Smiles of a Summer Night is a funny film. Instead, it is, in a Bergman sort of way, a film that displays a rather poignant and biting dose of angst.

Bergman, describing the film as a technical and formal challenge, stated that he wanted “to make a comedy with a mathematical pattern – man-woman, man-woman. Four couples. And then muddle them all up, and sort out the equation.” (1) And yes the story is muddled enough to enable a characteristically existential take on life, love, marriage, and the passage of time.

Smiles of a Summer Night begins with the main character, Fredrik Egerman (Gunnar Björnstrand), smoking a cigar in his study. He is given tickets to a play and told that a Ms. Armfeldt (Eva Dahlbeck) is to be the leading actress in the drama. Egerman is delighted to attend. Ms. Armfeldt, we quickly discover, was once his mistress for two years after his first wife died. Egerman is eager to see his old flame. The series of ironic twists and turns that follow set up the comedic effect of the film. But one would be remiss to suggest that what ensues is typical of comedy. For one, the film discusses, talks through its comedic content much more than it allows the events to speak for themselves. Then there is the underlying heaviness that all but a few of the characters showcase. While not neurotic like those found in Woody Allen’s A Midsummer Night’s Sex Comedy (1982), which Bergman’s film is said to have inspired, the Swedish director cannot seem to avoid infusing his characters with the heavy-handed neuroses and concerns that we encounter in many of his other films.

Frankly, Egerman, who is a lawyer, is a miserable character. He is selfish and unemotional. His son, Henrik (Björn Bjelvenstam), a theology student is also miserable, but only because he acts as the moral/spiritual anchor to what he considers his father’s failed life. After the young man has passed his exam, the professor praises him by saying: “At last a theology student who is not an idiot”. Actually, in several respects, Henrik adds a modicum of moral corrective to his father’s lifelong debauchery during the film’s explosively revealing luncheon scene.

The love, marriage, and infidelity angle of the film is not predictable. The web-like entanglement of those involved is actually rather complex. Its resolution is no less involved. Egerman has remarried a young woman who is not yet 20 years of age. The film does not truly get complicated until Egerman takes his very young wife to see his former mistress act in the play. The three actresses on stage mock men, love and marriage. One of them says that a woman can do anything she wants to a man as long as she doesn’t hurt his dignity. This makes Egerman frown. After the play he gets together with Ms. Armfeldt backstage. He tells the actress about his young wife, whom he confesses does not understand his emotional needs as an older man. She derides his decision to marry such a young girl. Ms. Armfeldt suspects that Egerman is seeking reconciliation with her. She instructs him that she has no time for love.

This is the type of film where a concise plot summary is next to impossible without falling into pedantry. Suffice it to say that in what I will refer to as the second half of the film the action speeds up considerably. Ms. Armfeldt convinces her rich, elderly mother to invite all of her friends: Egerman, his wife and son, Ms. Armfeldt’s other lover, Malcolm (Jarl Kulle) and his wife (Margit Carlqvist), and Egerman’s maid, who is his son’s lover, to a weekend in her country mansion. Of course, this is the seat of the culminating comedic entanglements that drive the film.

Ironically, some of the film’s more wise, moving and revealing lines are delivered by Ms. Armfeldt’s mother. For example, on one occasion she says to her daughter: “I’m tired of people. But that doesn’t stop me from loving them. I could have them stuffed and hung in long rows, as many as I want.” These lines serve to counter and question the bickering and infidelities of others. She also revealingly states: “You can never protect a single human being from suffering. That’s what makes one so terribly tired.”

By the end of the film, Ms. Armfeldt’s “plan”’ as she calls it, of bringing together all of the love-starved characters begins to take shape. Her major objective is to teach Egerman and Malcolm the value of love. The new and varied combination of lovers that she hopes for is more or less an unsuspecting challenge that she sets up for them. This is the portion of the film where levity takes over most of the characters.

Smiles of a Summer Night is a film that is set at the turn of the 20th century. There are some indicators of this period setting – for example, an early version of the horseless carriage – the automobile – makes a splash with at least one character. Bergman takes some very timeless themes and explores them through the lives of a handful of characters; the weekend outing to the country estate serving as a microcosm of some aspects of the human condition. The events are accelerated in order to meet the cinematic conditions that Bergman sets up for himself as a director. Most of what we encounter in Smiles of a Summer Night can take place anywhere, and probably has occurred to some degree throughout human history. How the characters in the film have chosen to live is what makes this film most interesting to me.