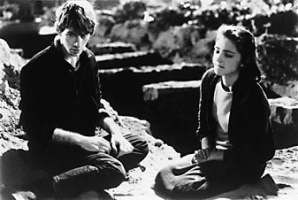 Internationally acclaimed for his more recent films, Portuguese filmmaker Pedro Costa has been making previously unheralded work since the late 1980s. After finishing his studies at Lisbon’s School of Cinema, Costa worked as an assistant director to a number of Portuguese filmmakers. His first film was a short – called Cartas a Júlia/Letters to Julia – made for a Portuguese National Television (RTP) series and released in 1988. Just a year later he finished his first feature film, O Sangue/The Blood.

The 1980s were, in Portugal, a time when the regular production of films, supported by the Portuguese Cinema Institute (a governmental institution for the promotion of cinema), really began. These were times when João Bènard da Costa, a Portuguese cinema theorist (and director of the Portuguese Cinémathèque), begun to talk about a “Portuguese Cinema School”, a concept that relates to and describes a particular way of making films, either in relation to a specific view of production or in relation to specific themes. This group was related to the Portuguese nouvelle vague, a movement that radically changed Portuguese cinema in the 1960s. Called “Cinema Novo”, this movement included such filmmakers as Paulo Rocha, Fernando Lopes, João César Monteiro and António-Pedro Vasconcelos. The so-called “Portuguese Cinema School” also included a wide spectrum of directors such as António Reis, João Mário Grilo and João Botelho. Manoel de Oliveira, of course, has to be accredited as the master of the various generations, influencing all of them.

In the context of the economic growth of the 80s – Portugal joined the European Union in 1986 – the Portuguese producer Paulo Branco started to support (with money from the Portuguese Cinema Institute) a new generation of Portuguese directors such as Botelho, João Canijo and Pedro Costa. It opened the door for a new generation who had its own problems and strategies.

The Blood is a film that foreshadows the typical structure of the films that would emerge in the 1990s. The film also has its own unique characteristics, including its beautiful black-and-white cinematography and its use of specific actors of an older generation. The later element is crucial in differentiating The Blood from the director’s subsequent films, because progressively Costa started to work with amateur actors. The Blood is also, essentially, a classical fiction film, and is characteristic of Costa’s early work. In the following projects the director started to make hybrid films (such as Ossos/Bones (1997) or No Quarto da Vanda/In Vanda’s Room [2000]) which mix together documentary and fiction.

In a certain sense, we could say that The Blood is an academic work in which the director experiments with story, character, camera position and soundtrack. The film is for Costa an illustration of the things he can do with a camera: only later did he define his own language and ethical behaviour.

However, The Blood inaugurates a way of looking at reality that is thematically significant to this new generation. By the of the 80s, Portugal was already a stable democracy, and these young directors were starting to look to the peripheral social classes for their subject matter, and beginning to reflect a deeply philosophical look at Portuguese identity. In The Blood this philosophical search is characterised by the issues of orphanhood and illness: the main characters – the two brothers Nino and Vicente – have to deal with the disease of their father and then later his death. Even though his death is mysterious, we can still guess that Vicente kills his father in a radical effort to end the family crisis: the father’s illness and their financial problems.

In the subsequent plot of The Blood we also discover that Vicente has inherited the debt of his father, which leads to him being chased by two strange men. Thus, the plot of the film can be read as a metaphor for the strange relation between the new generation and the old: a generation that lived in the era of Salazar’s dictatorship and is now trying to make its way in a free democracy. The beginning of the film also introduces this discourse: a shot/reverse-shot of Vicente and his father, with the later slapping his son in the face.

It’s interesting to note that after the two brothers are released from their father (when he dies), they have just a few days of freedom. After this period, they become “imprisoned”: Vicente with his father’s debts and Nino with his uncle, who takes him home. This sense of imprisonment is a fundamental characteristic of Costa’s work and that of the newer generation of Portuguese filmmakers (such as Canijo, Teresa Villaverde or Botelho). It is interesting to also note that Costa’s work, and that of the generation he belongs to, is populated with young characters that have strong problems. This can be read as a total metaphor for the sense of not belonging that is a characteristic of Portuguese identity, as noted by the prominent Portuguese philosopher José Gil (and his recent book Portugal, The Fear to Exist). Costa’s work is a corpus of characters with no future, or who are defined by their passivity and blocked by constant obstacles.

In terms of its cinematography, The Blood offers a close look at its characters, never leaving their young faces. For Costa, they are the most important element of the film. As the later films fully show, Costa is also a refined talent in terms of how he frames a scene, giving us beautiful shots that help expand the meaning of his montage. We can also note that the use of music in certain sequences marks The Blood’s difference to Costa’s later work, where the use of soundtrack music is reduced. In this film, the score dramatises the scenes, a characteristic which will be denied in his subsequent work.

In conclusion, The Blood offers a unique insight into Costa’s early work, showing that his (straight) fiction works are also strange adventures into the soul of his characters, giving a wider look at a Portuguese world that is, at times, strange, beautiful and painful.