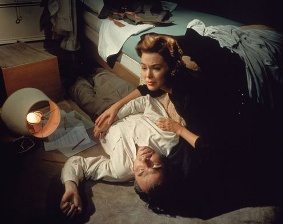 “Oh God said to Abraham ‘Kill me a son’

A key characteristic of many of Nicholas Ray’s best films is their willingness to deal with contemporary issues and problems, even if somewhat indirectly at times. Several of the films Ray directed on either side of Bigger Than Life, Rebel Without a Cause (1955) and The True Story of Jesse James (1957) (originally to star Elvis Presley), are in some ways disparate works that each deal with the “problems” of juvenile delinquency, home, family, the generation gap and the psychology of individuals out of step with mainstream society (although Hot Blood, the film immediately preceding Bigger Than Life, does also deal with several of the these themes it is in many ways a garish anomaly – and significant failure – alongside Ray’s more robust work). Ray is often also recognised and described as a Hollywood progressive (2) and one of the few American/Hollywood directors of the period to consistently confront burning, or at least still smoldering social issues. Bigger Than Life is no exception, based as it is upon a controversial medical article by Berton Roueché entitled “Ten Feet Tall” published in the New Yorker in late 1955 (the script was subsequently worked on by numerous uncredited writers including Clifford Odets, Ray, star James Mason, and novelist and film critic, Gavin Lambert).

On a surface level, Bigger Than Life might ultimately seem a rather conservative film. Its social critique appears to be founded upon the dangers of drug-taking, ideological extremism and divergence from social norms, and its final reinstatement of the family, as the ultimate, enclosed social unit, might seem to be the icing on its status-quo (re)affirming cake. Even its central concern, the dangerous side-effects of cortisone, might seem a little apolitical, unfocused and not exactly urgent (though I think that this is probably the point). But beneath this, and I think it is more readable and “there” than mere subtext, can be found a rigorous questioning of the familial, religious, political and educational values that structure everyday American life (specifically in the mid-1950s). The film is very open about this central concern; in an early scene before his drug-induced “rebirth” the protagonist (Ed Avery, a school teacher, wonderfully played by the often-great James Mason) casually comments on the boredom and averageness of his suburban life. But it is indicative of the balance, understanding and complexity of Bigger Than Life that the spectator never really looks down upon these representations of bourgeois everyday life, but neither do Ed’s inflated critiques of it (relating to its small-mindedness, mediocrity and mundane repressiveness) generally pass by without the stinging ring of truth. Also unsettling is this society’s ability to absorb and incorporate Ed’s thinly veiled fascism (best illustrated by the parent-teacher night sequence in which some parents, after hearing his tirade about the principles of tough-love education, want to make Ed Principal).

At its heart, Bigger Than Life is social critique masquerading as a portrait of psychosis, in which the taking of drugs doesn’t distort perceptions outright but enlarges and clarifies them. It is a film about seeing too clearly and, thus, recognising the repressive underbelly of a particular American ’50s mindset, existence and representational system (suburban, consensual, middle class, institutional). In the process, it illustrates a fascinating condensation of life-long delusions of power; a lightning procession through the life defining stages of childhood (Ed, in the grip of his illness and weak as a kitten, being cradled by his wife), work (Ed as over-achieving, “progressive” and demanding teacher), parenting (the desire to live for and through children), and the god-like wisdom of old age (Ed’s murderous but “divine” threats to his own family).

Yet, the greatness of Bigger Than Life actually lies in the gentleness and subtlety of this social critique. Ed’s cortisone enhanced psychosis is the site for excessive and larger-than-life situations, but these enlarged emotions, situations and actions are always couched within “believable” frameworks. Thus, Ed’s ascent and descent into psychosis (or madness, really) is prefigured by elements and events that precede his illness (and subsequently the taking of the drug which seemingly produces but actually amplifies these warped but pre-existent perceptions). This illustration of the close proximity of seemingly divergent states – or what happens when niggling doubts and small prejudices are given full reign – is amongst the most significant achievements of the film (alongside its bravura rendering of space and environment and the way its human characters are placed within each), situating a set of extreme, unblinkered and despotic values just beneath the surface of daily life. And, inevitably, this is what Ray’s film is about. He takes a fashionable and controversial topic, the recently documented side-effects of the wonder drug cortisone, and skews this into an examination of dominant values and value systems; education, medicine, religion, marriage and family.

This open critique of social institutions is one of the key reasons why the film is often included within the genre of family melodrama (although the film “frames” its exaggeration and “realistically” documents everyday suburban life in a fashion unlike much of Douglas Sirk’s contemporaneous work – though There’s Always Tomorrow [1956] is indeed a much closer and more resonant fit). Another reason for the film’s common inclusion within this minutely documented and analysed genre is its treatment of mise en scène, particularly colour (dynamic colours like green and orange are expressively splashed against a sea of monochrome) and composition – its almost architectural and spatially confining use of the cinemascope frame, and how it circulates, places and over-signifies objects, is indeed extraordinary. Thus, the staircase, an often highly loaded and contested symbolic site in the family melodrama, occupies a central dramatic and ideologically defined place in the final cataclysmic scenes of the film. Also, the football which ironically marks Ed’s brief success as a college footballer, takes on an increasingly complex significance as it becomes the chief means of communication across the film between demanding father and harassed (and disappointingly “average”) son. At first it is pumped up as a sign of Ed’s reinvigorated and almost careless (witness the indoor football match) attitude to routine daily existence. Subsequently, it becomes a cipher of the father’s disappointment with and physical superiority over his son, and, ultimately, the central focus of the “failed” final gesture of appeasement between the two.

Another central and highly commendable achievement of the film is its ability to imbue its main characters, in particular the endlessly harangued and compromised wife (Lou, subtly embodied by Barbara Rush), with a sense of grace and worth. Ray’s films are often populated by curiously sympathetic characters who attempt, often hopelessly, to understand the emotionally troubled protagonists who rail against them (see, for example, the try-hard, wishy-washy father in Rebel Without a Cause). Also, as the film progresses religion takes an increasingly fundamental position, occupying centre stage in the final showdown between god-like father and sacrifice-like son. This reliance upon religious metaphor and biblical parallel produces what is perhaps the most satisfying and daringly dramatic moment in the film. Upon returning home from Sunday service Ed (his black clothing and performance an intriguing echo of the demonic Mercedes McCambridge in Johnny Guitar [1954]) declares his intention to kill both himself and his son in a re-enactment (or restatement?) of God’s missive to Abraham to kill his own son as proof of his faith. As his wife desperately corrects him, “But God stopped Abraham”, Ed firmly proclaims the ultimate and inevitable critique of the social structures that surround, define and organise his existence: “God was wrong”.

If Abraham is ultimately separated from a common murderer (and from committing the heinous crime of infanticide) by his faith, then where is its equivalence in Ed’s entropic, confused and despotic world? It is soon after this, as Ed approaches his son for the blood sacrifice, that the football returns in a cruel reinstatement of Ed’s inflated (and subsequently deflated) ego. As Ed ominously towers over him (bigger than life indeed), his son blindly holds the football aloft, uncertainly illustrating either the acceptance of his fate or an incredible misunderstanding of the very real psychosis his father is suffering (not consciously knowing either the full and dangerous aptness of the object he holds aloft). In the face of such a complex, contradictory and over-signified object Ed’s focus and resolve shatters (like the fragmented mirror that Lou smashes earlier in the film, a hoary representational device reinvigorated here to emphasise the close proximity of apparently divergent psychological states). On another level, the staging of the final phase of Ed’s addiction across the Easter holiday (he is “resurrected” on Easter Monday, of course) provides another pertinent, over-ripe and somewhat contradictory metaphorical layer to the film. This subtler, and more controversial pairing of Ed with Christ, attempts to cut through and move beyond the petty social structures that surround them. It is also intentionally buried within the film’s multi-layered metaphorical structure. It is this mixture of grand themes and banal consumerist objects, over-riding institutional structures and everyday life, barbed social critique and social understanding that makes Bigger Than Life such a complex and contradictory work. These elements, alongside its technical virtuosity, stylistic audacity, dynamically staged individual scenes (Ed’s rant on parent-teacher night – fascist and Darwinian – is both a horrifying and strangely edifying performance for anyone who has ever been a teacher), and high level of performance, help qualify it as one the richest and most surprising films made anywhere in the 1950s.

In the end, the film’s movement towards a nihilistic endpoint is inexorable, as the grand ideas of “inflated” Ed are washed against the mediocrity, disappointment and banal rigidity of the world around him. In keeping with this, the constructed environment of Bigger Than Life is full of small, ironic pleasures (for the audience but definitely not for Ed). For example, the travel posters which dot the walls of the Avery home have a kitsch, cocktail-exotic ’50s feel to them (in fact the early bridge party scene in the Avery home seems to noticeably lack such a “lounge music” score – one feels it should be there). Subsequently, the world around and outside of the Avery home seems both accessible and consumable (a kind of modernist ’50s internationalist utopia), but this global village is also reflected in, trapped and defined by the cheap print and petty materialism of the bourgeois suburban household. It is inescapable.

In its final scenes, Bigger Than Life’s ultimate reinstatement of the family – a move typical of the family melodrama (though equally ironically rendered in a film like There’s Always Tomorrow) – is undermined by the precariousness of Ed’s recovery and our memory (though probably his wife and son’s too) of his past actions. Upon waking from the nightmare of his drug-addled state, Ed replaces his paranoid visions of and identification with the “new” – but very Old Testament – Abraham (who would now kill his own son) with the emancipative visions of another Abraham: “I walked with Lincoln… Abraham… Abraham”, Ed intones. Thus, Ed tries to contain his previous psychotic, murderous and highly egotistical state within the metaphorical frame of the “Father” of the new America. His walk with Abraham is clouded by delusions of grandeur, tolerance and reunification, and the spectre of emancipation and education.

Ed Avery becomes a man for his times, deluded into believing in an illusion of freedom, idealism and emancipation weaved into the fabric of modern consumerist America. But he also remembers, if only vaguely, the very real threat he posed to his family. In the end, as he beckons to his wife and son to come “closer, closer”, one must ask just who Ed is: everyman; Christ; Abraham; the great emancipator; a rebel without a cause; society itself; an empty vessel; or just a closet despot carried away by his own petty expressions of power?