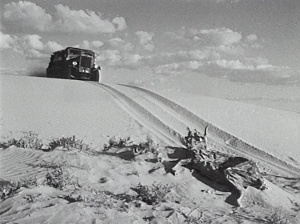 At the time no one seemed quite sure why a little Australian movie, let alone a documentary, was on the playbill at all. The first Sydney Film Festival opened on a cold winter night, 11 June 1954. It screened in four halls over four days, offered 1200 tickets at one guinea each, and sold out. The films screened included Jacques Tati’s Jour de fête (1948), René Clair’s Sous les toits de Paris (1930), Roberto Rossellini’s Germany Year Zero (1947) – and John Heyer’s The Back of Beyond. Amid such a wealth of world cinema, the screening of The Back of Beyond seemed to represent a rather parochial moment in cinema history: but the film today remains one of the most successful documentaries ever shot in Australia and one of the most widely admired internationally.

The movie itself is a dramatised documentary much in the style of such dominant and classic Griersonian British Crown Film Unit Productions as Night Mail (Harry Watt and Basil Wright, 1936) and Fires Were Started (Humphrey Jennings, 1943). Despite the lack of significant initial attention, The Back of Beyond quickly went on to grab a BAFTA nomination and win the Grand Prix at the Venice Film Festival. The film was produced, written (with his wife Janet) and wholly directed by John Heyer, who had left the fledgling National Film Board in 1948 to head up the new Shell Film Unit – a career move that mimicked that of Sir Arthur Elton (in England) who moved from the Ministry of Information, where he was Production Chief (Film), to head up the postwar Shell Film Unit and ended his career there.

Heyer’s brief for The Back of Beyond was to make a “prestige” film that would capture the very essence of the Australian outback way of life and the (primarily white) men who lived and worked there. In this it was very much a film of its time, a work designed to project an image of Australia to the world. Viewed from over fifty years later, and in the light of the recent hyperactive ballyhoo over Baz Luhrmann’s Australia (2008) and its adoption as an emblematic vehicle for the selling of Australian Tourism, there is some irony in all of this. This 1954 documentary is equally (and more authentically) ambitious in its sweep and aims: the film shoot itself took a heroic three months, with the crew travelling through almost the entire Central Australian Desert.

The Back of Beyond follows real life mailman Tom Kruse (1) along the over 500 kilometres of the Birdsville Track between Maree, South Australia and Birdsville in South West Queensland. His two week odyssey takes Tom over every sort of dreadful road and track, sand dunes, flooded creeks and endless and dreary flat plains. (His truck, a Leyland Badger built in 1936, finally gave up the ghost in 1957. If you pay close attention to the truck as it rattles along, you’ll see that The Drover’s ancient banger in Australia bears a striking resemblance to this swaying, bouncing collection of pots and pans, shovels and crowbars!)

Cameraman Ross Wood’s camera follows all the way, and Wood, who would go on to film some of the best cinema and TV commercials for, naturally, Qantas in the 1960s and beyond, delivers crisp, classically framed images in the style of Robert Flaherty and Pare Lorentz, an epic feat of luminous 35mm black-and-white cinematography that might win an Oscar even now.

Between 1930 and 1960, for over 20 years once a fortnight, through summer heat or rain, when Tom had the Royal Mail contract, the folks along the Birdsville Track never missed their post. But the film is more than a simple odyssey. In its digressions and complex narrative form, The Back of Beyond goes beyond the more classical restraints of the familiar information documentary and moves into the poetic.

Heyer’s film is quite complex in conception. For example, there are dramatised scenes (with locals playing the roles) including the story of two children losing their way in the desert after the death of their mother on a lonely property. This final tale adds to the national mythology of “lost children” that is such a noted feature of nineteenth century writing (see, for example, several stories by Henry Lawson and Barbara Baynton). Sally and Roberta, the vanished sisters, are offered up as the classic sacrifice of the innocent to the relentless desert – the fate of those who can’t “read” the Land. The roll-call of the dead includes the mother of the lost children and those matter-of-factly chronicled in the diary of the Birdsville policeman on The Back of Beyond’s voiceover: “Where the policeman can close the door of his station at sunset and write in his diary: January 22 Thomas Crow appears out of his mind. Sub-inspector King shot himself on the police station verandah. Another hot day.”

The Back of Beyond reminds us repeatedly of the importance of being able to learn how to survive in the Outback. The “lost children” sequence is a cautionary tale: in the scene immediately following this, at Birdsville, an Aboriginal woman teaches the local kids, black and white, her traditional desert knowledge. The narration itself alternates between Kevin Brennan sonorously speaking the commentary and a chorus of other voices (2): the mailman, women nattering on the two-way radio and most memorably, an aboriginal man (Malcolm, once Father Vogelsang’s student) in the sandy ruins of the old Lutheran mission where he grew up: a scene somewhat condescending (at the very least) in the light of debates around the Stolen Generation. These multi-layered sequences are an intrinsic part of the fabric of Heyer’s film and owe a clear debt to Humphrey Jennings and Stewart McAllister’s great 1942 documentary Listen to Britain.

Viewed from the distance of over half a century, The Back of Beyond is Heyer’s finest work. It’s a lyrical film, shot entirely on location and in the most difficult circumstances – a brave decision rewarded with some of the most memorable location cinematography of the period, capturing a now utterly vanished outback world (3).