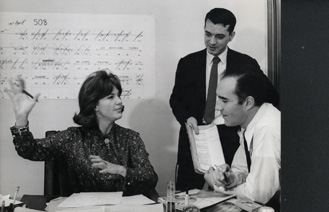 Film history is full of byways and back alleys, ‘little histories’ that weave their way on the margins and tributaries that traverse the canonised super-highways of film history. Leave the super-highway and interesting things start to appear.

When, in the light of a potential 50th anniversary tribute to the French New Wave, Sally Shafto proposed that we consider looking back at the movement, not from the perspective of a Jacques Rivette or Jean-Luc Godard, but rather through a focus on one of their collaborators, Charles Bitsch, we did not exactly ask, “Charles who?” His name was, of course, familiar to us. First, as a contributor to Cahiers du Cinéma in the 1950s and, second, for his sustained association with Godard throughout the ’60s. However, we were surprised at how much more was to be revealed.

Seen from the eyes of, say, a Rivette or Godard, the history of the New Wave is bound to be different from that of an assistant director or cameraman. And while the broad view remains substantially the same, the perspective alters and, from that alteration, a whole myriad of tiny details emerge that enrich the view substantially. It is the kind of historical research that, as Shafto puts it in her introduction to the Bitsch dossier, “teases out social history from small events”.

There is a sense in which Bitsch seems the ‘everywhere-everyman’ of the French New Wave. He was at the heart of Cahiers du Cinéma in its formative years. His knowledge of English meant that he was the designated conduit between the journal and the many Hollywood directors that passed through France. The list of interviewees is impressive and no doubt helped propagate the journal’s stance on la politique des auteurs: Orson Welles, Alfred Hitchcock, Anthony Mann, Nicholas Ray, Vincente Minnelli.

In one way or another, and to a greater or lesser extent, Bitsch worked with almost all of the key directors of the New Wave: Rivette, Claude Chabrol, François Truffaut and, of course, with Godard on such landmark films as Vivre sa vie: film en douze tableaux (1962), Le Carabiniers (1963) and Alphaville, une étrange aventure de Lemmy Caution (1965), to name but a few.

Less well-known to us is Bitsch’s own career as a director, which Luc Moullet’s appreciative essay “The House or the Chaos” justly rectifies.

Our thanks to Sally for her sterling work in assembling the dossier and, of course, to Charles Bitsch, without whom it would not have been possible to begin.

Our general thanks go to all our contributors for their impressive range of articles.

Finally, a word of gratitude for the volunteers who worked on this edition: Alice Burgin, Hana Lo Bianco and Vanessa Rinvenuto.