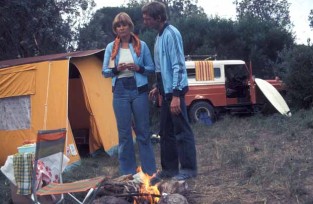 When did you write Long Weekend?

I was writing episodes of Bluey at the time, and I wrote Long Weekend as a way of getting out of what I should have been doing. Again, it was written very quickly – 10 days or so.

Do you like working on several projects at once?

I don’t have any choice, because I can’t afford to knock work back. If I have only two projects going at once, I start getting worried about unemployment.

Long Weekend is essentially a two-handed piece, though nature could be considered a third reference.

Yes. Nature is supposed to be the hero of the piece. The two characters, Peter [John Hargreaves] and Marcia [Briony Behets], are pretty unsympathetic. They invade the bush, and the bush deals with them.

Why do you say the bush is supposed to be the hero?

Isn’t it? Perhaps it hasn’t worked. Long Weekend was experimental, and it relied on a number of things to work. Unfortunately, the bush comes across as a threat too early; it should have emerged as a threat only after the audience had sympathized with the animals. And I don’t think that sympathy is there.

Long Weekend would have been much better if the audience had been told at the beginning that Peter and Marcia were going to die. This way, it wouldn’t have had to sympathize with them, and could have concerned itself solely with when this was going to happen. Such is the essence of suspense.

The ending, where Peter is killed, comes as a shock. Was there any other way of ending the film?

A large slab of the script was omitted because of the difficulty of working with animals. I wrote an enormously complicated sequence for near the end where the animals give Peter a second chance. They want him to wise up, and he is at the point of doing so when he hears a truck in the distance. He dashes off to the highway, and the animals decide there is no hope. Poetically, they leave it to another man to kill him.

Of course, the animals can’t tell you that they are the sympathetic characters. You have to rely on music, and the way things are shot. Again, unfortunately, the music in the opening sequence is very heavy, and there is a sense of menace about the animals.

Are Peter and Marcia a typical Australian couple?

No. I think the film could have been set anywhere. We all go camping with the idea of getting closer to nature, armed with cans of Mortein and God knows what else.

Long Weekend is not supposed to be a heavy environmental statement; it is just a very condensed way of saying that nature is capable of looking after itself if man gets too out of line.

Are you happier with Patrick or Long Weekend?

I think Patrick was a safer story to do; it’s more traditional. You know who the villain is from the start, and it develops along traditional suspense lines. Long Weekend is far more experimental.