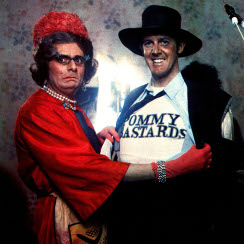 Originally published: in a monograph on Bruce Beresford, included in Cinema Papers, No. 28, August-September 1980.

Though its intent is every bit as satirical as the celebrated comic-strip created by Barry Humphries for the London journal Private Eye, The Adventures of Barry McKenzie (Bruce Beresford, 1972) is often so determinedly farcical that the best of the satire lies buried. Barry McKenzie (known to his mates as Bazza and played in the film with engagingly verisimilar vacuity by Barry Crocker) is a lantern-jawed Childe Harolde in a squatter’s hat. Accompanied by his Aunt Edna (Humphries), he makes the obligatory trip to the Old Country, where he is rubbished by the Customs, ripped off by taxi-drivers, seduced by glamour girls, exploited by trendy folk-singers, mishandled by the National Health, harassed by police and finally appears, with riotous consequences, on the BBC.

These episodic misadventures run a hyperbolic gamut of the received Earl’s Court wisdom: Poms, who habitually attempt to exploit and patronize Australians, are themselves sexually depraved and repressed, as well as being gullible and fallible.

Beresford sets out to be outrageous (an important factor in the film’s box-office success, scored in the rosy dawn of Australia’s newly-enlightened censorship regulations) and takes a positive delight in juvenile scatology and debauch. Sight gags (gaffes might be more apt) include such flights of inspiration as the hero chundering on the head of a psychiatrist who is examining him, or one in which Bazza’s mates form a bucket-brigade of urine-filled beer cans.

Yet there are times when Beresford’s essential craftsmanship is apparent amid this riot of vulgarity, as in the effective balancing of Humphries’ most extravagant creations, Bazza and Edna. The film Edna, the emergent honeyed horror of the Humphries stage show, is the distaff of the ocker coin, as sexist in her Women’s Weekly genteelism as is Bazza in his male-bonded extraversion. They share a reciprocal clarity, the grains of truth uncomfortably apparent within the monstrous caricatures.

The pacing of this film is a mite perverse. At times it clatters on rumbustiously through sequences from which every possible laugh has been squeezed (for example, a Keystone gag in which a trench-coated detective, played by Dick Bentley, is repeatedly squashed behind suddenly-opened doors).

The Adventures is so determinedly gauche, so doggedly flagrant that, looking at it again after eight years, I find my reaction still somewhere between awe and disbelief. A lot of Australian filmgoers had no such misgiving.

Unlike most sequels, Barry McKenzie Holds His Own (Bruce Beresford, 1974) is a marked improvement in almost every way. Containing the expected quota of chundering, tube-tossing, ocker boorishness and leery double entendres, it easily tops The Adventures visually, in content and even, at an admittedly jejune level, thematically. Barry Humphries gives a taste of the more acid satire to come with one of his prime latter-day lampoons, a “Forward” extolling Australian culture by the clottish “Senator Douglas Marston”. Here is the 1970s development of the cultural cringe, making us shrink with embarrassment at the Babbitry of our public figures. 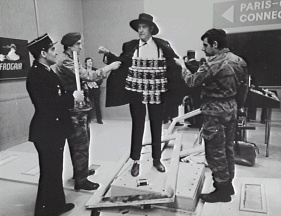 Then Beresford returns to where The Adventures left off, as we see Bazza and Aunt Edna on a plane bound for Paris. A quick roundup of national stereotypes, from a lecherous French pilot to a team of can-popping Australian tourists, soon establishes that we are still in Bazza country.

During their brief Paris sojourn, it is pretty much the mixture as before, though the satire is certainly sharper and better articulated. The thrusts at the arts-funding policies of the Whitlam Government in particular strike a caustic, if somewhat ungrateful, note. Bazza boasts to an expatriate Leftist (Dick Bentley): “Back in Australia, we’ve got culcher up to our arse-holes now, mate!” These insights notwithstanding, he’s still at the bottom the old Bazza, vomiting from the Eiffel Tower as the Fosters cans foam like Roman candles and Edna confides that Paris is “as cosmopolitan as Sydney”.

Beresford then sends Bazza baying over new ground in a farcical, loosely constructed chase yarn. Edna is kidnapped by agents of a Transylvanian vampire in people’s democratic clothing, one Count Plasma (Donald Pleasance), because they think she’s the Queen in mufti (her tiara fools them). Bazza and his twin brother, the Rev. Kevin McKenzie (Crocker), a trendy cleric who happens to be in Paris to lecture on “Christ and the Orgasm”, lead a rescue party of can-wielding ockers and sympathetic Australian diplomats, including the Ambassador (Ed Deveraux), resplendent in National Dress of shorts and long socks.

There are indications along the way that, in this film, Beresford began to feel surer of himself. One is the relaxed pleasure he takes in parodying film genres – Dracula, Kung-fu, British War Heroic, among others. (Humphries’ script is in the same spirit. Introduced to a French prostitute, Bazza is advised: “You’ll have to butter her up a bit, it takes two to tango!”)

Another pointer may be seen in the director’s greater concern for suiting the film’s visual style to its satiric thrust. Not always successfully, but some sequences, such as one in which Bazza and entourage move through an Australia House foyer full of happy barbecue parties, reveal a homogeneity lacking in the television-revue skittishness of much of The Adventures.

Barry McKenzie Holds His Own will screen at the Melbourne International Film Festival on Friday 8 August at 9:15 PM.