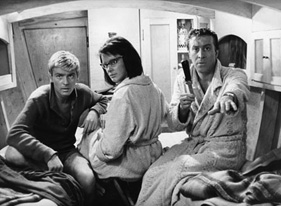 With its oblique but unrelenting psychological violence, politically charged nihilism and incisive visual forms – the images in this film, like the knife of its title, will cut you if you get too close – Roman Polanski’s Nóz w wodzie (Knife in the Water) is not only one of the filmmaker’s best films, the only feature he made in his home country and native tongue before emigrating on towards fame and infamy and back towards fame again, but also one of the most enervating treatises on human relationships committed to celluloid.

A wealthy middle-aged couple, Andrzej (Leon Niemczyk) and Krystyna (Jolanta Umecka), pick up a young (20-something?) hitchhiker (Zygmunt Malanowicz) on their way to a lake where they plan to go boating. At once both fascinated by the young man’s vitality (he stops their car by standing in the middle of the road) and keen to better it by asserting his own, Andrzej, on a mean-spirited and ultimately fateful whim, invites the hitchhiker to join them for a day and night on the water. The hitchhiker, fuelled by insecurity disguised as cockiness – that naïve, child-like need to prove oneself – accepts. The rest of the film documents the competition that ensues between the two men, however understated it may occasionally be, as each attempts to assert his masculinity by denying or calling into question that of the other. Andrzej boastfully shows off his knowledge of sailing and proclaims himself captain; the hitchhiker, as if in retaliation, scales the mast and reclaims the boat, momentarily, as his own. The hitchhiker, wielding a blatantly phallic switchblade, plays Five Finger Fillet on the deck (without even looking at his hands) and later starts throwing the knife around inside, all cool and devil-may-care; Andrzej, having failed to match his rival’s level of proficiency with the knife, at first hides and later drops it overboard in a symbolic (though none too subtle) tilt at castration. Meanwhile, Krystyna, seemingly bored by these displays of bubbling testosterone, serves first as a witness to the men’s competition, then as the prize they are playing for, and finally as an active player in the game herself. (Visually, these shifts in Krystyna’s role are marked by her striking physical transformation from straight-laced housewife to bombshell and back again, as though the film were trying to suggest that a straight-laced housewife would be unable to assert herself in a three-way battle for power against two men.)

With only the most perfunctory dialogue on hand to communicate the occasional hint of character, back-story or emotion (Polanski and his co-screenwriter, Jerzy Skolimowski, deliberately pared back the dialogue as much as possible), the film’s sounds and images are charged with conveying – with reifying – the bulk of its thematic and emotional content. Along with the film’s deceptively genial free jazz score, which lulls the viewer into a false sense of security at precisely those moments when the relationships between the characters take another irrevocable turn for the worse and the whole film slides a little closer to its unavoidably unpleasant conclusion, Polanski’s use of the boat, as both a sign (of wealth, privilege and, especially, power) and a space (of isolation and claustrophobia), is integral to the overall success – or at least to the wonderfully unsettling mood – of the picture.

The boat – which is to say, the smaller kind of boat, the dinghy or yacht – is often employed in the cinema to serve some specific functions. Along with the waters upon which it invariably floats (oceans, lakes, rivers, etc.), teeming as they are with their own entrenched connotations and deep-seated mysteries, the boat is used, like any other setting, both symbolically and as a means of organising bodies in space. To the extent that any space or setting inevitably influences the formal operations and thematic content of a work, the boat, as point around which a picture’s form-content matrix might pivot, is in a sense exemplary.

Considered broadly in this manner, the cinematic boat tends to (or at least can) be: (1) a site of isolation, claustrophobia or existential angst, floating in the middle of a hostile and alien environment (in its way, the sea is not dissimilar to outer space – not for nothing do we call space vessels “ships”); (2) a site of interpersonal tensions from which there is no easy escape (the same may be said of planes and, that favourite obsession of the cinema, trains – think Hitchcock, particularly The Lady Vanishes (1938) and North by Northwest (1959), or even, more recently, Wes Anderson’s The Darjeeling Limited (2007) – though unlike small boats, with their ability and, in the cinema at least, tendency to drift aimlessly, planes and trains – and automobiles, to complete the “Hughesian” triad – are more or less always moving the characters and narrative forward towards a destination, even as they generate a certain sense of claustrophobic ennui); and (3) sudden explosions of latent violence (which by virtue of the aforementioned isolation are usually perpetrated without witnesses). I’m thinking of the dinghy in The Talented Mr. Ripley (Anthony Minghella, 1999), the yachts in L’Avventura (Michelangelo Antonioni, 1960) and Dead Calm (Phillip Noyce, 1989), the lifeboat in, well, Lifeboat (Alfred Hitchcock, 1944), and, of course, the yacht in Knife in the Water.

As a space, Polanski’s boat demands tightly-packed compositions and configurations of bodies, particularly inside the cabin with its restrictive physical dimensions. Often, all three characters appear in the frame together, one of them closer to the camera than the others, the space between them negatively charged with the absence of all empathy and goodwill. The centre of the image feels like it could freeze over at any minute, even when the characters are interacting in a seemingly reasonable, civil fashion. Outside the cabin, where the camera has more freedom to move, Polanski nevertheless continues to reinforce the claustrophobia (and paranoia?) of the characters with these three’s-a-crowd framing devices and oppressive close-ups (although there are fewer here than in the interior scenes). The physical claustrophobia of the characters is thereby reframed as a psychological one that they carry with them into the open, and the imposed visual logic of the cabin, the frames-full-of-bodies which actualise this pathology at the level of the image, becomes the overriding visual logic of the film.

At the same time, Polanski litters these exterior scenes with wide shots that emphasise the ominous and oppressive sense of isolation that one inevitably feels in the middle of a vast body of water, encouraging an uneasy tension between these and the claustrophobic close-ups. This sense of isolation is heightened by the increasingly noticeable absence of other people in the picture. There are no cars in the distance, no one walking along the bank. With the exception of the unseen vandals who steal the car’s windscreen-wipers sometime between the beginning of the film and its conclusion, and the voice of the boxing commentator on the radio, there are no other signs of human life to be seen or heard anywhere, not one. Visually, the cold and empty greyness of the shoreline suggests a pre- (or is it post-?) social landscape.

Indeed, to the extent that society – and therefore class – is present at all in the film, it is implicit and shadowy, notable primarily for its absence, suggested only by the presence or fleeting mention of material objects and possessions: Andrzej and Krystyna’s car, their clothes (matching sunglasses, dressing gowns, etc.), a silly blow-up water toy (“Give me the crocodile!”), a four-room apartment in the city, and, obviously, the boat. There are undoubtedly elements of both class and generational struggles in the antagonism between Andrzej and the hitchhiker. Nevertheless, in relocating the narrative from an explicitly social realm to a spatio-temporally abstracted state of nature, Polanski invites us to read the film on a more basic and fundamental level. While far from apolitical (its eschewing of historical consciousness and social realism was at the time a political statement of its own), Knife in the Water is less about class or generational struggle than it is about the base-level battle of all-against-all, a stridently anti-humanist exploration of the inherently violent interpersonal power struggles at the heart of all human interaction.

These power struggles come to a head in the final section of the film, when Andrzej and the hitchhiker finally come to blows. Until this point, Krystyna, the boat and the knife have formed a kind of symbolic triumvirate: in order to assert their masculinity over that of their rival, the two men have struggled to gain possession of and hold power over each of these three objects. Hence Andrzej’s determination earlier in the film to show off his sailing prowess, which throws the hitchhiker’s complete lack of experience into sharp relief, and the hitchhiker’s determination in response to pull the boat through the reeds unassisted. It is this same symbolic battle that leads to Andrzej’s (ultimately failed) attempts to appropriate the hitchhiker’s knife and to the hitchhiker’s (ultimately successful) attempts to appropriate Andrzej’s wife.

However, the struggle is not merely between the two men, but also between the men and the woman. In the final section of the film, Krystyna refuses to remain a witness or prize (refuses, in other words, to fulfil her until now purely symbolic function) and instead becomes an active, self-interested agent in the proceedings. With the knife in the water, as the title told us from the outset it eventually would be, both men find themselves symbolically castrated and are unable to assert their power over the boat, the woman or each other: the hitchhiker vanishes into the lake, presumed drowned, and Andrzej, having fought briefly with Krystyna, who tells him that she hates him, swims back to shore on his own.

It is Krystyna, not Andrzej or the hitchhiker, then, who ultimately takes control over the boat, the final site and object of power. When the hitchhiker returns, having hid behind a buoy (more childish games!), Krystyna slaps and seduces him. Far from a “victory” for the hitchhiker, however, this is his final humiliation: Krystyna, we can safely assume, is only sleeping with the boy so that she might tell her husband, which she does in the film’s final scene, thereby gaining the upper hand in that relationship as well.

In the end, the hitchhiker, his masculinity reduced to the instrumental status of a bargaining chip in another man’s marriage, a slap in the face to both him and his rival, and Andrzej, his masculinity called into question by his wife’s willingly confessed betrayal, are both defeated, symbolically and actually. Indeed, they are ultimately revealed to be two sides of the same coin, each man in a sense containing the other and needing the other to define himself against. Both men (and their character traits) contain trace elements of their opposite: rich/poor, old/young, experience/inexperience, maturity/youthful cocksureness. We might recall that, in the opening scenes of the film, Andrzej, who has brown hair, was wearing a cream-coloured suit, while the hitchhiker, who is blonde, was decked out entirely in black. One the ying to the other’s yang. (This tonal opposition is repeated in the interior cabin scenes, where Andrzej wears a snow-white dressing-gown while the hitchhiker is leant a black one.)

Contrasted against the petty manipulations and games of the two men, Krystyna’s seduction of the hitchhiker constitutes the film’s only radical act of interpersonal violence: she is the only character in the entire piece willing to radically change the status quo and tip the balance in her favour. Similarly, she is the only one who understands the rules of Polanski’s nihilistic universe and agrees to play by them. In any case, she deserves to captain the ship back to shore in the final scenes of film. Not for nothing, one can’t help but note, do she and the boat share the same name.