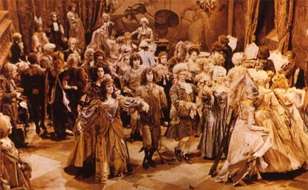 Dance of the Vampires/The Fearless Vampire Killers or: Pardon Me, but Your Teeth are in My Neck (1967 UK 107 mins)

Me say
Check with me, not me body
Mentally, not physically
There’s a way, you can-a say
Yes it’s my identity

Me say no use me, abuse me
I’m flesh and blood

“At what precise moment does an individual cease being who he is?”

James Joyce’s short story collection Dubliners (1914) – a state-of-the-nation diagnosis of a colonised city at the turn of the 20th century as culturally, socially and spiritually stifled – ends with “The Dead”, where snow blanketing the land confirms a general emotional paralysis (1). Roman Polanski’s last absurdist short, Ssaki (Mammals, 1962), sets two tiny human figures in a snowy landscape where their fighting, dishonesty and shirking responsibility prevent them from working together to cross it.

In Dance of the Vampires, just before she is carried off by Count Von Krolock (Ferdy Mayne) from a bathtub, the inn-keeper’s daughter Sarah (Sharon Tate) visits Alfred (Polanski) in the room he shares with his boss, vampire hunter Professor Abronsius (Jack MacGowran); she explains how bored she is with a life literally boarded up by her family. Later, as he dissembles the real reason for breaking into Krolock’s castle, Abronsius discusses the phenomenon of bats flying in winter, when they’re supposed to be hibernating:

I think we can look for the cause in the purely mechanical need to fight against the torpor of hibernation, to restore circulation by primary motion, to cause the vital limbs to work without thinking.

Paralysis; the freezing of human empathy; boredom; torpor. This is the “real” world in Dance of the Vampires, one of repressive, hypocritical conformity, where Sarah’s father Shagal (Alfie Bass) locks her up as protection from predatory men, yet spends his nights bothering the maid (Fiona Lewis) in her bedroom.

By contrast, we might expect the vampire realm to be a transgressive one, with an implicit threat/promise of sexual adventure and fluid identity. Polanski implies such an opposition by using the mirror motif, one which has had a special, complex significance in his work since his first international success, Dwaj ludzie z szafa (Two Men and a Wardrobe, 1958) (2), where, in the one bright spot of an otherwise gloomy parable, the wardrobe’s mirror alerts a young woman to a gang of thugs creeping behind her. Dance of the Vampires is structured around mirrors, around things, people and concepts being reflected, reversed, imitated.

The two main sites of the film, Shagal’s inn and the castle, face each other across the frozen landscape, with characters moving (or being moved) between them; characters are doubled (e.g. Krolock and his hunchbacked henchman Koukol [Terry Downes] correspond interestingly to Abronsius and Alfred; both Abronsius and Shagal freeze from over-exposure to the cold); actions, scenes and locales are repeated. But the mirroring here doesn’t produce an exact reflection: the protective garlic hanging from the inn ceiling becomes the colony of bats sleeping in a castle cavern; the opening scene of Abronsius and Alfred entering Transylvania to scientifically wipe out a localised contagion is matched by a closing scene where they leave, carrying the disease with them.

The key mirror sequence is the most dispiriting of all, as Abronsius and Alfred camouflage themselves as dancers at a midnight ball in order to rescue Sarah who has been groomed as sacrificial sustenance for an extended family of embalmed vampires (a very dry run for the elderly Satanists in Rosemary’s Baby [1968]). The mirror exposes them as humans with reflections, causing them to flee. Far from confirming this trio as alive, however, this reflection is a “harbinger of death”, a doubling that anticipates the loss of their souls minutes later (3). Earlier I suggested an opening opposition between conformist humanity and transgressive vampirism. But this ball scene, where decrepit vampires creak through antiquated dance patterns, like rusty automata, to the mechanical tinkle of a spinet, flanked by inert onlookers, reveals the vampire realm as even more lifeless, exploitative and spiritually bereft than that of the “real” world.

The careful mirroring that has patterned the film; the promise of transformation raised by the opening, when the film’s logo, M-G-M’s time-immemorial lion, morphs into a blood-dripping demon; the promise of crossing over to a different dimension of spirituality, routed physically by thresholds, passageways, doors, mirrors, windows, corridors, hatches etc. – all of these are illusory, and count for nothing; the snowy landscape becomes one of those bleak stages of the Absurd where all human endeavour is pointless, and historical progress impossible (4).

At the time he made Dance of the Vampires, Polanski was known as a director of contemporary subjects, such as Nóz w wodzie (Knife in the Water, 1962) and Repulsion (1965). This was his first period feature, a mode he would become increasingly identified with, in films from Macbeth (1971) and Chinatown (1974) to The Pianist (2002) and Oliver Twist (2005). Polanski’s view of history is perhaps best expressed in his film school short, Gdy spadaja anioly (When Angels Fall, 1959), where a worsening series of past events are viewed through the prism of a public urinal. (Is it a coincidence that Dance of the Vampires, his first feature in this historical mode, offers the first direct expression of Jewish experience in Polanski’s work? [5]) One of Dance of the Vampires’s most exquisite sequences – Krolock’s abduction of Sarah through a bathroom skylight, announced by snowflakes inexplicably falling, and concluding with her blood seeping onto the bath’s soap suds – was first rehearsed in When Angels Fall, when the old protagonist’s dead son crashes down to earth to take her away.

Dance of the Vampires is often described as “light-hearted”, “a loving parody of the traditional vampire film”, specifically those being made by the Hammer studio in the late 1950s and 1960s, Christopher Lee’s Dracula films in particular (6). A true spoof, such as Airplane! (Jim Abrahams, David and Jerry Zucker, 1980), or, more pertinently here, Carry on Screaming! (Gerald Thomas, 1966), does little more than exaggerate the superficial mannerisms of a genre until their original significance is no longer tenable.

Dance of the Vampires clearly does more than this, and belongs to the comic-horror tradition of James Whale (e.g. Bride of Frankenstein, 1935) and Tim Burton (e.g. Edward Scissorhands, 1990), where narrative and certain generic absurdities are treated satirically, but the genre’s essential themes and characters are engaged with profoundly, if idiosyncratically. This might explain why, in spite of the American distributor’s “humorous” renaming of the film (as The Fearless Vampire Killers or: Pardon Me, but Your Teeth are in My Neck), Dance of the Vampires failed to please an audience expecting easy laughs (7). Nevertheless, Polanski was able to use the genre, together with: borrowings from East European folklore and fairytales; Greek myth, silent comedy and cartoons (8) – to investigate characteristic themes and ideas such as the borders of identity; the influence of the physical environment on psychological experience; gender, class and power relations; voyeurism and restricted vision; sound and silence; movement and stasis. The result is his most engaging and underrated film, one as atmospheric and unsettling as his “straight” work.