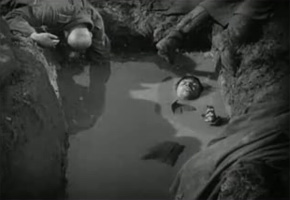 Of all the arts, for us cinema is the most important.

Get out and look for work. No one is going to feed you.

– Wife in The End of St. Petersburg

By 1927, the Russian Revolution had reached its ten-year mark with its social enthusiasm largely untarnished and its counter-elitism fully active, though Stalin was poised to take control of the entire government apparatus. Among numerous commemorative projects planned to celebrate the art form on which Lenin himself had most lavished the country’s scant resources, the two that immediately stood out were the competing revolutionary histories proposed by Russia’s reigning wunderkinds, Vsevolod Pudovkin and Sergei Eisenstein.

Both of these heroic productions were planned to grace the anniversary festivities – Pudovkin’s The End of St. Petersburg and Eisenstein’s October (also sometimes called Ten Days That Shook the World, after John Reed’s history of the revolution) – and both were officially commissioned by the Central Committee of the Communist Party itself in order to honour “the Bolshevik completion of the Russian Revolution”. Both elaborate productions were shot simultaneously in the city to dramatise the triumph of the masses, with each climaxing in the popular appropriation of the Winter Palace. At one point, Pudovkin’s crew was bombing the palace from the Aurora [battleship] while Eisenstein’s rival team was bombarding it from the Fortress of St Peter and Paul on the opposite side (1).

Originally planned to cover two entire centuries of Saint Petersburg history, and featuring bomb-throwing insurrectionists among idealistic commonfolk, Pudovkin’s project finally faced the camera as a boot-level narrative about a naïve country youth who finds himself forced by circumstance to seek work in the city, only gradually comprehending the economic forces his countrymen are fighting. When the boy and his mother first arrive in the capital, Pudovkin presents them from an Olympian height, shrunken to the size of ants by the city’s monumental scale (but by the conclusion, we see him anew, this time on an equal par with the grandeur of the city).

At this point in the production, having shown how the forces of repression had lured the peasant away from his natural sympathies and into a strikebreaking episode, the always nervous Pudovkin scrapped his earlier plans. Moving the more intimate drama to a considerably more epic scale, he now followed the Russian Army’s disastrous rout against the Germans, introducing historical figures such as the appeasing Kerensky as well as a controversial depiction of the wealthy women who flourished, twirling fans while picking at luscious, luminous grapes in the midst of widespread starvation. Through a furious montage of smoke, clouds and flames, Leningrad then emerges born, and “St. Petersburg is no more”.

An emotional coda has the wife of the Communist (one of the boy’s fellow villagers who had previously ventured to the city), established earlier as a woman determined to hoard her family’s sparse ration of food, now searching the grounds of the Winter Palace for her husband. On the way, she sees the Young Man who has survived the worst excesses of both war and revolution, with both characters now transformed by the struggle; instead of hoarding, the woman now feels compelled to share the food in her pail with all the defenders of the Revolution. Then, ascending the steps of the palace, she moves through the gilt décor and marble halls until she finally finds her husband (or is it his ghost?)

With Eisenstein’s production delayed by censorship sensitivities (his depiction of Trotsky, Stalin’s nemesis now exiled from Russia, had to be excised and extensive re-shooting required), Pudovkin’s production had no competition as the feature that would embody its homeland’s ideals at the gala 7 November 1927 premiere, providing an unshakably powerful narrative for the jubilee audience who were assembled to celebrate the Revolution’s first decade of achievement.

For all the surface dynamism of the film’s images, it was often their clash that provoked later comment. For example, Vlada Petric noted the symbolic contrast between the “black top hats of the businessmen standing in front of the stock exchange (photographed from a very high angle)” and “the faces of the dead soldiers scattered along the front-line trenches” (2). What now seems admirable – the heroic angles and epic style, with long shots contrasted with head-on close-ups – has often seemed schematic and predictable to subsequent critics, such as Richard Roud, who noted that Pudovkin’s “stock had fallen further than that of any ‘great’ director in recent years, and not without justice” (3). The influential David Thomson also complained that “Unlike Eisenstein, Dziga Vertov, or Dovzhenko, Pudovkin used images in an invariably dull way… very slow for all that the cutting is often so fast” (4).

Still, despite the future difficulties that Pudovkin would encounter both personally and professionally (5), his trio of silent masterworks – Mat (Mother, 1926) The End of St. Petersburg, and Storm Over Asia (Potomok Chingis-Khana, 1928) – still stand as unique and humanly accessible narratives, considerably more human than the overly schematic image-contra-image approach favoured by Eisenstein. Perhaps Griffith’s keenest student (who took sequences from Way Down East [1920] as models), Pudovkin brought a kind of purity to the screen that still lives on in Gilberto Perez’s words: “If Dreyer purified melodrama and made it spiritual, Pudovkin politicized it and made it militant” (6).