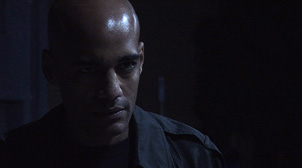 Melbourne-based, independent filmmaker Bill Mousoulis’ latest offering, A Nocturne (2007), is an intriguing reworking of the vampire genre. In a career spanning 25 years, Mousoulis has rarely treaded either genre or conventional narrative terrain. His films, rather, resemble raw, delicate, carefully devised offerings from filmmaker to audience in which the filmmaker shares his view of the world, humanity, desire, love, emotion. This view finds its formal expression not via conventional narrative or genre, but rather a certain realism that aims to honestly channel the emotional and spiritual world of its characters. Though A Nocturne may signal a new direction in Mousoulis’ œuvre of some kind, the film remains consistent with the themes and ideas he has explored thus far. As in previous Mousoulis films, A Nocturne sets up an opposition between commerce and art; mainstream and alternative space; the ruthlessness of capitalist society and the humanity of the artist.

The film begins with a woman playing Frédéric Chopin’s Nocturne in A flat major on the piano. A pensive close-up of the woman gives way to stark images of Melbourne CBD accompanied by a fierce hard-rock score and quick editing. Images of city workers scrambling city streets are infused with a menacing presence: Are they the victims or indeed the perpetuators? Is the world of commerce a living hell? As daylight fades and night-time settles, we are then introduced to our vampires, Z (Alex Spears) and X (Vanessa de Largie), inhabitants of a vacant, industrial-type warehouse. Here are our outlaws, living on the fringes of civilized society, waking to “another day in hell”. They haunt the night-time streets of inner-city Melbourne with their ghostly gait, solemn expression and deadly desire. The performances by Spears and de Largie are distinctive and enrich the film’s meditative, plaintive mood. Mousoulis often uses tableaux vivants to capture their ghostly presence, and to the actors’ credit their particular gestures, body language and facial expressions often signal an emotional state. These are, of course, less characters in the traditional literary sense than figurative presences, both within the film’s story world as ‘undead’ creatures who stand in opposition to mainstream culture and cinematically as entities that, in the main, exist through gesture, stance, facial expression. 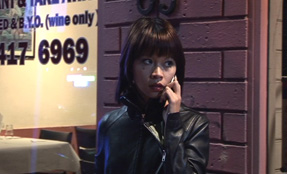 In their pursuit for blood, Z and X are occasionally accompanied by fellow vampire, Vee (HaiHa Le). Le’s performance is noteworthy. Her charisma and effortlessly urban attitude shine and the fact she is able to go from innocent member at the family dinner table in one scene to salacious, drooling vampire in the next and then to off-duty vampire conversing with her alter ego – all without distancing this viewer at least – speaks volumes of the performance.

The story of how Vee became a vampire is shown via flashback. Alone in an alleyway one night, she is accosted by X and Z, and bitten by X. The flashback of her being bitten gives way to a close-up of Vee, lying on her bed, her facial expression one of rapture and delight. Nocturne suggests that these ‘underworld’ creatures are alive with passion and desire in stark contrast to members of ordinary, conventional society, who go about their daily routine in a robotic, passionless manner. In fact, threatening Melbourne’s strait-laced society is a veritable underworld of vampires, disfigured men, deranged woman, angst-ridden beings – who all come alive at night, and who are the strange expression of the energies, desires and passions that society represses during the day. The question of to what extent their presence impacts at all on modern society – whether they ‘eat’ away at its structure – is one the film explores. 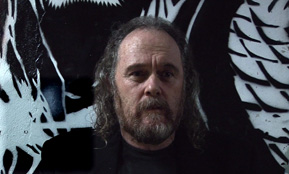 Connected to the Goth circle of vampires and a kind of ringleader figure for this ‘underworld’ is poet-cannibal, Seers (Patrick Boyle), a figure steeped in grief, mourning and loss, and for whom only poetry and cannibalism offer effective catharsis. Strangely, his hyper-sensitive feelings of love, even worship, for a young woman who we see only in a photo and whom he has lost, finds its expression in a form of mourning that collapses religious concepts and metaphors (eat this body, drink my blood) into literal acts. Consistent with the film’s ideology, Seers represents a perverse counterpart to normal, passionless society; the love that consumes him results in his consumption of others. The performance by Boyle is effective for the way it conflates spirituality and the profane, and the way he gives credibility to the notion that an extraordinarily sensitive human being would express their deep feelings through eating another.

Overall, the performances are distinctive and complemented by a rich cinematography (Shyam Ediriweera) and a highly evocative rock-industrial score that often works to signal turns in the characters’ passions or emotional state. While the narrative is minimal and tending to the abstract, there still seems room in the film’s story for greater character development. It is likely this would have added more depth to the film and better complemented its resonant exploration of philosophical ideas.

Mousoulis employs the vampire genre only then to question its central conceit. About midway through the film, a mysterious character named Rola (Jennifer Levy) enters the vampires’ warehouse setting. She delivers a monologue, mostly in French, that denounces our vampires’ way of life, calling it an “abomination” and questioning its “revolutionary” aspirations. From this point, Z and X are left floundering, their raison d’être undermined. Z is eventually killed by a member of the corporate world and X fades into a crowd. Rola’s monologue is crucial in the way it opens up understanding of the vampires Z and X as philosophically and politically charged ‘creatures’ and also the way it completely re-routes the film’s narrative.

A Nocturne is book ended with quotes from Friedrich Nietzsche that provide a context for the film’s ideas. The opening quote comes from Nietzsche’s The Gay Science:

The strongest and most evil spirits have so far advanced humanity the most: they have always rekindled the drowsing passions – all ordered society puts the passions to sleep.

Unlike Mousoulis’ previous films, this is the first to explore philosophical, intellectual ideas and themes less through close character study than genre reworking. The figure of the vampire is a rich and fantastic icon that easily lends itself to horror-gore type genre material and/or existential-philosophical concerns (for example, Abel Ferrara’s The Addiction, 1995). Like Ferrara, Mousoulis opts for the latter and presents the vampire figure as the antithesis of ‘normal’ people in society; the two are opposites, like day and night. Unlike ‘normal’ people, the vampires are driven by passion and desire. However, to live off others is an inherently destructive and violent way of being in the world, and therefore Nocturne suggests that, while this existence may be oppositional, it is still problematic. 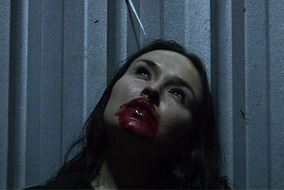 The mysterious Rola resonates perhaps because she is an alter ego for the director himself. Through her, the director’s ideas are channelled. The director deploys the figure of the vampire only to reveal its inherent shortcomings as a revolutionary figure. Yes, the vampire represents an alternative existence, a life driven by passion and desire, yet it also falls short of being an agent of revolutionary change or a model of alternative existence precisely because of its inherent “evil”. In this way, Mousoulis makes the vampire genre fit his own worldview; for him, life and innocence are sacred. Therefore, the destruction of these things is tantamount to being a “terrorist”. This then leaves open the question of what constitutes society’s ‘other’ and of how it is possible for revolutionary change to be affected. Fascinating questions that Nocturne throws up and leaves open.

Though his vampires are done away with, the director attends to this with a certain poetry and irony, and an overall tenderness that suggests he feels for and even identifies with these outlaw figures. Alone in an alleyway, Z is suddenly accosted by a man in a suit who, in a hyperbolic performance by Rod Lara, takes great pleasure in killing him. Lara obviously represents the evil work of corporate culture and the way it so easily and maliciously kills off individuality and ‘difference’. Meanwhile, as X disappears into the crowd, Mousoulis emphasises her vulnerability and humanity – the emotions and feelings of loss and aloneness that can be read on her face stand in stark contradistinction to the emotion-less office workers and city inhabitants around her. Ultimately, the final shot of our vampires occurs in some eternal space, though they’re in Victorian garb, in which they drink tea and walk through the park with gaiety and delight. The director reconciles their search for ultimate happiness.

Nocturne is clearly a film of ideas. And like many of Mousoulis’ previous work, it invites the viewer to draw their own conclusions. Its narrative is sparse, connections are left open rather than heavily signposted, and there is a clear tendency toward the abstract. In fact, once the eventual decline of Z and X has occurred, the film is taken over by a succession of shots of city life. We see crowds crossing intersections, people heading to and fro, tall city buildings, taxis lined up, rows of traffic, business men checking their watches, trams, buses, aeroplanes and so on. The sequence of shots gets quicker, the music more ominous, until the entire sequence reaches a dizzying crescendo of image and sound, and where it is clearly apparent that it is precisely the inexorable nature of this social world, driven relentlessly by profit than passion, that is the real violence and evil. It is at this point that Nocturne’s narrative transcends its characters and particulars to embrace the abstract idea of the destructiveness of society itself, not just the vampires, an idea the film is exploring throughout.

The question remains then how is this destructiveness to be combated? What remains a truly oppositional way of being? How can we live as humans or artists outside the constraints and expectations of society and social order? Is this in fact possible? How can we reclaim the passions? The passion to love, live, desire – all of these passions that are silenced and quashed by conventional society in its drive for profit. Nocturne leaves us with these searching questions. 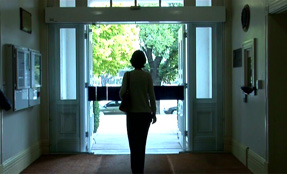 From the dramatic crescendo sequence, Nocturne returns to the woman playing Chopin at the piano. She completes the recital, packs her stuff, exits the room, walks down several corridors, approaches the sliding exit doors – the bustling world visible on the other side – and hesitates. Then, she proceeds to leave and we see her merge into the city world. The chasm between night and day, the inner world of desire and passion and the external world of commerce and profit is one that is palpable at this point in the film.

Yet the return to the woman playing Chopin, and the overall effect of book ending the film with her, makes us wonder: Was it all a haunting meditation projected from her inner eye? Was this vision of an alternative world, of ghosts that inhabit the shadows of night and haunt the day, something she dreamt up? Part of the film’s fascination is that any of this is possible. Its pensive, musical, abstract structure lends itself to being a meditation of sorts; yet the film is also clearly an attempt at reworking the vampire genre to explore haunting and contemporary philosophical ideas. Ultimately, A Nocturne remains, for me, a haunting meditation on a set of ideas that are as relevant today as ever. The question remains how do we bridge this gap between night and day, passion and profit, the individual and society? At the very least, Mousoulis suggests that in the deep oppositional world of the night and the artist we can find there some form of truth and honesty.

A Nocturne was awarded Best Film, Best Lead Female Actor and Best Editing at the 8th Melbourne Underground Film Festival. It will be screening at the 26th Brussels International Festival of Fantastic Film in late March 2008.