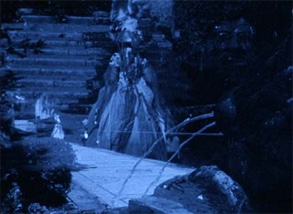 Eaux d’Artifice is arguably one of the simplest yet most perfectly realised films made by the controversial American avant-garde director Kenneth Anger – perhaps best known for Scorpio Rising (1963), his rock ‘n’ roll paean to sex, death, occult ritual and motorcycle fetishism. Like that later film, these days Eaux d’Artifice is normally shown as part of his Magick Lantern Cycle, a collection of the nine extant films that he made between 1947 and 1980.

The film follows the progress of a lady dressed in period costume as she explores the gardens of the Villa d’Este in Tivoli, some thirty kilometres outside the Italian capital of Rome. These extraordinary sixteenth-century water gardens adorned by more than a thousand fountains and water spurts can still be visited and, despite some depressing wear and tear wrought by the passage of time, it takes only a little imagination to ignore the thronging tourists and conjure up instead the spirit of Anger’s stunning night-time reverie. Only the scale of the gardens seems less than that represented by the movie, as Anger’s crafty casting of a dwarf in the main role served to create an exaggerated sense of their magnitude.

Presenting an astonishingly beautiful play of light on bubbling and cascading water, and choreographed to the “Winter” Concerto of Vivaldi’s The Four Seasons, Eaux d’Artifice requires no knowledge of Anger’s oeuvre in order to make it a joy to watch. Yet a more sophisticated appreciation of its intent is best achieved by considering it in the context of the director’s wider preoccupations. Anger’s dedicated exploration of certain themes – ranging from the conceptual to the biographical – positions him as the consummate artist filmmaker (1).

The main thread running through Anger’s films, writings and interviews is arguably his commitment to the version of modern occultism propounded by the notorious Satanist, Aleister Crowley, whose writings and practice encompassed influences drawn from an eclectic range of earlier religions and philosophies. In his own work, Anger shows particular dedication to the figure of Lucifer as god of light and thus “patron saint of movies” (2), a dedication that finds one of its clearest expressions in Eaux d’Artifice. Anger’s own homosexuality also features frequently in his work, oblique traces of which can also be discerned here. Finally, his characteristically maverick public explanations of his films, at once flippant and serious, raise a host of alternative readings of Eaux d’Artifice which, even if taken with a recommended hearty dose of salt, undeniably enhance its spirit of wicked fun.

A sequel of sorts to his first extant film, Fireworks (1947), Eaux d’Artifice’s title is a pun on that of the earlier work, which translates into French as “feu d’artifice”. Evoking a dream and laden with symbolism, Fireworks had revolved around the figure of a dreamer played by the young Anger himself who, in the director’s own words, “goes out in the night seeking ‘a light’” (3). We find here an illustration of the “sex-magick” adopted by Anger from Crowley’s teachings. Its merging of a masochistic gay pick-up with the quest for light sees the dreamer attaining wholeness through the transcendentalism of sexual ecstasy and the concomitant communion with the spirit of Lucifer. Similarly, in Eaux d’Artifice, the protagonist will ultimately merge with the fluid light of the illuminated fountains.

Thematically central to the Magick Lantern Cycle, light is not only a pre-eminent feature of the films’ visual styles but takes on something resembling a substance of its own. It is a quality of light that Aldous Huxley has described as “preternatural”, a concept that William C. Wees explores in some detail in relation to Anger’s work (in an account that should be essential reading for all Anger devotees) (4). The close-up and slow-motion cinematography of the glistening waters of Eaux d’Artifice often achieves a level of abstraction that captivates through the patterns of pure light created. Frolicking in the darkness they open themselves up, like Rorschach “inkblot” tests, to any number of interpretations and, in so doing, both project and bestow what might be thought of as a visionary power.

The film’s pared-back structure stands in contrast to the ornateness of its imagery, centring as it does on the lady hustling past grottoes and along balustrades, gesturing with her fan as she attempts to rouse the water spirits whose leering satyr-like images are graven in the crumbling and moss-bedecked stonework. Her project also playfully evokes that of Fireworks’ dreamer: “Anger’s own happy analogy”, writes Tony Rayns, “is a middle-aged queen cruising for rough trade” (5). Indeed, the uncertain gender of the actor, variously billed as Carmillo/Carmilla Salvatorelli (but generally thought to be male), has aided the film’s passage into the ranks of “queer” cinema.

Further attributions of (homo)sexual subtext have proved irresistible to critics such as Richard Dyer, who have interpreted the spurts and showers of water as a bacchanalia of ejaculatory and urinary wantonness (6). It’s an idea that Anger has been happy to encourage. His account of Cardinal d’Este describes “a sexual pervert… [who] liked being pissed on…. So the whole garden is actually a dirty joke.” (7) Indeed, the film was initially conceived as a longer work in four parts, of which Eaux d’Artifice represents the first and only completed portion. Later sections were reportedly planned to become increasingly explicit in their representations of the nighttime orgies the cardinal allegedly hosted (8).

However one chooses to read the film – be it as an ode to a wondrous architectural creation, a tranquil meditation on the visionary power of the harnessed elements, or complete filth – its perfect harmony of image and music remains almost unparalleled in execution and affect and is destined to linger in the mind long after the light of the projector bulb is extinguished.