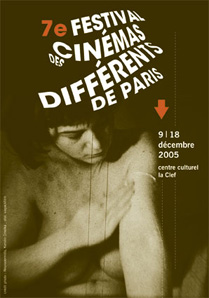 The existence all over the world, but particularly in France, of experimental cinema is due to the existence and the functioning of co-ops for independent film distribution. Le Collectif Jeune Cinéma, from which stems the Paris Festival des Cinémas Différents, was founded in 1971. Two other structures of the same type, the Paris Films Coop. and Light Cone, were founded a little later, in 1974 and 1982 respectively. The importance of gathering filmmakers, activists and critics is a major factor for the initial identity of this cinema. The recognition of the existence of an authentic avant-garde cinema has always raised numerous problems.

As it appeared in the sphere of influence of the historic avant-gardes of the 1910s and 1920s – which were essentially pictorial and literary – this cinema was divided from the very beginning of its history. It lay somewhere between the defenders of “cinéma pur”, on the one hand, and, on the other, within various different movements, the strongest of which were the Surrealists. The first of these two were mainly under the influence of Germaine Dulac’s theories, and lauded rhythmical and lyrical abstraction where story and representation were considered a secondary element.

It was necessary to invent a ‘pure cinema’ freed of any literary or theatrical residue (the script, the performance of actors). For the Surrealists, it was just a gratuitous game: cinema was the ideal instrument for the expression of dreams, and not an art form as maintained the supporters of the theorist Ricciotto Canudo and the defenders of cinéma pur. As for the Surrealists, ultimately, they did not care about purely cinematographic æsthetics.

In issue no. 921-2 of Europe, we examined the point of view of the historian François Albéra (1), a connoisseur of modern experimental cinema who questions the fact that any avant-garde project adheres to a program, and that its purpose is not to create a parallel culture but to strike the system and society head on.

Putting aside this prejudiced and inextricable point of view, we can say that “formal” cinema which was born after World War II in the United States, at first called New American Cinema, then later “underground film”, no longer qualifies as belonging to avant-garde but to experimental cinema. In not being able to go against and change the system, its adepts and practitioners developed a parallel culture which, according to periods and historic context, began to respond to or break away from the prevailing social and artistic scene, as for example in the underground film movement’s active involvement with the pop art culture of the 1960s.

As from the 1940s, the pioneer Maya Deren already believed that experimental films were not given sufficient consideration and were always held in the role of perpetual “assistant” to other modes of expression. In 1962, the filmmaker Jonas Mekas founded The Film-makers Cooperative in New York, a place where experimental filmmakers could drop off their films, which were then offered to be rented out in cultural and non-commercial circuits. Critics stemming from this group were to develop a specific history about this art form, with its currents and authors, and thus gave it autonomy. The most famous of these writers and theorists is P. Adams Sitney. (2)

The current of French experimental cinema had a lesser impact than its American cousin because of the importance of the national “Art House” scene in France, which allowed for the existence of alternative or innovative cinemas, unthinkable in the United States where the dominion of Hollywood made of this “separate development” a harsh, but very tangible, reality.

A decisive step was nevertheless attained in 1971 with the creation of the Collectif Jeune Cinéma, a co-op that at its beginning intended to promote any cinema that could not find a place in the traditional distribution network: experimental, militant or different.

The term “different” cinema was used in 1965 by the producer and distributor Anatole Dauman to name such unclassifiable short films as those of Chris Marker, Jacques Baratier, etc. From the 1970s on, it then included experimental cinema extended to new forms of narration. Almost from the beginning, different currents appeared in it, such as L’École du corps (The School of the body: Stéphane Marti, Maria Klonaris, Katerina Thomadaki, Teo Hernandez), while the critic and historian, Dominique Noguez, who advocated this informal group right from its beginning, published a series of books which gave a legitimacy to this different and experimental cinema (3).

Le Collectif Jeune Cinéma programmed, thanks to its historic president Marcel Mazé, a section of “different cinema” within the Hyères Festival from 1972 till 1983. The arrival of a right-wing municipality in this historic place of the avant-garde sounded the death knell for this event and made the pugnacious Mazé start a new festival in the same vein in 1999, this time in Paris under the intentional title De Hyères à Aujourd’hui (a sort of play on words on the town of Hyères which sounds like yesterday = of “Hyères (yesterday) and Today”), which the following year became known as Le Festival des Cinemas Différents de Paris, which still takes place at the La Clef cinema in Paris to this day; it is the only national event dedicated to this type of cinema. In 2005, the committee elected the producer and filmmaker Bernard Cerf as head of the event. Ably assisted by the team of the Collectif Jeune Cinéma and, in particular, its president Laurence Rebouillon, he chose to review during the 7th edition of the Festival (9-18 December 2005) the current state of experimental/different film.

Contrary to the previous editions, there was no call for entries. Bernard Cerf proposed a series of fifteen monographic trajectories around modern filmmakers whom he knew, or were suggested to him, and who already had an established œuvre behind them, with the exception of the novice Cyprien Nozières, who showed the promise of a future œuvre inspired by experimental films which Cerf had seen on video.

Perhaps these trajectories seem to be a little too focused on French experimental filmmakers (Pip Chodorov, Louis Dupont, Rodolphe Cobetto-Caravanes, Olivier Fouchard and Mahine Rouhi, Carole Arcega, Augustin Gimel, Jean-Paul Noguès), but it is important to note that the American Courtney Hoskins, a student of Stan Brakhage, was acknowledged for her work. She has developed a remarkable abstract poetic style and offered an innovative artistic reading of Alfred Hitchcock‘s Psycho (1960) in Psycho Shower (2001). Austrian Dietmar Brehm was also recognized for his films, which possess a disturbing power, essentially anchored in the dark zones of eros.

Other tributes and themes were held. Two sessions were dedicated to the founder of Lettrism, Isidore Isou, and two other very disappointing programs on experimental pornographic cinema. But the audience’s curiosity was fulfilled by a screening of a few programs that came directly from the 3rd European Meeting of the Independent Labs in Brussels, held a week previous to the festival.

The last day was retained as a tribute to the super 8 format in a non-stop program of dozens of films. This initiative was justified, Kodak having announced in 2005 that it was going to stop the manufacturing of the ultra-sensitive film Kodachrome 40, which allowed such recognized artists as Gérard Courant, Joseph Morder, Stéphane Marti and a whole new generation of filmmakers to express themselves through this supple and inexpensive format with such a particular texture. But it did not mean the end of super 8 film; another emulsion, with less performance it seems, was to replace it for filmmakers using super 8. 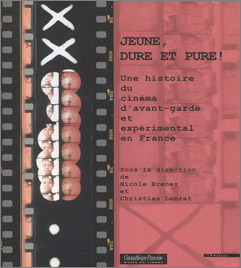 This 7th edition of the Festival des Cinémas Différents de Paris allowed the approach to some main issues as well as current questions which are shaking this scene. This echoed the article that I published in Europe, no. 853 (“Current events of the French avant-garde cinema”, May 2000), a text in which I referred to the exhibition “Jeune, dure et pure!”, the title to both the festival at the Cinémathèque Française and the published catalogue book. This 600-page book is of paramount importance in that it has recognized, for the first time, the national avant-garde and experimental cinema for its own history with its codes, its schools, its chosen æsthetics and style. (4)

As was stated earlier, it is with the establishment of the co-ops in the 1970s from whence arose the first authentically experimental filmmakers in France, as distinct from artists who made films such as Christian Boltanski, Jacques Monory and the others. In the 1990s, the creation of experimental film laboratories – called by historians like Pip Chodorov “Mouvement des laboratoires” (5) – allowed the filmmakers to have access to the means for realizing and developing films, while the technicians (Hugo Verlinde, Nicolas Rey, Carole Arcega) introduced to new members the use of the cameras, editing and direct intervention on the film strip.

This movement of establishing laboratories by people having discovered experimental films during their university studies, and who wanted to control their whole creative process without having to pass (or only occasionally) through the professional laboratories, joined and completed the movement of the co-ops, which as a result found a new wind.

From there on, numerous and similar structures agreed around a Manifesto in 2002 and obtained, among other things, in 2004, from the CNC (Centre National de la Cinématographie), the creation of a selection panel specifically for experimental projects. The first films stemming from this harvest were shown in the Festival des Cinémas Différents this year. Every facet of this cinema has had a showing in this Festival in one way or another.

Without choosing the head-on attack attitude against the system, unlike the avant-garde cinema, the experimental cinema pursues its development thanks to groups of filmmakers whose visibility increases, and whose presence nourishes and renews film culture in general.

Originally published in French in issue no. 923 of the monthly literature magazine, Europe (March 2006).