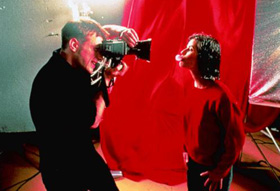 In making Red, the final part of his Three Colours trilogy, Krzysztof Kieslowski completed as near a perfect cycle of movies as late Western cinema has seen, as well as writing his own perhaps not completely unforeseen epitaph with the same irony that informed the rest of his highly self-aware oeuvre.

Red’s brilliant opening sequence establishes this theme at once, so quickly one could almost miss it. Someone punches a phone number into a keypad. The electronic code rushes along the flex to the wall and falls into the great system of optical fibres. Now we hear a mounting babble of voices gather and mix as the cables dive into the water, rush along the seabed to emerge and whiz through subterranean tunnels until… we hear an engaged signal! Bad luck or bad timing?

An old man listens in on his neighbours’ phone conversations. Down the road, in the city of Geneva, a young woman gets ready for a modelling job while across the road a young lawyer senses his lover slipping away from him. That’s the set up for Red but from these crisp snapshots emerges a rich and complex philosophical narrative of loss and, perhaps, by the end, redeeming love.

Above the little Chez Joseph café-bar a phone rings again and again. A breathless Valentine (Irène Jacob) answers. It’s her lover Michel, stuck in Britain in the rain. Outside the skies darken and Valentine hurries off to her photo shoot: there, her face is photographed again and again, in profile against a red backcloth. She is blowing a pink bubblegum balloon. Later we’ll see the finished poster play a pivotal role for the judge and for us, the audience. Meanwhile, a red four-wheel drive pulls away from opposite Chez Joseph, driven by a young man (Auguste) who lives directly across from Valentine, but won’t meet her until the film’s last, extraordinary sequence that pulls all the threads of the three movies together with a yank. The cues are all there: missed signs, signals, the warning flashes of red are everywhere.

The dominance of red (the third part of the Tricolour, symbolising brotherhood) in both art direction and photographic design has a visual intensity reminiscent of Ingmar Bergman’s Cries and Whispers (1972). Red, as Roland Barthes has observed, is a universal linguistic signifier of love and blood, life and death. Valentine is, in the end, life itself to Trintignant’s desiccated retired judge, the catalyst that can quicken even his dead soul, heal his flatlined heart, and, perhaps, offer a kind of quietus. But at first there seems only threat in their meeting: she is a tabula rasa, he seems like a tired spider crouched in the centre of his web.

If the colour (bright) red is set to stand for both danger and the possibility of passion when all else has withered, the confrontation between Valentine and the judge is also the isotopic centre of the film. The clash between experience and disappointment, youth and the potential for the inevitable suffering, that makes us fully human, is yet to come.

If White was suffused with a sense of play and Blue a cool meditation on awful and bottomless loss, where the unfinished music of the orchestral work for “a new Europe” served as a character as much as any of the actors, Red brings the themes together with a meditation on the nature of brotherhood and, yes, humanity itself.

What fully brings together the themes of the trilogy is, of course, the last scene, where the storm that has been building throughout Red sweeps into the Channel, causing a series of disasters, some linked more than is at first apparent and also, in the much debated (and often decried) climacteric, unites the key characters from Blue, White and Red in an astonishingly daring piece of narrative rule-breaking. It is a climax, however, that makes absolute emotional sense in the light of Kieslowski’s obsessions with chance, luck and destiny.

Kieslowski himself once pointed out, “we risk causing harm to the people we film. That’s when we feel the need to make fiction features.” (1)

Certainly the relationship between a burnt out judge with a penchant for electronic spying and an innocent, almost vacuous, young woman seems the stuff of the traditional – and very European – literary novel. But what is touched on here, as well as the flowing Steadicam and Technocrane stylistics (used here for almost the first time in France by the ever experimenting Kieslowski), make this film seem as if we are eavesdropping on fully lived lives.

The decision, for example, to film the difficult key exterior scenes in an actual Geneva street (apart from causing a budget blow out, according to the trilogy’s executive producer Marin Karmitz) also gives a sense of hyper-reality to the whole movie: we are carried along with the story but we are also voyeurs – as is, it turns out, almost every character in the film.

In Red, subtext is all. Not just through the insistent use of colour codes but the interlocking, barely glimpsed way in which all the characters are linked either in the filmic present or the imaginary possible futures that Kieslowski sketches. All contribute to a sense of fate rumbling along beneath the cinematic story’s surface. Here is certainly a film that allows very little space for the play of free-will, while also hinting that destiny is a game player too. This also makes Red one of those rich, playful films that demand a second – or many – later viewings.

This element of the accidental is a recurrent theme in all of Kieslowski’s features: remember the endless near misses in The Double Life of Veronique (1991)? Valentine carefully, obsessively, drops a coin into a newsstand slot machine every morning. Two lovers decide what to do for the night by simply flipping a coin. The judge tells Valentine: “Perhaps you’re the woman I never met”.

Perhaps. That hopeful yet also melancholy proviso, like just about every action, possibility and consequence in the trilogy, is the result of blind chance. As the owner of Chez Joseph comments to Valentine when she finally hits the jackpot on the slot machine: “That’s a bad sign!”

It was. Shortly after finishing this majestic film, Kieslowski underwent open-heart surgery and never woke up. Bad luck? Well, the whole movie is about that, isn’t it?