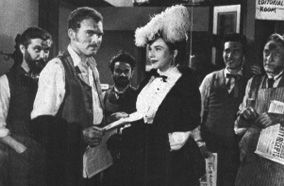 Sam Fuller’s Park Row opens with a bold, text dominated sequence, an approach that subsequently became a key feature of the director’s full-frontal visual style. Against a continuously scrolling list of all extant 1,722 late 19th century America newspapers, emphatic headlines announce the “stars” of the story – the newspapers themselves. This early work from a filmmaker described as a “B” movie specialist and “controversial figure in American cinema” (1), is fascinating for its incipient expression both of Fuller’s singular stylistic approach and his enduring interest in journalism.

A modestly budgeted, self-financed project (Fuller lost virtually his entire $200,000 investment when the film failed commercially), the writer/director’s fifth feature tackled a subject close to his heart. Shaped by his confronting entrée into journalism (as one of the youngest crime reporters in the US, he recalls regularly covering “strikes, executions and that kind of thing” [2]), Fuller’s subsequent thematic and stylistic choices have often been read as fundamentally informed by these earlier journalistic experiences (3).

In the opening sequence, a portentous voiceover describes New York’s late 19th century Park Row as the “most famous newspaper street in the world where giants of journalism mix blood and ink”. This typically vivid but effective piece of Fuller hyperbole sets the scene for a newspaper war pitting Phineas Mitchell (Gene Evans), the principled editor of newly minted daily broadsheet The Globe, against ruthless tabloid dynasty proprietor Charity Hackett (Mary Welch) (4). There is a simmering (though not particularly convincingly delineated) romantic attraction between the two, but the fierce rivalry is more significant in providing a dramatic contrast in publishing ethos from which to then argue the case for the freedom of the press.

Park Row establishes the director’s penchant for tackling a range of social and political issues in an unashamedly declamatory style. Eschewing the label of political filmmaker, (“Politics doesn’t interest me… I’m just interested in character” [5]) Fuller nevertheless acknowledged his unapologetically pedagogical use of the medium:

Every film must have a message. Maybe I’m too didactic. If so, too bad. That’s just the way I write. Even if people don’t agree with me, I like to make them think a bit. I’m not what you would strictly call an educator, but all the same, I think the cinema must be used in this way… (6)

In Park Row, Fuller’s pithy and prescient script explores a series of ethical issues including trial by media, chequebook journalism, censorship, industrial sabotage and corporate corruption, all issues which arguably resonate as powerfully now as they did more than a century ago. Many minor characters are given crucial lines addressing these dilemmas, but Fuller reserves his stump speeches and most forceful statements for publisher/editor Mitchell. Extolling the virtues of, amongst others, Benjamin Franklin and Horace Greeley (literally represented as towering figures in publishing history through repeated low angle shots of their respective Park Row statues), Mitchell delivers the bulk of Fuller’s blunt but passionate discourse on what defines the ethics of a genuine “newspaper man”. It is a telling, even courageous affirmation of journalistic integrity given that in the year of the film’s release, American freedom of expression was increasingly threatened in the wake of the virulent McCarthyist anti-Communist campaign.

While many of the films in Fuller’s six decade-long career incorporate overt visual and verbal references to newspapers (including numerous homages to the fictitious Globe), only Park Row and Shock Corridor (1963) explicitly address issues of journalistic veracity. And where the latter involves an undercover journalist and takes place primarily in a psychiatric institution, one of Park Row’s many pleasures is Fuller’s stirring evocation of the publishing milieu, and the minutiae of a daily newspaper production cycle.

The sheer hard work involved in producing a daily edition is depicted with dynamic, ink-stained detail. The press roars as it spews out copy, typesetters, print boys and editors work feverishly in the frenetic rush to deadline, and the rituals and colloquialisms of the newspaper business – the “printer’s devil” and his “hellbox” – are laid bare. Incorporating key developments in publishing history (the invention of the Linotype machine, the move to newsstand sales) and references to specific 19th century events (Steve Brodie’s alleged jump from the Brooklyn Bridge, the campaign to publicly fund the base of the Statue of Liberty) enhances the authentic feel of Fuller’s heartfelt paean to the publishing world.

Given his modest budget, Fuller limits most of the action in Park Row to two contrasting locations – The Globe’s cramped offices and the expansive space of the surrounding streets. The strikingly lit interiors of the former are beautifully shot by John L. Russell, whose inspired cinematography distinguished many other films including Frank Borzage’s Moonrise (1948), Orson Welles’ Macbeth (1948) and later, Alfred Hitchcock’s Pyscho (1960). Equally distinctively, Russell’s fluid tracking shots repeatedly measure the three atmospheric blocks of Park Row, frequently following the figure of Mitchell as he wages love and newspaper war against Hackett. Fuller’s fondness for lengthy takes and elaborate tracking shots becomes one of the trademark features of his mature visual style. He nominated sequences in Park Row (the saloon bar brawl that spills out into the street) and 1957’s Forty Guns (incorporating what Fuller claimed was the “longest dolly shot in Hollywood” history [7]) as exemplary of his bravura approach to camerawork.

If journalism provided an early, formative experience, Fuller’s WWII military service constituted the other definitive influence on his personal and professional outlook. The director’s muscular brand of filmmaking often involved scenes of explicit violence (Pickup on South Street, 1953, Underworld USA, 1961, The Naked Kiss, 1964), and his oeuvre has consequently been read through the prism of these brutalising journalistic and military endeavours. Fuller himself interpreted the medium in a characteristically combative way: “… film is like a battleground: love, hate, action, violence, death. In one word, emotion.” (8)

While there are occasional moments of violence (the aforementioned saloon bar brawl and a typically excessive dispute involving Benjamin Franklin’s statue), the crimes committed in Park Row are of a moral rather than physical kind. In this early but important Fuller work, the battle lines are drawn over print and principles, and defeat is signalled by Hackett’s personal and professional capitulation to a “real newspaper man”.

The decade or so following the release of Park Row was the most productive of Fuller’s career. Refining his stylistic and thematic preoccupations in a series of visually distinctive, uncompromisingly tough films (including Pickup on South Street, Forty Guns, Underworld USA, Shock Corridor and The Naked Kiss), Fuller’s directorial perspective seems to cohere around an increasingly bleak worldview. In this respect, Park Row’s essential optimism makes it something of an anomaly, yet this forcefully told, intensely personal narrative (“the story of my heart” [9]), is equally significant for the way in which it foreshadows how Fuller was to become a “vital force in American cinema” (10).