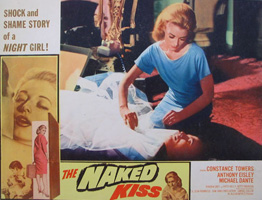 Sam Fuller has always been difficult to deal with. His films, in turns tough, hysterical and maudlin, don’t allow passive viewing. Fuller demands engagement and The Naked Kiss is one of his strongest works because our engagement is rewarded with a unique and thorough treatment of a very good idea. Fuller’s background as a journalist and pulp fiction writer is clearly evident, as is his awareness of the sensibilities of European cinema.

The Naked Kiss was not very commercially successful at the time of its release. The depiction of violence, pedophilia and prostitution was too shocking for an audience largely weaned on sanitised entertainment (1). The heroine, Kelly (Constance Towers), is a prostitute who tries to escape a life of exploitation and drudgery only to find a much more insidious form of corruption in respectable society. That hypocrisy can lurk behind even the most venerable of institutions is hardly a new idea, but Fuller provides a new take on it by making us complicit in the violence needed to uncover the truth. The opening scene has Kelly viciously beating her drunken pimp to retrieve money he owes her. During the beating Kelly’s wig is torn off to reveal her baldness. After she has retrieved her money Kelly reaffixes her wig in front of a mirror, through which we view her as the opening titles roll. Here she is assuring herself, and us, that she has “only got what’s coming to her” and that she can leave proud and justified. It is a bitter assurance which is reprised at the end of the film.

Kelly eventually relocates to Grantville, an upright town whose contradictions are immediately apparent in the local cop, Griff (Anthony Eisley). Griff is happy to be Kelly’s client as long as she plies her trade out of town. He even offers her an entrée to a brothel “over the river”. When Kelly gets a job at the local home for disabled children Griff tries to talk her into leaving. Griff can talk the bold but vapid argot of the streets, a language Kelly understands intuitively and Fuller obviously enjoys writing. When Griff confronts Kelly and talks nonsensically about her body as a passport she can’t hide, Kelly agrees with him. Griff is the voice of a paternalistic authority that sorts out “social problems” away from the public eye. He is ultimately the one who Kelly has to convince of her integrity, even if his own integrity is hardly intact.

The Naked Kiss has the trademark Fullerisms, including plot holes you could fall into, chunks of exposition delivered as dialogue (try that in a screenwriting class and see how far you get), heavy-handed metonymy and a penchant for delivering key points as visual “headlines”. Fuller’s recurring motifs are obvious and yet rather than being corny there is something strangely satisfying about them. This is a filmmaker who is in control. The damnably infectious song, “Bluebird of Happiness” is cloying in its first incarnation but exquisite the second time around when used to great ironic effect. The repeated refrains of “Moonlight Sonata” rise above the level of cultural cliché as they symbolise Kelly’s efforts to better herself and help cement her relationship with the town’s leading citizen, Grant (Michael Dante).

What is most striking in The Naked Kiss is a series of surreal scenes where the characters almost appear to step into another film altogether. Kelly exhorts the children in the home to pretend they can run and there’s a dissolve to a misty park into which they all gradually run as they join the fantasy. On cutting back to the home the children are in ecstatic raptures as if they had actually been running. This is mirrored when Grant shows Kelly silent 16mm footage of his trip to Venice and the voice of a gondolier singing fades in. Grant says if you pretend hard enough you can be there and Kelly visualises herself and Grant on cushions in a gondola, but it looks like a stylised set that in no way matches the footage (it’s more like something out of Godard’s Le Mépris/Contempt, 1963). Finally the most dizzying example is where Kelly is alone and tipsy, trying to decide whether or not to accept Grant’s marriage proposal. Grant’s voice is heard as a voiceover and Kelly talks to herself aloud. Kelly’s voice is then heard as a voiceover and she replies aloud, having a bizarre conversation with herself (“That makes me a woman of two worlds, which isn’t good… or is it?”). These sequences are all hopeful, joyous reveries, however unreal. They mark a shift from earlier films like Shock Corridor (1963), where the fantasy scenes depicting a feverish slide into insanity are more integral to the story.

Fuller is self-referential at many levels in The Naked Kiss. Kelly walks past a cinema in the town which is playing Shock Corridor. Images and associations from earlier films are repeated and embellished. There is a scene in Underworld U.S.A. where Tolly’s surrogate mother is shown with a seamstress’ model and revealed to be unable to have children. In The Naked Kiss a similar connection is made with the dressmaking model of the “town virgin” Miss Josephine, a seamstress from whom Kelly rents a room. This time, however, the model is given an identity, “Charlie”, and becomes a character in itself.

Beyond the frenetic violence, giddy fantasy and tough talk of The Naked Kiss there is also a complex and subtle visual lyricism. After Kelly’s first encounter with Griff she stands under the venetian blinds that divide his bedroom from the living area, illustrating the choice she has to make between confinement and freedom. This dichotomy between private and public is played on throughout the film. Many of the interiors in the film are made sinister by weird angles and stark, expressionistic lighting, in contrast to the plain, open outdoor shots. This schema reaches its apogee when Kelly visits Grant to show him her wedding dress. On the way to Grant’s house Kelly skips past kids playing on the footpath; the scene is sun drenched and radiant. But once Kelly enters the house she is in a mausoleum, eerie and foreboding. The scene finishes with a montage of still shots within the house that poignantly present the culture to which Kelly aspires as both beautiful and hollow. This montage is a succinct and affecting projection of Fuller’s acknowledgement of, and ambivalence to, European tradition. It is also perhaps an indication of the substance of his great influence on filmmakers ranging from Godard to Tarantino. Fuller could condemn and praise at the same time. He could make violence virtuous and charity odious. His films live and breathe contradiction and leave us breathless.