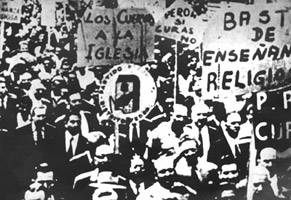 The title of this three-part agitprop documentary comes from a quote Che Guevara used to open what was to become his last public statement, the “Message to the Tricontinental”, in 1967: “It’s the hour of the furnaces and only the light shall be seen”. The author of the quote is José Martí, Cuba’s nineteenth century national hero. This double reference, to a revolutionary who died fighting Spanish colonialism, and to a revolutionary who had just died fighting neo-colonialism, cues the viewer to think of the parallelisms between contemporary liberation struggles and Latin American wars of independence in the nineteenth century; namely, a voluntarism and a nationalist anti-imperialism that effectively trumped other epistemological categories. In this regard, the film’s strong bias against validating questions of power that fall outside the realm of political economy is a reflection of its times. At the same time, however, this limitation should not blind us to the film’s greatest strength: the clear articulation of a revolutionary discourse through an equally revolutionary means of representation.

Shot clandestinely between 1966 and 1968, during the initial stages of what would come to be known as Argentina’s infamous “dirty war”, the film was screened clandestinely as well, to sympathetic audiences of workers, anarchists and revolutionaries who would regularly interrupt the projection to discuss concepts and issues raised in the film. Given the limits of space, I will focus on only one of these themes, the relationship between violence and liberation, by calling attention to the central role that violence plays in the dialectical unfolding of the film’s three part narrative, a narrative where Part 1 corresponds to the thesis of the current status quo; Part 2 to a prolonged antithesis of Peronist struggle; and Part 3 to a soon-to-be-achieved synthesis. Through this dialectical structure, the film rearticulates violence not only as a Marxist would – that is, as a symptom of the changes in modes of production – but also as a Leninist and especially a Maoist would: as a tool to be actively wielded against an oppressive status quo in order to overthrow it.

Part 1 describes neo-colonial violence as having several manifestations, and after enumerating them, we are told in an intertitle that under neo-colonialism,

At this point a rapid-fire visual montage of neo-colonial violence not only in Argentina but also in Africa, Vietnam and even the United States is scored by the frivolous laughter of a woman. The juxtaposition of a visual track that bombards the viewers with images of suffering and exploited subjects, with a soundtrack of what in this context represents the shallowness of consumerist culture, effectively violates the sensibilities of viewers trained to see only commercial or auteur cinemas (or what the directors, in their manifesto “Towards a Third Cinema”, called first and second Cinemas, respectively) (1). The film then drives home the connection between exploitation and consumerism through a sequence that cuts between images culled from the world of advertising and images of cows being slaughtered in an abattoir, a direct tribute to one of the film’s ideological and artistic intertexts: Sergei Eisenstein’s Strike (1925). With spectators thus disarmed, the film issues a call for inventing a new vocabulary, a new theory, a new aesthetic, and a new spectator who by virtue of liberation is no longer a spectator but an actor in the social sphere. In effect, the film becomes what their manifesto calls a work “outside and against the System, […] a cinema of liberation: the third cinema”.

The closing sequence, with a sacrificed Che lying in state, is set up as the example of that invention, the New Man theorised by Che himself. The narrative function of this extended closing shot is to establish a visceral and tacit approval of violence against the system as the only viable act of liberation. It will be up to Part 2 to develop the necessary historical and theoretical justification for this conclusion, and to Part 3 to give more examples (besides Che’s) on how to proceed.

Part 2 concentrates on the specific case of Argentina, the idea being that the nation, identified here with the Peronists, is the most effective conduit for confronting neocolonialism. This part of the film is divided into two sub-parts. The first, “Chronicle of Peronism” (1945-1955), focuses on Peronism between 1945, when the Argentinean proletariat gained power through the figure of Perón, and 1955, when Perón was ousted by a reactionary coup. The second sub-part, “Chronicle of Resistance” (1955-1966), documents the strategies that the now-in-opposition Peronists assumed after the coup. One by one these strategies are reviewed, after which the filmmakers conclude that unions can no longer be the protagonists of history, and that it is the masses’ turn to take up the offensive. The narration continues with an overview of the increase in military interventions on the part of the US armed forces in Latin America since the Cuban Revolution and concludes by stating,

Power rests only with he who has weapons, or with he who is set on taking hold of them. The language of arms is today the most effective political language. Shouldn’t the people prepare itself for its use? Will this not mean a long and painful war? Are there other alternatives for liberation?

These were not rhetorical questions asked to an undifferentiated audience, but rather aimed at Peronists who had tried every possible means of non-violent resistance without success, and made under the full weight of the State’s repressive apparatus.

The answer to the previous questions comes in the third and final part of the film, with a clarion call for violent insurrection defined as legitimate (because it is in self-defence), and even sanctioned by Christianity, as when the filmmakers quote from a liberation theologian. Given the unequivocal nature of the film’s conclusions regarding violence and liberation, it is surprising to find that the film closes with the filmmakers themselves appealing for further discussion. However, the structural openness this ending suggests is betrayed by the film’s closed Manichaean discourse. Given this contradiction, the viewer’s best approach is to qualify his or her critique of that Manichaeism by acknowledging that, whether or not one agrees with the worldview and the actions proposed by the film, there is no denying that the questions and the issues it raises are as valid today as they were in 1968.