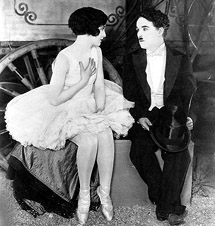 Will there ever be a greater movie star than Charlie Chaplin? Despite the almost instant global popularity conferred on today’s movie stars, it’s doubtful that any contemporary film personality will ever match the recognition of Chaplin’s “Tramp” character, who remains one of the most enduring icons in cinema history. Even most people who’ve never seen a Chaplin film can easily identify the image of the Tramp, so ingrained is the character in the public’s consciousness. In 2003, the British film magazine Sight and Sound celebrated Chaplin’s remarkable contribution to cinema history, his influence on today’s moviemakers and his continuing place in the affections of filmgoers all over the world (1). The fact that Chaplin is still a popular figure testifies to his excellent skill as a filmmaker, and his universal appeal as the struggling, put upon, shy, but quietly romantic, endearingly childlike and ultimately resilient Tramp.

At a time when film comedy seems dominated by ironic, cynical, self-referential and base humour, designed to appeal to the lowest common denominator, Chaplin’s films use terrific visual comedy to, of course, make us laugh, but also to appeal to the feelings and aspirations of the “average” person, as well as to show the daily frustrations visited upon these individuals by powerful figures of authority and oppressive institutions. In a contemporary Hollywood cinema that’s increasingly adverse to taking risks and confronting any kind of political or social questions, Chaplin’s politically and socially conscious films are just as relevant today as they ever were, taking place in a world where technology threatens to crush the spirit of the individual (Modern Times, 1936), and where fanatical leaders endanger the stability of world peace (The Great Dictator, 1940).

Made between The Gold Rush (1925) and City Lights (1931), The Circus features Chaplin’s Tramp, who inadvertently ends up working in a circus troupe while fleeing from the police – who think he’s a pickpocket – thanks to a case of mistaken identity. Although the Tramp blunders into a circus tent mid-performance and causes no end of calamities, he isn’t thrown out or turned in to the police. Instead, the boss of the ailing circus (Allan Garcia), whose acts are not popular with the circus audience, sees a winning act in the Tramp. He gets the laughs from the audience that the professional circus performers don’t, even if the laughs are generated unintentionally. The Tramp is hired to work at the circus and he soon falls in love with the stepdaughter of the circus boss (Merna Kennedy), who is admonished by her stepfather for failing to perform her act properly. Things get complicated for the Tramp with the arrival of a tightrope walker named Rex (Harry Crocker), who threatens the Tramp’s chances to win the stepdaughter’s heart.

If all this sounds overly sentimental and melodramatic, it isn’t. The Circus is both a heartfelt love story and a very funny film. Chaplin conjures up an array of comedic moments that are both ingenious and hilarious; from the Tramp’s escape from the police in a hall of mirrors funhouse, to a dazzling and dangerous tightrope act performed by the Tramp without a safety harness (but with the attention of several monkeys who are running loose in the circus and decide to join him on the tightrope!) Despite these comic moments, The Circus, like many of Chaplin’s films, is not purely an out-and-out comedy. The circus presented in the film is far from a fun and entertaining environment for the whole family. This circus is a cruel place, involving hard work that offers little reward for the performers, and which is overseen by a heartless proprietor who punishes his daughter continually and bullies the Tramp at every opportunity.

Although the film looks effortlessly executed on screen, The Circus was a troubled production. Filming began in January 1926, but the production was beset with difficulties and wasn’t finished until nearly two years later. As well as problems with the processing of the film, which left scratches on scenes that were shot early in production (mainly the climatic tightrope scenes, which had to be re-shot), there was also a fire that completely destroyed the circus tent set. On top of all this, Chaplin was going through a protracted divorce with his second wife Lita Grey, a very acrimonious public separation that halted filming in January 1927. Filming resumed in September 1927 and despite all the difficulties incurred during production, the film was eventually completed by October of that year. When The Circus was finally released in 1928 it was a commercial success and Chaplin went on to win a Special Academy Award, in recognition of his “versatility and genius in writing, acting, directing and producing” the film. Over 40 years later, Chaplin revisited the film for its 1970 reissue, composing a new score and recording an opening title song, which he sung himself.