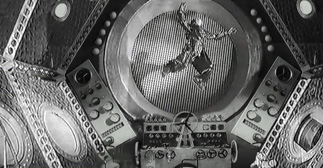 In 1930, Mosfilm (the Moscow film studio) moved from its small premises in the old city centre to a huge territory a few miles west of the famous Garden Ring that surrounds the inner districts. Getting to the studio was hard, both literally and in terms of “getting an assignment”. In his autobiography (1), Vasilij Zhuravlev, whose film Kosmicheskij rejs (Cosmic Voyage) was one of the first to be shot in the new and vast studio buildings, remembers that in order to reach the studio one had to change buses at least three times, and then walk for some distance across a hilly area. But according to Zhuravlev, who back then was an absolute greenhorn, the obstacles were worth surmounting. Not only because the studios were of such grandiosity, but also due to the staff. Young Zhuravlev was assigned to the Second Artistic-Production Unit, then supervised by the Soviet Union’s premier film director Sergej Eisenstein, who had just arrived back from his famous trip to Mexico. The story of how the two met is just one of the many legendary tales that surround Cosmic Voyage, the first “real” Soviet science fiction film, both a (silent) symphony of interplanetary travel, and a dazzling display of creativity and scientific method. At first the maestro wanted to know about the project (Zhuravlev answered: “I want to shoot a scientific fantasy for a young audience about the flight to the moon.”). Eisenstein then moved onto particular details: “But do you actually know how far is it to Venus? To Mars?” (Zhuravlev answered: “No idea.”) Eisenstein ultimately responded to his own questions and recommended a book to Zhuravlev from the Mosfilm library about the famous British astronomer James Hopwood Jeans. Zhuravlev, eager to borrow the book the next day as he had never heard of this fellow before, was nevertheless unable to obtain it, as Eisenstein, cunningly enough, had already borrowed it himself.

For more than 50 years Cosmic Voyage was largely forgotten, but back in the 1930s it was one of the greatest film productions the Soviet Union had ever invested in. And even today, when this pearl of early Soviet sci-fi is finally enjoying a worldwide rediscovery, we cannot help but acknowledge the sheer excellence of its special effects and the technical and scientific accuracy of many of its elements. Together with Yakov Protazanov’s Aelita (1924) and Aleksandr Andrievskij’s Gibel sensacii (1935, based on Karel Capeks play R.U.R.), it builds an honourable trio of early Soviet science fiction films, and just like its real counterparts, Gagarin’s space-flight on 12 April 1961 in Vostok 1 and Armstrong’s first step on the moon on 20 July 1969, Cosmic Voyage has emerged as a fusion of cultural myth and technical reality.

Conceived as early as 1930, though shot throughout 1934 and finally released in January 1936 – four months after the death of its spiritus rector, Konstantin E. Ciolkovskij (2) – Cosmic Voyage’s production was marked by numerous, often record-breaking feats. For example, it was the first film in Soviet film history (3) for which the communication on set took place via radio and microphone. The size and scope of the production are also indicated by the following: the 1000 m² of space required for the film’s many sets (e.g. “on earth”, “in the cosmos”, “on the moon”); the 11.000 ampere used to illuminate “a bright sunny day”; the 105 lighting appliances and 14 one-meter-diameter-projectors with parabolic mirrors deployed to create a “reality like appearance”; the thousands of electric bulbs on black velvet used to suggest “the cosmos”; and the several scale models built to animate the spaceship, “CCCP 1 – Iosef Stalin”, in which a Soviet team of cosmonauts (the film calls them “astronauts”) accomplishes the first trip to (and landing upon) the moon.

Compared to the complexity and technical proficiency of its production unit, which included numerous scientific advisors – above all Ciolkovskij (1857-1935), Russia’s “world class scientist […] the father of all practical attempts at space travel, the greatest single name in the history of rocketry” (4) – the film’s story, set in the near future and written by the director and Aleksandr Filimonov, and loosely based on Ciolkovskij’s science fiction novel Vne zemli (Extraterrestrial), unfolds relatively straightforwardly.

In 1946, after years of perfecting the construction of the first space rocket for the K.E. Ciolkovskij-All-Union-Institute of Interplanetary Communication (V.I.M.S.), a famous Soviet astrophysicist, Professor Pavel Ivanovich Sedykh (a former Red-army cavalier), is determined to fly to the moon. His more rational colleague and director of the experimental section of the institute they work for, Professor Karin, is shocked by this decision and wants to stop the “crazy old man”, especially since a rabbit previously sent out into the cosmos suffered a severe heart attack. He also argues that as long as a second test spaceship, with a cat on board, was not sending back any signals, it would be unsafe to fly. But, as one contemporary critic put it, nothing can stop Sedykh from completing the first “victory of socialist engineering over the secret, covert cosmic space” (5).

The voyage is staged as a dream come true for the whole of the Soviet Union and the rather obscure little model of Stalin’s big family that the spaceship’s crew represents: the grey nutty professor (his wife, fervently packing his suitcase, throws in tons of books and his valenki-felt boots); the blonde, gutsy and intelligent Marina, Karin’s assistant; and little Andryusha, the first “interplanetary fare dodger” (6), a young pioneer and hobby inventor (whose telescopic catapult will eventually save someone’s life on the moon). The trip is adventurous and, at the same time, a scientific and fictitious class in space travel. The astronauts bathe in tubs filled with a special solution in order to protect themselves from the engine’s backfire, and when they finally become weightless, they dance a dance of joy in one of the film’s most outstanding moments (not only because of the artistry of its staging – for the first time huge cranes were used to lift the bodies – but also because of a certain kind of liveliness captured in the scene which is so rare in the Stalinist cinema of the 1930s). The crew has to overcome several obstacles in space (the lack of oxygen, the loss of a radio, the crash into one of the moon’s craters because its surface proves to be so brittle), before eventually returning safely home to earth, with the cat in a basket. Saluted by millions of their fellow Soviet citizens, and a city skyline defined by the icon of socialist architecture, the “Palace of Soviets” (which, never built in reality, had been the architectural project of the early 30s), the three are celebrated as heroes who have opened the “the road to the cosmos”.

What fascinates even hardcore sci-fi freaks of today, however, is neither the plot, the actors, the pretty weird classical-symphonic soundtrack that moves smoothly over the sometimes rather static mise en scène, nor the film’s hilarious dialogue intertitles, but the ultimate accuracy with which the experimental laboratory, the huge hangar, the spaceship, its engines, its interior, the illuminators, the moon’s surface, the spacesuits, the heavy weighted boots, and all other technical details were rendered and predicted by the movie, creating an atmosphere full of utopian enthusiasm and Edisonian inventiveness (rather than an excess load of hard-core communist ideology). Thirty years later, Soviet cosmonauts who saw the film were mesmerised by the sense of realism of its weightlessness scenes. Not one review of Cosmic Voyage forgot to mention that both these characteristics, the exactness and the utopian potential, were due to Konstantin Ciolkovskij’s contribution to the film.

In his account of the making of the film, Zhuravlev commented on this cooperation in great length, somewhat awestruck by the surprisingly patient and persevering way in which the great old man not only went through all the drafts of the script but also delivered his own famous spaceship sketches and models as well as mathematical formulas (7). For Ciolkovskij, who had been dreaming about space travel all his life, “the film by the talented young Mosfilm director V.N. Zhuravlev” (8), was a last chance to prove to the world that fiction, fantasy and exact knowledge fuse when it comes to the higher mission of paving humankind’s way to the cosmos.