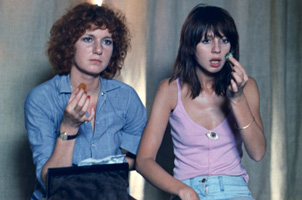 It began like this… with two actresses, a director, an ambitious project on hold and more time than money available to create a substitute. Add a scriptwriter, a “blank page with First Day, Second Day, Third Day, Fourth Day written on it” (1), an intense sense of complicity and creativity and a medley of situations culled from books read and films seen, from Alice in Wonderland to Abbott and Costello, from Henry James to Louis Feuillade. Such were the raw materials for what was to become Céline et Julie vont en bateau, Jacques Rivette’s fifth feature film and one of the iconic works of 1970s French cinema. No other film had ever been quite like it, with its interlaced stories apparently set in parallel realities, its long, half-improvised dialogues full of word-games and absurd poetic inventions, its restless subversive playfulness and its sweeping tracking shots through forgotten corners of Paris.

Jacques Rivette was, of course, one of the central figures of the nouvelle vague who had written cheeky, challenging articles for Cahiers du cinéma throughout the 1950s and launched themselves into production in the heady turn of the decade. Indeed he was something of an authority among them, for his encyclopaedic knowledge of cinema and his uncompromising opinions. But while Truffaut, Godard and Chabrol kept up an unfailing flow of feature films throughout the subsequent decade (by 1974 Truffaut had made 13, Chabrol 23 and Godard 25), the size and complexity of Rivette’s projects, their incessant experimentalism and their development through a kind of organic growth generated within the creative team, had given him the status of a critical legend along with an edgy relationship to sources of finance. His previous project, the monumental Out 1: Noli me tangere (1971), had lasted over 12 hours in its full version and been screened only once, although a “short version” (Out 1: Spectre, 1972) – a mere four hours long – had been re-edited for general release. It was thus explicable, perhaps, that producers were wary of a new project, and that Rivette’s avowed intention, when he decided to switch to what was to become Céline et Julie, was to make something light, which would appeal to a wide audience.

With a Rivette film, and particularly with the films that he made in the 70s, it is always a complex matter to locate the moment, and the source, of the creation which we see as the finished film. Out 1 had been an immense experiment with actors’ improvisation; this new project, although more restricted and carefully scripted than its predecessor, was extremely labour-intensive for the actresses, most especially for Berto and Labourier, who spent hours together elaborating their scenes. As Berto was to recall however, the final result was still a surprise: if the immediacy and spontaneity of on-set discoveries are visible in Céline and Julie’s interactions with each other, the way that their story relates to the strange drama they stumble upon in the House is carefully, thoughtfully constructed through the editing process, with a great deal of directorial control. Playful and unpredictable the film may be, but it is also of rigorous form.

Céline and Julie complement each other. They are non-identical twins whose like-mindedness creates a perfect complicity from the first scene. The film is punctuated by scenes where they replace each other, in the role of the nurse in the House but also at a rendezvous with an old flame, or on stage in a variety act. The ambiguous ending, or new beginning, suggests that their roles are interchangeable throughout: Céline equals Julie, the pursuer the pursued, and the cathartic escape from the House, definitive neither in form nor in outcome, is about to be re-played in its entirety. And yet they are not the same. Julie, the librarian, has a flat and a steady, banal job, and she furnishes her adult life with memories of her childhood, which resurface at the most unpredictable moments. Céline, the stage magician, exists in the present and invents past and future as the fancy takes her, without any ties to the world outside her imagination. Their joint enterprise in storytelling (or their gradual assumption of control over a mutual dream) springs from the creative force of that contrast: the anarchic Céline liberates Julie’s imagination; Julie offers Céline literal shelter and also a practical anchor which can concentrate her scattered creativity on this particular tale and how to tell it. Their difference is important, but most of all, it is the very fact of being two which allows the girls to exchange experiences. Alone, first Céline then Julie is absorbed in the traumatic drama of the House, and comes out shaken and confused: together, they can laugh, criticise, question, and plan developments. Since the House and its inmates are only presented in the film in the course of the “replays” which Céline and Julie organise, together, it seems possible that these visions are only visible on condition that they are shared and that they can be the subject of dialogue. Equally it is a possible dialogue between an actress and her role which allows Céline to free Julie from her cumbersome would-be fiancé, and Julie to tell Céline’s ogling audience some home truths. These two perfect complements – friends, sisters, ideal doubles – can also perform each other.

Of course performance is fundamental to Céline et Julie, as it has been to most of Rivette’s work. If – unlike all but one of his previous films – the plot does not explicitly revolve around a theatrical production, there can nonetheless be no mistake: theatre is simply no longer confined to the space of a stage. Certainly, Céline’s magical act, and Julie’s subversive version of it, take place on a stage, but there is hardly a scene between the two girls which does not contain some aspects of playful performance. They act for each other’s benefit, or sometimes for others, and indulge in carefully constructed rituals with props which are as potentially, and potently, symbolic as they are objectively banal and slightly ridiculous.

As for the scenes in the House, it is only too easy to see them as a piece of Dead Theatre (according to Peter Brook’s famous definition), where the same conventional melodrama is re-enacted day after day. In fact, although it is always a spectacle for Céline and Julie, and a scene of “performance” in that they play a role within it, the House becomes identifiably a theatre only in extremis, and precisely at the moment when the two actresses enter it together. Prior to that, as each in turn is absorbed into the role of Miss Angèle, and as the camera frames them both, side by side, frontally as if before a screen, sharing the experience after the fact, the House and its drama is projected to, or by, Céline and Julie like an imperfect but absorbing film. What they watch is always a record of a performance that has already taken place; they can only comment critically from a distance, or else be drawn helplessly into identification. When, fortified by each other’s presence and by the “eyes” they wear on their fingers, they enter the house as self-conscious performers, uncertain of their lines but capable of observing their own actions, the theatre asserts its rights. The two girls organise the space according to their needs, co-opting a hitherto unseen maids’ bedroom as a dressing-room. To the sound of unseen applause, they are able to change the course of the action, and rescue the apparently doomed child. As they indulge in (genuinely) spontaneous clowning, the other characters seem to fade. Their features become more and more waxen, their movements stiff and unreal like those of mechanical dolls – or like the actors in a faded film which can no longer be projected at the right speed. Their flesh takes on the grey tinge of figures living in a black-and-white world, their eyes register nothing but gaze into vacancy; although seen they are unseeing, like shadowy projections on a wall. The last visit to the house seems to proclaim the liberating force of theatre over a certain kind of cinema. The Classical Hollywood melodrama which Rivette had loved, and defended, as a young critic is forced to open its fourth wall and let in a self-willed audience – a modern, ironic, light-hearted audience whose greatest value is the playful freedom of childhood.

For Rivette’s theatre of life is also a place for games. Céline and Julie want nothing more than to play with the contours of the dramatic story that they have discovered – or are in the process of inventing – within the closed walls of the House. The cherished magical objects which give them access to this fantastic place are children’s toys and objects: plastic rings, sweets, old dolls stored in a toy box. The film opens with a prolonged, gleeful chase-game in which the camera itself is a mischievous participant, now following now running in front, slipping between pursuer and pursued to catch a hasty evasion, overtaking both or sweeping along beside them as they follow each other to the outer edges of the city, nondescript, slightly shabby yet somehow mysterious in the evening light. The filmmaker who has sung the praises of endless curiosity as the basis of all successful storytelling engages his audience largely through this most childlike of traits, which characters, actors and even the camera indulge on their own account through never-ending, and unpredictable, experiment. The conventions of the real world, and the narrative conventions of the family in the house, are bombarded by playful, non-committal testing – “What if we tried this… or this… or this?” And they do not resist – even if, as Hélène Frappat suggests, the final sequences – when our heroines do at last “go boating” – are peculiarly disturbing (2). The conventional ghosts are still drifting around the world into which Céline and Julie have brought Madlyn (the little girl they have rescued); the victory, if such it is, of curiosity and imagination may not be definitive. And yet, as the film ends with the promise of another round of the same game, it is hard not to wonder what else might happen. One of the best-known slogans of May 1968 called for “imagination to come to power”: six years after, Rivette’s film seems to have adopted for itself the playful, curious question – “What if it did?”