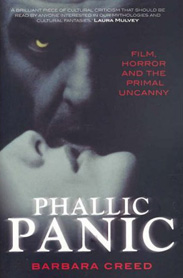 What are monsters? What role do they fulfil in modern society? These are the leading questions that Barbara Creed addresses in Phallic Panic. Cinema is the contemporary medium to tell stories about monstrous beings whose aim is to terrify and thrill a captive audience. Creed undertakes to explore the function of monsters in the modern world, especially in relation to sex and gender. In her view, the identity of the monster is inseparable from questions of power and politics. The uncanny is an aesthetic device in popular culture with “a radical potential to uncover those things that the dominant culture prefers to keep hidden” (p. 98). From Creed’s feminist perspective, dominant culture tries to conceal the other side of familiar, proper and natural masculinity that props up the symbolic order. The true horror of the male monster lies in its alignment with that which is most strange to it and that should be expelled from phallic masculinity: woman, animal and death. It moves away from masculine qualities of power, rationality and control. Thus, the male monster signifies the ruin of the male symbolic order.

For her analysis, Creed relies quite heavily on the notion of the “uncanny” from Freudian psychoanalysis. For Freud, the uncanny is related to repression: it reveals what should be hidden but comes to the surface. Whether the uncanny expresses itself through a thing, person, event or situation, it arouses dread and horror. Predictably, Freud relates the uncanny to the figure of the paternal castrator. Creed wants to remedy this exclusive focus on castration by placing greater emphasis on other sources of horror: woman, animal and death. For her, these three fundamental elements of “otherness” signify the “primal uncanny”. Unfortunately, she does not argue why monstrous figures of woman, animal and death would point to a “primal” uncanny, but it is probably because they are opposed to the male symbolic order.

Through a type of analysis that is typical of early 1990s film theory, Creed advances her main argument that the horror film questions phallic power by undermining the notion of a coherent, stable, and civilised masculinity. By collapsing boundaries between inside and outside, man and woman, man and animal, life and death, the horror film points to the possible collapse of patriarchal civilisation or, at least, to the desire for such a collapse. The horror film thus foregrounds the knowledge that civilisation is a myth. This raises an uncanny form of anxiety that she terms “phallic panic”. For Creed, the horror film discloses a fundamental anxiety about phallic masculinity in contemporary society.

Examples of such male hysteria abound in horror movies. Male monsters are figures that mutate and transform into the “other”. The male scientist who attempts to give birth to new life without the agency of woman is a running theme in Frankensteinian narratives. Creed reads the man as womb monster in such films as Metropolis (Fritz Lang, 1927), The Fly (David Cronenberg, 1986) and Dead Ringers (Cronenberg, 1988), which reveal a lack in the male who desires to assume the procreative role of woman. Typically, he fails. Dracula and the vampire – “man as menstrual monster” (p. 68) – is a more successful male monster because he can give birth by re-creating himself endlessly through the act of vampirism. The vampire’s most distinctive feature “is that he is a consummate sexual initiator” (p. 72). Creed argues that the excess of sexual perversions turns vampire films into an attack on phallic heterosexuality.

The male beast points to the thin veneer of civilisation and man’s debt to the primitive world of nature. The transformation of man into werewolf is disturbing because it suggests that the male subject is always prone to becoming animal, however civilised he may appear. Creed traces the development of the male werewolf in the last decades, suggesting that the werewolf is gradually depicted more sympathetically. Horror films like Wolf (Mike Nichols, 1994) support the idea that the urban jungle is more ferocious than the actual world of nature.

While the ghost is usually female or associated with the feminine, Creed focuses on Freddy Krueger, the monstrous male ghost of the Nightmare on Elm Street films (1). She claims that he “reveals the dysfunctional nature of the patriarchal family unit” (p. 162). Freddy is a male spectre, but his most uncanny characteristic is that he keeps the souls of his victims trapped inside his body; he is, as it were, pregnant with his victims. This makes him also a womb monster and not only the image of the bad, castrating father. The Elm Street films evoke the terror that death is inevitable to all. The figure of Jack the Ripper, as the first modern serial killer and the inspiration for the slasher film, is much more the image of male misogyny in its pure hatred of women and specifically of the female body, which he slashes to pieces.

The argument of Phallic Panic is reminiscent of Creed’s earlier book The Monstrous-Feminine (2), with a shift in emphasis to the male monster. She puts forward her theoretical point with a lot of repetitive force in readable analyses of different kinds of horror films. This makes it a highly accessible and comprehensible book for students. The essays are structured around many binary oppositions, of which the phallic male and the castrated female are the founding pair. Although Creed obviously argues that the horror film questions and even undoes this binary opposition, the book unwittingly ends up reinforcing it. Putting the emphasis on that which is repressed – woman, animal, death – ultimately leaves the underlying binary oppositions intact. It also adheres to a view of desire as lack that psychoanalytic film theory has put forward for decades, and that has recently been sidelined by Deleuzean film theories. The simplicity of bringing horror back to the primal uncanny renders clarity to the main argument of the book, but it also runs the risk of a reduction to psychoanalytic orthodoxy. These remarks do not take away from the fact that Phallic Panic illuminates pertinent, and often salacious, issues about the role of horror films in popular culture.