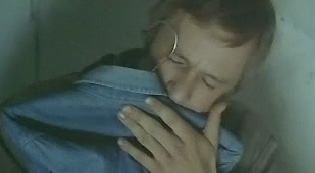 Some years it is especially hard to be a United States American in terms of the national heartbreak one is called upon to endure. One such year was 1998. In the summer, in Jasper, Texas, James Byrd, Jr., an African-American man, was chained to the back of a truck by whites and dragged to his death along a rough road. In the autumn, in Laramie, Wyoming, Matthew Shepard, a 21-year-old college student, was tied to a post in a field and beaten to death because he was gay. Wyoming, Texas: both these States coordinate the main plot elements in Brokeback Mountain (Ang Lee, 2005), a film haunted by our memories of 1998. It isn’t an entirely successful film. It is needlessly morose, lugubrious and sentimental. Most of the shots fail to attain the analytical standard of filmmaking art. A lead performance is deficient, no matter the journalistic acclaim it has bewilderingly garnered. None of this, however, prevents the film from packing an enormous wallop.

The action begins in 1963, months before the assassination of President John F. Kennedy. Two boys in their late teens or early twenties, Ennis Del Mar (Heath Ledger) and Jack Twist (Jake Gyllenhaal), take a summer job herding a Wyoming rancher’s sheep in the wilds, camping out, and falling into a homosexual experience neither of them could have anticipated. These are ‘Marlboro men’, not queers, after all, in their boots and jeans, puffing on cigarettes underneath their cowboy hats. Indeed, their first occasion of gay lovemaking – one of them suggests he was otherwise a virgin – seems to come out of the blue. The screenplay, by Larry McMurtry and Diana Ossana, from a short story by E. Annie Proulx, attempts a vague basis for the act as a reaction to previous parental strictures warning against homosexuality. It feels forced. One simply has to accept the unlikely launching of the boys’ gay partnership so that the story can get going.

Of the two, Ennis, brilliantly played by Heath Ledger, is the more conflicted. He has a sweetheart back home whom he plans to marry; what on earth is he doing with Twist? He cannot help himself, however. He and Jack become lovers, although, oppressively mindful of the times and of American bigotry, he succeeds in resisting Jack’s offer to go off and ranch together. Ennis marries his girlfriend, Alma (Michelle Williams) – the Spanish word for soul – who bears him two daughters, more or less supports him as the high school-dropout patches together odd ranching and other assorted jobs, and then divorces him, at least in part because of his continuing association with Jack. (Upon Jack’s first visit, she catches sight of her husband and Jack passionately kissing.) The boys’ cover for their sexual outings couldn’t be more macho: they’re “fishing buddies”. “Or is it hunting?” Jack’s wealthy wife, Lureen (Anne Hathaway), at one point sarcastically asks. Jack has a son. Working for his father-in-law, he is a successful salesman. (He had been a flop on the rodeo circuit.) He also lives more recklessly than Ennis, dipping south of the Texan border for paid bliss with Mexican male prostitutes. Jack ends up being bludgeoned to death for being homosexual. This occurs in the same State where President Kennedy was killed. By that time, Jack is 39 years old – ten years younger than Byrd when he was decapitated and killed.

The film is not without wit. Ennis is the orphan, but it is Jack whose name is Twist. The implication is clear: if you have to hide your sexual identity, you are an orphan in America even if your parents are alive.

The film is book-ended by two beautiful extreme long shots of a truck on the road at night – literally and symbolically, Ennis’s comings and goings. Regrettably, few of the shots in between amount to anything. Like George Clooney’s visually reprehensible Good Night, and Good Luck (2005), Lee’s film is overpopulated with close-ups, including tight close-ups, without rhyme or reason apart from the manipulative motive of Lee’s hoping to foist these characters on us, the better for us (presumably) to identify with them. But, early on, the gorgeous shots of sheep, with the boys herding the sheep, at least subliminally connects the boys with our memory of Matthew Shepard (note the last name), and a stunning shot of one of the herd ripped open by a dog, its carcass bleeding on the ground, connects with the Wyoming fate of Shepard and the Texan fates of Byrd, Twist and, possibly, JFK. (President Kennedy is never mentioned in the film – and perhaps he doesn’t need to be.) There is some good material here, then, but scarcely enough; and the Edna Ferberitic saga, as the film drags the two main characters through the years, pretty much exiles the result from serious consideration as a substantial piece of work.

Nevertheless, the Wyoming-Texas axis, with its 1998 associations, provides a springboard for interesting speculation. Unfamiliarity breeds fear, which breeds hatred and bigotry. But there is more to white hatred against blacks and straight hatred against gays in the American landscape: the Puritanical idea of taint, of contamination. The legal definition of black in the South, once upon a time, was ‘one drop of Negro blood’ – and any such reference to blood always implies contamination or its possibility. What does this definition mean in the American context? With racial mixing such as plantation practices facilitated, with slave owners seeking respite from their proper wives by bedding with the unpaid help, who were required to do their bidding, how can a member of subsequent white generations ever be certain that he – I use the masculine pronoun because this is almost entirely a white male psychological issue – is not ‘tainted’ by at least ‘one drop of Negro blood’? It is the fear of being black that helps explain pathological white hatred of blacks in the United States. Having demonised blackness, or having had blackness demonised for them, certain whites must face the terrifying prospect, in our racially mixed-up landscape, that the ‘demon’ lies within. (Incidentally, Adolf Hitler, who little resembled the Aryan model he extolled for the German state, feared he was Jewish.) It is much the same with hatred of homosexuals. If ‘one drop’ of ‘gay blood’ is all it takes to make one homosexual, using the outmoded legal definition of Negro (and why not refer to ‘gay blood’ since it is as specious and unscientific a definition as racial blood?), and if gayness has been demonised, then certain individuals may feel compelled to strike out against homosexuals – brutalize and kill them – in order to still fears about their own ‘tainted’ sexual identities. The detection of the slightest homosexual affect in themselves causes some people to hate those who hold up a mirror to them, showing them what they are terrified of being or becoming.

Brokeback Mountain does nothing to get in the way of our giving serious thought to a serious issue. Lee, who is Taiwanese-born, more often has highlighted the oppression of women in various societies; here, he has shifted his attention to another oppressed group. But he has proceeded with more sensitivity than intellectual acumen or artistic purpose. Instead, he has gone the route of pop propaganda. By imposing straight stereotypes on gay characters, he hopes to expand the comfort level of non-gays toward their gay brethren. He has made a tearjerker in a good cause – but he has made a tearjerker. In retrospect, even his wonderful Sense and Sensibility (1995) seems less indebted to him than to Jane Austen, Emma Thompson’s script, and the performances of his cast, especially those of Thompson, Kate Winslet and Alan Rickman. Even there, scenery and cinematography take precedence over purposeful mise en scène. 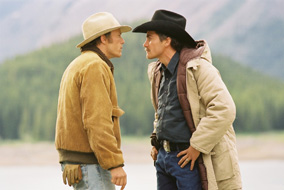 At the end of Brokeback Mountain, the implication arises that Ennis’s memory of the love he and Jack shared has made him a better father. This, of course, is possible; love is transformative. However, if we believe this as it unfolds in the film, it is less due to Lee or the script than to Ledger, whose integrity in the role of Ennis, not to mention his convincing middle-aging, is the principal feature commending this film. On the other hand, Jake Gyllenhaal is not nearly so credible as Jack. Early on, he is at his best; but he ages unconvincingly, and his performance strikes many more sentimental notes than authentic ones. (He could be acting in the television series Dallas.) Ledger strikes chords of great tenderness in his scenes with Gyllenhaal, but Gyllenhaal’s Jack never seems to love Ledger’s Ennis as much as Ennis seems to love Jack. This is ironic, given that Ennis is the character who is more conflicted about his homosexuality, and it is quite possible that this is a deliberate choice on Lee’s part and on Gyllenhaal’s. But the discrepancy between the love that Jack professes and the love that is apparent – at least to my eye – eventually defeated my understanding.

The wives are played by Michelle Williams and Anne Hathaway, and their performances are no more than adequate because, while he attempts to show the adverse impact on these women of society’s strictures against their spouses’ sexuality, Lee does so dutifully, not searchingly. He doesn’t give these two characters their full due. By way of compensation, Randy Quaid is good as the boys’ homophobic boss. Kate Mara is lovely as Ennis’s elder daughter about to marry, and Roberta Maxwell is haunting as Jack’s mother.

Let us hope that Brokeback Mountain corrals a lot of goodwill and reaches its propagandistic goals. In any case, Ledger has nicely erased his vacuous pretty-boy image and given us all a big surprise. I wonder if it is fatherhood that has prompted him to get his acting act together. Regardless, we were plain wrong. A performance like this doesn’t come from nowhere. Heath Ledger must have been (much) more talented than we realized. Let us also hope he doesn’t backslide down Brokeback Mountain.