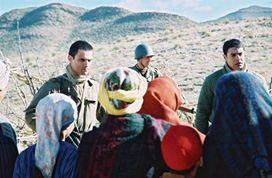 “Independent Cinema” is one of the most slippery categories in the lexicon of contemporary film criticism. The Thessaloniki International Film Festival recently explored the many antidotes to mainstream cinema available to international filmmakers in both a new sidebar entitled “Independence Days” and, less self-consciously, within other sections of the festival that were ostensibly less concerned with defining the contours of contemporary independent film.

Committed to introducing Greek audiences to an array of directors that have not received widespread local exposure, Lefteris Adamidis, curator of the “Independence Days” sidebar, detailed an ambitious agenda in the festival catalog – an aspiration to highlight “new alternatives on every level – aesthetic, narrative, political, and geographical.” As with any lofty mandate, at least a smidgen of hubris became inevitable and a certain number of the films showcased in “Independence Days” proved dismayingly lacklustre. Nevertheless, the best of Adamidis’ selections – innovative work by, among others, Andrew Bujalski, Miranda July and Jérôme Bonell – as well as a revelatory tribute to the octogenarian Japanese master, Seijun Suzuki, ably demonstrated that “independence” traverses national boundaries and is much more than a matter of non-studio financing.

Suzuki, for example – given his ten-year association with Nikkatsu Studios – would not qualify as an independent according to overly pedantic definitions. There is little doubt, however, that Suzuki’s penchant for subverting stock genres, delirious editing and over-the-top stylised acting are as far from standard Hollywood fare as Samuel Fuller’s (another maverick who maintained tenuous links wit the studio system) equally idiosyncratic low-budget films. As a case in point, Shunpuden (Story of a Prostitute) (1965), both stylistically and thematically daring, is an example of the once-derided “roman porno” genre that illustrates how Suzuki smuggled anti-Establishment motifs into a film that could easily be mistaken for exploitation fare. Story of a Prostitute takes on the still-daring topic of the “comfort women” requisitioned by the Japanese military during World War Two to serve as sexual slaves for the officer corps. An over the top melodrama aided by inventive wide-screen compositions, the impossible love affair between Harumi, a Chinese “comfort woman” and Mikami, a compassionate Japanese officer, suggests a synthesis of Tristan and Isolde and one of Fuller’s more lurid film noirs. Remarkably enough, Suzuki is still thriving as a director in his eighties and his work has become even more experimental and intriguingly excessive. His latest film, Operetta tanuki gotten (Princess Raccoon) (2005), shown out of competition earlier this year at Cannes and received enthusiastically by the youthful Thessaloniki audience, is, arguably, the most formally adventurous movie of his decidedly eccentric career. Featuring Zhang Ziyi as a nature sprite who can take either human or raccoon form, Princess Raccoon may be also be the most loopy movie musical ever made; the blend of woodcut backdrops and mock-heroic narrative twists resembles Taoism on acid.

Although hailing from a nearly antithetical cinematic planet, the young American filmmaker Andrew Bujalski (whose cult hit Funny Ha Ha [2003] and yet-to be released sophomore effort, Mutual Appreciation were bracketed together under the category “Someone to Watch” in the “Independence Days” section) makes films that are equally sui generis. While Bujalski – through no fault of his own – has been subjected to a certain amount of hype by indie cheerleaders and compared to illustrious precursors such as John Cassavetes and Jean Eustache, efforts to prematurely place him in this sort of cinematic pantheon actually do a disservice to his work. Like Funny Ha Ha, Mutual Appreciation offers an unflinching, and frequently very funny, glimpse of young people in their twenties grappling with incipient careers and amorous entanglements. Shot in starkly effective black and white, Bujalski’s comedy of embarrassment perfectly captures the charming gaucheness of intelligent – but not particularly articulate – aspiring rockers, journalists and academics. Alan (Justin Rice), the would-be rock star, is an especially nuanced creation: Rice’s supremely understated performance manages to oscillate between self-effacement and subtle self-aggrandisement with the most perfect ease. 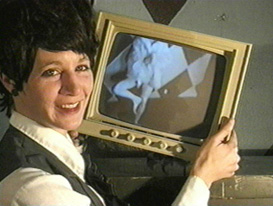 Despite a fairly wide aesthetic chasm, the work of Miranda July and Jérôme Bonnell both spoke to the necessity to maintain a delicate balance between provocation and whimsy. If, for some of us at least, July’s acclaimed feature debut, Me and You and Everyone We Know (2005), is slightly marred by it efforts to charm it audience into submission, her early video work is refreshingly oblivious to any sort of audience-friendly blandishments. The 14 minute video, The Amateurist (1998) – to cite one of the most pithy examples of July’s jabs to the viewers’ collective solar plexus – literally invites squeamishness by focusing on a crazed woman (played by July herself) who is thoroughly convinced that she can control every action of a young protégé ensnared in a kind of self-inflicted digital prison. Although Bonnell’s skepticism towards the travails of modern life is more restrained – even opaque – his latest feature, Les Yeux clairs (Pale Eyes) (2005), is a touching, but thoroughly unsentimental, portrait of an equally unstable woman (Nathalie Boutefeu) who escapes the clutches of her stultifying insensitive French middle-class family through an unlikely romance with a German woodsman who can’t speak a word of French.

If Bonnell and July mesh explorations of personal alienation with an implicit political critique, Philippe Faucon’s La Trahison (2005) was by far the most powerful example of undiluted political cinema on display at Thessaloniki’s “Independence Days”. With the advent of Alain Tasma’s Nuit noire, 17 octobre 1961 (2005) and Michael Haneke’s Caché (Hidden) (2005), French cinema is finally coming to terms with the shameful, largely repressed, legacy of the Algerian War and the colonial past. Set in 1960, Faucon’s taut drama – partially a vest pocket war film as well as an acute psychological study – revolves around a lieutenant’s gradual realisation that his Algerian-born recruits, handpicked to eviscerate the FLN, might actually be sympathetic to the “terrorist” enemy. In many respects, Faucon’s small-scale dissection of the politics of resentment is an intimate counterpart to Gillo Pontecorvo’s epic dirge for French colonialism in his classic La battaglia di Algeri (The Battle of Algiers) (1965). 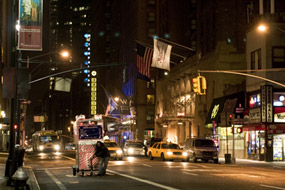 In addition to this explicit tribute to the spirit of independents, Thessaloniki also showcased noteworthy independent films in both its main competition and annual survey of Greek cinema. Ramin Bahrani’s Man Push Cart (2005), one of the most feted films in competition (winner of the Best Actor prize for Ahmad Razvi and the Audience Award for the film itself), was totally financed with the largesse of private investors and partakes of the neo-realist esthetic that has nurtured independent-minded filmmakers from Roberto Rossellini to Abbas Kiarostami. This beautifully shot and remarkably acted account of the hardships of a Pakistani push cart owner peddling donuts and coffee in mid-Manhattan would probably be unimaginable without the ballast of the neorealist tradition. The film derives its strength from the accretion of small workplace rituals and personal gestures. If the film stumbles a bit in over-sentimentalising a furtive romance between the beleaguered push cart operator and one of his more alluring customers, Man Push Cart (also screened at both Sundance and the Museum of Modern Art and Lincoln Center’s New Directors/New Films) is eventually redeemed by its earnestness and well-honed ironies.

Although it was a weak year for Greek fiction films at Thessaloniki, Hellenic cinema came through with two engaging documentaries: Spiro N. Taraviras’ Buzz (2005) (awarded the prize for Best Film by the Greek Film Critics Association) and Kalliopi Legaki’s Elias Petropoulos: A World Underground (2005). Buzz surveys the career of A.I. “Buzz” Bezzerides, the legendary (and Greek-American) screenwriter behind such film noir classics as Jules Dassin’s Thieves’ Highway (1949) and Robert Aldrich’s Kiss Me Deadly (1955). Still loquacious at the age of 97, Bezzerides evokes an era in Hollywood when at least slices of working-class experience could be transmuted into film art; Bezzerides’ scripts for both Raoul Walsh’s They Drive by Night (1940) and Thieves’ Highway reflect his personal knowledge of the trucking industry. Yet, to this day, Bezzerides continues to bemoan the tendency of studios to water down his carefully crafted scripts and the propensity of agents and moguls to shortchange him or simply rob him blind. Perhaps Bezzerides’ most astounding feat of literary legerdemain can be found in his success in transforming the Cold War misogyny of Mickey Spillaine’s Kiss Me Deadly into a critique of macho Cold War paranoia. Unfortunately, “Buzz’s” visceral leftism led to inevitable financial difficulties during the Blacklist; his association with the Hollywood left community led to him being “graylisted” during the ‘50s. He only made a brief comeback some years later as one of the chief writers for Barbara Stanwyck’s TV series, The Big Valley (1965–69).

Legaki’s film on the late Elias Petropoulos is a portrait of one of the most radical, and little known, scholars to emerge from Greece during the twentieth century. A folklorist and maverick historian, Petropoulos’ heretical scholarship earned him the contempt of the Greek government – and several stints in jail – during the dark years of the junta’s regime. Legaki’s in-depth interviews with Petropoulos reveal a full-fledged anti-authoritarian sage with a gift for provoking the guardians of Greek nationalist orthodoxy. His ruminations on the influence of the Ottoman Empire on Greek culture were anathema to believers in a chimerical national “purity”, and his research into pornography and the argot spoken by Greek gays drew enormous scorn from diehard puritans. Petropoulos’ assault on Greek propriety led him to spend many years in exile in Paris. But Legaki ably demonstrates how his transgressive excavation of aspects of Greek culture long hidden from history made him an underappreciated national treasure.

Towards the end of the festival, Thessaloniki screened a film, Fatih Akin’s Crossing the Bridge: The Sound of Istanbul (2005), which inadvertently coincided with Petropoulos’ desire for a rapprochement between Greek and Turkish culture. Employing the German musician Alexander Hacke as a de facto tour guide, the film surveys a wide swath of trends in Turkish pop and traditional music. As the credits rolled, the largely young Greek audience roared its approval. When some of the same musicians featured in the film performed later before a huge crowd, it became easy to believe that the supposed (and often-exaggerated) animosity between Turkish and Greek culture was dissolving before our eyes.