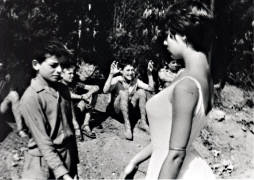 François Truffaut’s Les Mistons was the director’s first short film of any real consequence. Truffaut had completed one short narrative film before in 16mm, Une Visite (1955), which had the distinction of being shot by Jacques Rivette and edited by Alain Resnais, both then members of the critical circle at Cahiers du Cinéma. Une Visite was shot very simply in Jacques Doniol-Valcroize’s apartment, and was considered an experiment by all concerned, but all the participants in the project were dissatisfied with the results. Truffaut was subsequently working on the script that would become Les Quatre cents coups (1959), but found financing difficult to come by, and decided to go ahead with Les Mistons instead.

Shot on 35mm over the course of a month from 5 August 1957 through September of that year, Les Mistons was shot for the most part without sound, and was subsequently post-synchronised. It is, not surprisingly for Truffaut, a literary adaptation, based on a short story by Maurice Pons. Even less surprisingly, it is a film in love with youth, and devoutly heterosexual in all its visual conceits. Truffaut’s future as a romanticist seemed already mapped out even in this first project, which was shot in a decidedly leisurely manner (in the middle of shooting, the participants abruptly stopped for a ten day break, and then continued on as if nothing had happened, almost in the manner Truffaut’s hero, Jean Renoir, might work on a project).

Truffaut’s film covers one summer in the lives of a group of young boys who are transfixed by the love affair of Gérard (Gérard Blain) and Bernadette Jouve (the luminous Bernadette Lafont). The boys have a collective crush on Bernadette, and idolise her from afar, and as a result of this, they have an unreasoning jealousy of Gérard, and do everything they can to disrupt their relationship. When the couple does some innocent necking at a local cinema, “the brats” disrupt the screening with catcalls, calling attention to the young lovers. The boys follow Gérard and Bernadette into the countryside on weekends, and watch them play tennis, waiting for Bernadette to hit a ball out of bounds, so they can scramble to return it to her, as a fetishistic totem of their affection. Understandably, Gérard has little affection for the band of young hooligans, no matter how innocent they may be, and when he catches one of them spying on them, he thrashes the young boy severely. In retaliation, the children send Bernadette an impossibly ancient “adult” postcard, picturing two lovers from the 1930s reclining in an amorous pose, hoping to inspire Bernadette to doubt Gérard’s love. But, as the narrator (Michel François) announces on the soundtrack, fate replies to their act of mischief with the worst possible news; Gérard has been killed in a mountain climbing accident. The funeral follows immediately (suggested only by one shot of the exterior of a church), and Bernadette drops out of the young boys’ lives completely. Then one afternoon, as the summer is ending, the boys see Bernadette walking contemplatively down the street, lost in thought and sadness. The camera pans up to the leaves on the trees as she passes by, and the short, elegiac, gorgeous film that is Les Mistons comes to a close.

Truffaut used every possible device to make the film as sensuous as possible; it is a catalogue of trick effects, from reverse motion (in the scene in which the young boys play cops and robbers) to slow motion (the lover’s final kiss on the balcony; the shot of one of the young boys kissing the seat of Bernadette’s bicycle in innocently sexual adoration). Although photographed in black-and-white, the film bursts with the energy of summer and youth, as the trees and surrounding French countryside explode in a haze of leaves, grass, and foliage. To lighten the film’s tragic subtext, Truffaut indulges in a few typically Nouvelle Vague in-jokes; he restages Louis and Auguste Lumière’s short comedy L’Arroseur arrosé (1895) as a scene within the film (a gardener is watered with his own hose when a young boy steps on it and temporarily stops the flow of water), and recycles a joke from Luis Buñuel’s The Criminal Life of Archibaldo de la Cruz (1955) for a throwaway scene in which a passerby refuses Gérard a light. But the film, though it is slight, is at base absolutely serious, and treats Truffaut’s own adolescence in a tangential manner which would be more fully developed in Les Quatre cents coups, a far more cohesive narrative which introduced the semi-autobiographical character of Antoine Doinel to the world, in the person of the precociously talented Jean-Pierre Léaud. The “brats” are movie crazy, as Truffaut was; they are troublemakers, as the director was in his youth; and they are already attempting, in their clumsy way, to divine the mysteries of love.

Les Mistons emerges as a document of a specific time and place, grounded not so much in characters as in location. While Gérard and Bernadette would seem to be the central characters of the film, they remain figures observed at a distance, lost in a world of their devotion to each other, and to the idea of young love. The children, too, are rather interchangeable, with no one boy emerging out of the group as a central figure in either the narrative, or the viewer’s attention. Indeed, Truffaut cast the film by taking advertisements and sitting for interviews with the Parisian papers, asking for “five boys between 11 and 14” to play in the film; as in all his work with youth, Truffaut was looking for spontaneity and authenticity, rather than a polished theatrical performance. In the spirit of youth, Truffaut bestowed upon his childhood friend Robert Lachenay the grand sounding title of “Director of Production” (Truffaut had also used Lachenay’s name as a pseudonym for some of his earlier Cahiers du Cinéma reviews), valuing Lachenay’s artistic honesty over that of a hired hand. And, as we know, Lachenay acquitted himself admirably, keeping the production flowing at a smooth and steady pace. Thus, in Les Mistons Truffaut gathered about him his closest friends to make a film that spoke to the condition of his own childhood and sexual awakening, and created a work that, while short, is deeply felt, and unerringly personal. In two years’ time, Truffaut would become a celebrity “overnight” with Les Quatre cents coups. Here, we can see the young filmmaker sharpening his craft, working on many of the themes that would preoccupy him throughout his career, and succeeding admirably on all counts.