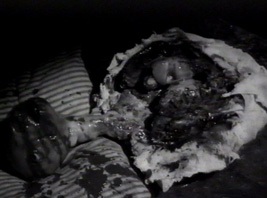 David Lynch famously described his 1977/78 feature-film debut, Eraserhead, as “a dream of dark and troubling things” (1). Generally considered one of the truly groundbreaking independent films to emerge in the horror and horror/thriller genres, Eraserhead offers a vaguely linear plot, ambiguously motivated and realised characters, and, despite an atmospheric dreamscape created via such familiar images from psychoanalysis as spewing liquids and worm-like organisms, an arguably incoherent set of messages about the interconnectedness of sexuality, identity, violence and loss.

Set in what appears to be a post-apocalyptic urban landscape resembling an industrial town well on its way to dilapidation, and inhabited sparsely by those without sufficient means to relocate even if a more desirable habitat were available to them, the story paradoxically both embraces and ignores the sterility and decay that typify the bleak, nightmarish landscape (enhanced by the film’s black-and-white stock). Henry Spencer (John Nance), occupant of a tiny grim room in a dark and decrepit building, learns from his girlfriend’s parents’ grotesque and bizarre dinner conversation that Mary (Charlotte Stewart), the girlfriend, has given birth to an offspring they believe to be Henry’s. They pressure Henry into marriage, and Mary and the swaddled offspring (a reptilian, fetal creature not unlike the chest-bursting embryo of Alien [Ridley Scott, 1979]) subsequently move into Henry’s apartment at the parents’ insistence. However, the offspring’s persistent crying compels Mary to abandon both it and Henry, who becomes sole caregiver for the infant. In what appears to be a genuinely caring and loving manner, Henry tends to the sickly baby until its escalating illness and relentless cries drive Henry to a point beyond endurance: in a moment of ambiguous violence (frustration and rage or euthanasia?), he cuts the offspring’s wraps, which, disturbingly, appear to be the only thing holding its organs intact, and then stabs its chest with the scissors, killing it. As the bleak, decaying world around Henry disintegrates – overseen by the same horribly disfigured and burn-scarred Man in the Planet (Jack Fisk) who works the symbolic levers in the film’s opening credits – a dancing Henry is received into his vision of Heaven under the auspices of the Lady in the Radiator (Laurel Near).

Embedded throughout this rather sparse linear narrative – a sketch more than a story per se – are discrete yet interconnected scenes of surreal images that may or may not be the dreams produced by Henry’s tormented subconscious. Claustrophobic camerawork encourages a strong identification with Henry on the part of the viewer – we are so limited by his perspective that his dreams effectively become our own. The dream-like imagery reveals Henry observing the Lady in the Radiator, a deformed and unnervingly childlike woman who dances on a secret stage that exists behind the radiator in Henry’s otherwise claustrophobic one-room world, where sperm-like creatures drop from an indeterminate location and squirt a milky fluid when stepped upon by the dancing and smiling woman. In another sequence, Mary’s unexpected return to Henry’s bed is interrupted by his having to physically remove parasitic giant sperm from her vagina, which he hurls against a wall. The narrative line and imagery of such dream-like sequences moments in the film’s closing sequence, uniting Henry’s delusional liberation with an almost circular return to the mechanistic fragmentation of the opening sequence (2).

While its indebtedness to such experimental surrealist films as Luis Buñuel and Salvador Dali’s Un Chien Andalou (1929) and Jean Cocteau’s Le Sang d’un poète (1930) is readily apparent, Eraserhead’s treatment of internal dream logic and the experience of dream processes offers an original perspective on the ways through which meaning is constructed and conveyed, and indeed, Lynch’s own more mainstream projects (most notably, perhaps, Blue Velvet [1986] and Twin Peaks) owe much of their mood and sense of internal ambiguity, as well as their astute manipulation of technical elements, to Eraserhead’s inchoate conflations. More than four years in the making, Lynch’s most original project was launched under the auspices of the American Film Institute’s recently established Center of Advanced Film Studies in California, where Lynch began working in early 1972 with his original 21-page script: “My original image was of a man’s head bouncing on the ground, being picked up by a boy and taken to a pencil factory” (3). With a negotiated budget of about $US10,000, producer-director-screenwriter-editor Lynch was expected to complete a 42-minute film within a period of six weeks; cast and crew replacements and budgeting issues, however, protracted the film’s schedule. Post-production was completed in April 1976, and the film’s first public screening took place approximately one year later, on March 19, 1977, at the Filmex Film Festival in Los Angeles, having been rejected by the Cannes and New York Film Festivals.

Initial response was largely polarised, as the film not only attracted enthusiasts but repelled detractors. As Jack Nance, who attended the Filmex screening, observed, “There was this stunned silence. Then the applause started…. [The audience] just stood up, and it was beautiful.” (4) The influential trade publication Variety, however, gave the film a scathing review, noting that despite its “good tech values”, the film was “a sickening bad-taste exercise”, offering “little substance or subtlety.” Other prominent reviewers – such as Pauline Kael in The New Yorker and, after its international release, Richard Combs in the Guardian – found more to laud, including the film’s mood (partly facilitated by the black-and-white photography) and dream logic, as well as its ability to provoke viewer reaction via disturbing and ambiguous imagery. The 89-minute version edited for wide-release in 1978 omits several of the original scenes, including one in which Henry observes two children digging for coins in the dirt (a snippet of which is retained in the release version), and one of Henry spying on two women tied to a bed who are approached by a man holding an electrical box (Lynch himself has described the scene as “too disturbing”). Despite rumours in 2000 – allegedly instigated by Eraserhead’s assistant cameraperson Catherine Coulson at a Twin Peaks fan festival – of a DVD Director’s Cut of the original 100-minute film, the 89-minute cut remains the sole available commercial edition, re-released solely on DVD in January 2006 in a cleaned and remastered form (5).

Although Lynch has commented that “it would be virtually impossible to deliver [Eraserhead] to an audience” nowadays because “all the truly experimental work is taking place on video in art galleries” (6), the film has nonetheless remained relevant owing to its influential and innovative treatment of familiar subjects, brought together in an absurd and surreal amalgamation that challenges viewers’ expectations and sensibilities regarding narrative and visual form. An important example of innovative and daring filmmaking, Eraserhead remains brilliant to some, indecipherable to others, and always, it seems, provocative.