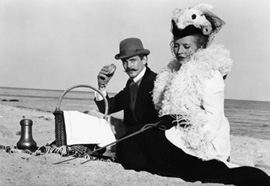 I played Major Crampas, Effi’s (Hanna Schygulla) lover in Fassbinder’s film. Hanna and I were both at odds with Fassbinder at the time of shooting, which seemed to go on forever and ever (over a year). There was never any money and even though we felt it was going to be a masterpiece, it became more and more difficult to live with Fassbinder’s mood swings which had, by this time, become quite extreme.

So both Hanna and I took some time off after shooting, only to very much miss Fassbinder soon after. Fassbinder had always been unpredictable, but I also realised, and I worked with him for ten years on 16 productions, that he was extraordinarily un-bourgeois, and full of chaos, anarchy and love. He also comprehended society, with all its misery and double standards and hypocrisies, better than anyone else we knew. And he suffered from it. He channelled this pain into a body of work that is valid to this day… and beyond. He went to great depths to create and communicate his thoughts and feelings, and he exposed himself and everyone around him. He left us at the age of 36. We love him and we miss him.

Art is about danger, not playing it safe. And he was willing to pay the price. Shortly before his death he had plans to go to Hollywood, a place where almost everyone plays it safe. I often wonder whether or not he would’ve been able to shake up this dull and conforming place, this corporate snake pit, just a little bit…