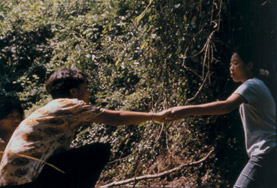 The work of certain filmmakers is so strikingly innovative and singular in style that it engenders eponymous neologisms with which to describe it. Thus have terms like Eisensteinian, Hitchcockian and Felliniesque entered the critical and even popular vernacular. That “Weerashethakulian” or – perhaps more appropriately given the customary Thai preference of using personal rather than family names – “Apichatpongesque” has not yet acquired similar currency is arguably an indictment of the entrenched Eurocentrism that continues to constrain much Anglophone film culture. Not only is Apichatpong Weeresathekul the most visionary, critically lauded filmmaker working in Southeast Asia today but, as Roger Clarke of Sight and Sound opines, he’s possibly “one of the most brilliantly original directors in the world” (1).

In a compact but strikingly diverse body of work – four features, a score of shorts and documentaries, a handful of installations, and counting – Apichatpong has developed a distinctive and remarkably mature personalised style of filmmaking that defies easy categorisation. Experimental in the most genuine sense of the term, his work is characterised by an intoxicating quality of joyous exploration and discovery that pushes the limits of received ways of making, seeing and even thinking about film. At once, surreal and mundane, primal and postmodern, actual and fantastic, his is a cinema of odd conjunctions that confounds and frustrates, as much as it dazzles and seduces. Not that Apichatpong is a hollow provocateur. Whatever stylistic unorthodoxies or textual dislocations mark their surface, his films honour the traditional fundaments of expressive cinema – visual communication, emotional engagement and viewer identification – and pitch for an absolute truthfulness that, for the spectator willing to submit to their eccentric lure, is capable of striking powerful and rewarding chords.

Apichatpong’s second feature, Blissfully Yours (Sud Sanaeha) is exemplary here. Generally regarded as his critical breakthrough, the film received widespread attention – in seemingly equal measures, fulsome and disapproving – for its sumptuous, painterly visuals and playful nonconformism. With a minimalist narrative composed of languid sequences filmed almost in real-time, a small cast of largely untrained actors, and a fractured structure that sees the opening credits run some 40 minutes into the film, Blissfully Yours is nothing if not knowing in its stylistic dissidence. Apichatpong is, after all, a filmmaker whose production company sports the wryly-renegade moniker of “Kick the Machine”. Yet, the film is also entirely sincere in its commitment to the authenticity and humanity of the characters and scenarios it carefully, even lovingly, depicts.

Min (Min Oo), a Burmese émigré, has crossed illegally into Thailand where he is harboured in a large provincial town by two women for whom he becomes an object of diverse, if abstract, desires: his young Thai girlfriend Roong (Kanokporn Tongaram) and Orn (Jenjira Jansuda), a middle-aged married woman who is paid to care for Min while Roong is at work. In an extended prologue, the film details the prosaic minutiae of the characters’ daily lives, observed with exacting detail in a sequence of durational vignettes: visiting the doctor, shopping at the market, driving in the car, working in a factory. The resulting condition of routinised anomie and numbing constraint impacts centrally on all three but no more so than on Min whose status as an unlawful alien fosters a profound estrangement, symbolically manifest as a chronic psoriasis eating away at his skin, and a generalised fear of exposure that forces him to remain silent and passive for much of the action. In a decisive shift of structural gears – something of a defining Apichatpong device – the film’s latter half sees the characters escaping the oppressive bounds of their habitual alienation by stealing to the countryside for an afternoon’s respite. Roong and Min picnic on a mountaintop and make love by a brook, while Orn has a furtive, and narratively unexplained, sexual encounter of her own, before roaming off through the woods to join the two young lovers stream side. The emotional triangulation that ensues is evocatively rendered through a series of masterfully composed visual tableaux captured by a largely static camera with minimal dialogue and little other than the organic hum of the jungle as soundtrack. Like a waking dream, the film and its characters hover on thresholds of consciousness, desires drifting as languidly as the rippling stream in which they swim or the fragments of Min’s childlike handwriting and pictures that periodically float across the surface of the image. Translated into English as Blissfully Yours, the original Thai title, Romanised as Sud Sanaeha, carries the more literal meaning of “supreme passion” or “complete intimacy” which more fully suggests the sense of urgent connection, fulfilment and belonging sought by the characters through their bucolic idyll. Though little may happen in conventional narrative terms, at the level of sensual affect, the impact is all but overwhelming with the viewer drawn steadily and inexorably into the film’s swirling emotional eddies and the characters’ desperate attempts to find happiness in the interstices of everyday life and its alienating discontents.

As emblematised in the exilic figure of Min, Blissfully Yours is a film centrally concerned with border crossings of various kinds. Indeed, the film fosters and inhabits what might best be described as a register of generalised liminality: an in-between world of ambiguous figures and tangled intersections. It is a condition of multiform fusion that extends equally to its aesthetic. Much has been made of the alleged influence on Apichatpong’s filmmaking of the work of various Euro-American avant-gardists from the French surrealists and Jean-Luc Godard to Bruce Baillie and Andy Warhol. What is less frequently noted, because possibly less evident to many Western viewers, is his even more vital allegiance to nativist Thai cultural and cinematic traditions. By his own admission, Apichatpong’s cinematic education came largely through the steady diet of home-grown melodramas, comedies and horror films he consumed as a child in provincial Thailand and it informs his work in multiple ways (2). In the case of Blissfully Yours, the pervading strangeness and preternatural energy of the jungle spring straight from the pages of classic Thai ghost stories or pee neung baht, while the film’s central love triangle is clearly indebted to lakorn, the baroque soap operas of Thai TV. Add to this a strong dose of Buddhist cosmology in the form of thematic meditations on conditional impermanence or anicca, embedded allusions to animistic folk beliefs, and a generalised tenor of emotional mindfulness or jai yeng, and it makes Blissfully Yours a work with profound Thai roots and sensibilities. Even the celebrated anti-narrative dynamics of Apichatpong’s work owe as much to the loose and often incoherent structures of low budget popular Thai film of the 60s and 70s, as to the oppositional aesthetics of Euro-American avant-gardes.

This blithe collocation of competing cultural traditions and styles imbues the film – indeed, Apichatpong’s oeuvre, at large – with a dynamic, transnational cosmopolitanism that itself might also be claimed as markedly Thai. Situated squarely at the heart of Southeast Asia, Thailand has long been traversed by shifting currents of culture and history, and has formed its unique identity accordingly. As Gridthiya Gaweewong notes, “Being Thai is all about hybridisation. Traditionally influenced mainly by Chinese and Indian cultures, Thai people are good [at] blending culture[s] and adapt[ing] them into our own version.” It is a process of indigenising bricolage that has assumed heightened impact in the current age of advanced global capitalism where Thailand stands “at a critical position… in the middle of intersection[s] between globalization and localism; tradition and contemporary culture; Buddha and cyberspace” (3). Apichatpong proves a keen and insightful observer of the heterogeneous conditions of Thai globalisation. From the army of mass-produced American cartoon figurines that Roong painstakingly colours in her daytime factory job, and that she also keeps as talismanic mementoes on her car dashboard, to the jaunty Thai-lyric samba that accompanies the opening credits, Blissfully Yours is peppered with the hybrid transnational miscellany of modern Thai life. It is the fractured background against which the characters play out their emotional dramas and from which Apichatpong gleans added grist for his idiosyncratic stylistic mill. If, as Saskia Sassen claims, “Globalization is a process that generates contradictory spaces, characterized by contestation, internal differentiation, and continuous border crossing”, Apichatpong may well be a global filmmaker of the first order (4). Moving simultaneously between the spatial and temporal orders of the local and the global, the traditional and the contemporary, Apichatpong produces an imaginatively mercurial, transnational cinema that signals exciting possibilities for the art-form as it travels into the 21st century.