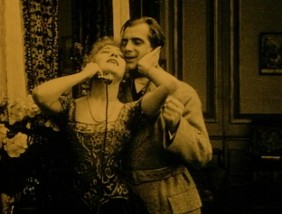 The Finnish-born film director Mauritz Stiller will probably always be better remembered for the things he lost rather than for the body of work he left behind. Of those losses, one in particular, it seems, was especially wounding. Namely, the goddess he discovered, Greta Garbo, whom he had showcased to great acclaim in Gösta Berlings Saga in 1924. Stiller came to Hollywood with the eventual lonely lady in tow on the back of that film’s international success. But his days there were numbered. Within a short period of time Stiller would be fired by MGM, only to watch the Great Garbo go on to many more successes, but with other directors (most notably George Cukor, Ernst Lubitsch and Rouben Mamoulian, after Stiller’s death). Stiller’s career had been earned in Sweden where he was considered a cinematic force to be reckoned with if not quite a great artist. It was natural that he would return there when both his fortunes and health faltered in the New World. He died in Stockholm at the age of 45, two years later in 1928), alone and for the most part forgotten. What remains of his work is largely eclipsed by Garbo’s dark shadow and his sad fate.

But Stiller’s films are worth considering in their own light. If they are rarely subtle they are surely almost always complex. Of the work I have watched the silent Erotikon is, in my view, his strongest film. There is something intense about Stiller’s best work. If he was neither as insightful as fellow Swede Victor Sjöström, with whom he is often compared, nor as prone to spectacle as Erich von Stroheim, with whom he shares certain motifs, his work is rarely predictable. He doesn’t play it safe, not even when telling a fairly conventional tale as he does in Erotikon.

Erotikon is set in a milieu very much in keeping with a certain kind of European highbrow entertainment of its time. The plushly upholstered drawing room settings are pretty much what you would find on the Parisian Boulevards or in similar theatres in Vienna or Munich in 1920, the year it was made. Its characters are gentlemen, ladies of leisure, aviators, Barons, sculptors, professors, entomologists, and long suffering housekeepers with a weakness for spirits. Add a pith helmeted explorer and an Egyptologist and you’d have a Woody Allen parody. This is the heart of Old Europe’s privileged classes distressing over affairs gone awry and new fur coats, giving cocktail parties and gossiping about each other at any opportunity. To call them the idle classes is an understatement. And yet to Stiller’s credit he makes it credible, even moving. These characters are not likable, or even very interesting, but ultimately we care.

The basic plot, such as it is, adapted from a popular play of the time, involves something like a triangle or more exactly a square, again a “Modern” theatrical trope common at the time. Irene, a bored society lady, is married to Leo, a professor whom she is not particularly interested in, and who is himself somewhat smitten with his pretty young niece, who he openly courts. Irene is also an object of interest for Preben, an insufferable sculptor, who she is perhaps even less interested in than her husband, and who happens to be his best friend. But for whatever reason, Irene pretends to adore him, and Preben pretends not to notice or mind the subterfuge. Now add to the mix Baron Felix, a dashing and handsome aviator who takes Irene for an open cockpit plane ride Red Baron style, and you get an idea of what to expect. But again not quite. It’s a lot exposition, which is odd, because there is nearly nothing to hold on to here.

What these people feel, believe and think about their adventures and perils, what they hope and long for, what they’ve lost, are questions closer to the true spirit of Erotikon, and Stiller knows how to show that. While for a critic like Peter Cowie Erotikon feels “frothy”, for me it is more melancholy. Maybe not as much so as Sommarnattens leende/Smiles of a Summer Night (Ingmar Bergman, 1955), a superior Swedish film that is often discussed in the same breath as a kind of apologia for Stiller. But it does carry a trace of sadness that gives it an unique place within a kind of film made at a specific moment in history, when cinema was still finding a way to break free from the conventions of theatre. It is not for nothing that one of the film’s most spectacular moments happens on stage in an opera house. And what a moment. For our trouble we get sheikhs, mullahs and a striptease that would make Theda Bara blush shades of scarlet. It’s nothing short of dazzling.

The film‘s ending defies everything we’ve come to expect from a “marriage comedy”. What is also missing is the moralistic tone that is a staple of the genre. To explain the ending would be to give it away and also to diminish the film itself – which is to say that there is more going on than can be explained by retelling events. Also there is a depth to the proceedings that is rigorous, especially as a means of subverting the burnt sugar on its surface. The acting is all over the place and the mise en scène is not very reliable, but there is a centre to this film that conjoins it to Stiller’s other work and that sets it apart from many other more frivolous films of its time and type. Take away the slapstick, the pratfalls, the mistaken identities, and the same elements seem sombre.

What is most satisfying about Erotikon is that everyone gets what they want in end. Which is peculiar considering that Stiller almost never did. In this way it is a film like All About Eve (Joseph L. Mankiewicz, 1950), where even the worst acts of betrayal deliver only the required and coveted results. Erotikon is not the finest film of its period and as a silent it is probably destined to be watched less and less, but it‘s more than worth the effort it requires.