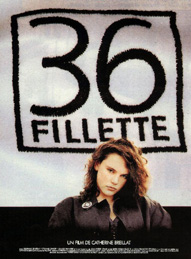 36 Fillette was Catherine Breillat’s third feature film as a director, but the first to receive wide distribution outside of France and to be favourably received by critics and audiences on the North American art house circuit. Prior to working as a director, Breillat had worked as a screenwriter or pen for hire on films as varied as David Hamilton’s Bilitis (1977), Federico Fellini’s And the Ship Sails On (1983), and Maurice Pialat’s Police (1985). Perhaps in stark reaction to the soft porn delusions of Hamilton’s work, Breillat decided to approach the subject of a young adolescent’s sexual education with a clarity and honesty rarely found in art in general, let alone film. Getting audiences to confront and deconstruct the cultural baggage they bring to sex remains at the centre of her more recent films Romance (1999), À ma soeur! (2001), Sex is Comedy (2002) and Anatomy of Hell (2004), but 36 Fillette, to this viewer, strikes the perfect balance between polemic, critique and compelling psychological study.

The film’s title refers to a little girl’s dress size and the little girl in question is 14-year-old Lili, played with chilling conviction by Delphine Zentout. Appearing to be bored beyond her years, Lili, thanks to a leather jacket and short skirt, appears to resemble the kind of nymphette Serge Gainsbourg built an entire career around. Accompanying her parents and older brother, JP, on a summer vacation in Biarritz, Lili seems to determined to punctuate her teenage ennui by getting into trouble. The trouble comes in the form of Maurice (Etienne Chicot), a middle-aged man who gives Lili and her brother a ride when they are denied entrance to a disco. Maurice is a different kind of adolescent – a middle-aged man whose chic clothes and sports car barely disguise the fact that he is a member of the “Class of 1968” gone to seed. The relationship between Lili and Maurice is developed through a series of dialogues where each character plays a part, badly. Lili tries to be the sexy coquette, while Maurice plays the world-weary teacher in the ways of love.

Both characters are deluded. Lili is simply far too young and inexperienced to know that Maurice is a walking definition of sexual bad faith, while Maurice seems to have confused narcissism with self-knowledge a long time ago. This meta-romantic duet is punctuated by fights and misunderstandings. The most memorable of these is a sequence where Lili encounters Jean-Pierre Léaud playing a classical musician at a bar. Léaud’s presence not only signifies the Nouvelle Vague, but also the fact that it was a cinema of big male egos (even the most self-critical, Godard, had a weakness for casting and manipulating young women) projecting their own confused ideas about women onto the world.

36 Fillette culminates with a hotel room seduction or “ravishment” (to use the phrase memorably delivered by Harvey Keitel in Nicolas Roeg’s Bad Timing [1980]). Lili is not destroyed by the coldness of the experience, but it is arguable that her world has shrunk a little in the process. Maurice seems likely to go on punctuating his despair with similar encounters. What lingers in the memory after viewing 36 Fillette is not only how sex is linked to a seemingly infinite series of romantic illusions, generated equally by men and women to varying degrees, but also how the struggle to “get sex” is ultimately a struggle against time. For Lili, there is still world enough and time for more (and hopefully better) sex. For Maurice, sex is probably a way to step outside time.

Breillat made few films between 36 Fillette and Romance, her next art-house breakthrough, but it is clear her view of human relations has grown even bleaker. 36 Fillette is a bleak film, but it is also limned with sufficient sadness and dry humour to make its bitter pill worth swallowing.