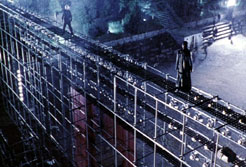 A teacher blasts an innocuous piece of chalk towards a student’s head – he turns the chalk midstream and sends it hurtling back toward the teacher.

Thus opens Volcano High, a Korean Harry Potter for manga nerds and computer game freaks, set within a carefully fenced-off and vaguely futuristic microcosm inside the crumbling buildings of a South Korean high school. Now 17 years into an ageless struggle between order and chaos known as the “Great Teachers Battle”, Volcano High is split into warring feudal camps of students and administrators – the dark forces of Jang Ryang (Kim Su-ro), leader of the Weightlifting team and known as Dark Ox of the Ox Clan, and Yoo Chae Yi or “Icy Jade” (Shin Min-ah), the Princess Leia of the school and head of the all-girl Kendo group. They all seek the lost Secret Manuscript, the holder of “truth” and the end of all chaos, which only the strongest student may possess. Jang Ryang poisons the Dean, leaving the true keeper of the manuscript in a trance, and tries to snare the reluctant hand of the ice maiden Yoo Chae Yi as his Queen; the corrupt Vice Dean, also in cahoots with Jang Ryang, imprisons the manuscript’s secret master, librarian Song Hak-kim (Kwon Sang-woo) and calls in a group of brutal disciplinarians known as the School Five to wage further chaos.

Into the schoolyard battle comes the Chosen One; the bleach-blonde Kim Kyung-Soo (Jang Hyuk), expelled from eight schools for reluctantly using his burdensome super powers, including the chalk incident featured at the start. Both Icy Jade and Song Hak-kim believe Kim Kyung-soo will lead the Forces of Light to victory and encourage him to connect with his extraordinary abilities. Song Hak-kim tries Morpheus’ (played by Laurence Fishburne in The Matrix) trick by taking Kim out of the Matrix and into his mind to help prod him along. Later, a thawing Jade stumbles on a naked Kim in the locker room shower as he begins to harness his power over the streams of water, in an incredible special-effects set piece. This ultimately leads to the film’s final, 30-minute wire-driven showdown between Kim, Jang Ryang and the School Five – trust me, you’ll need patience forged from steel and the Extra Large popcorn for this one.

The South Korean film industry has truly come into its own over the last six or seven years. No longer the poor cousin living in the shadow of the titanic Japanese and Hong Kong film factories, its films are becoming world-class with decent distribution and vocal praise from audiences and critics alike. With Volcano High, brash film pup director Kim Tae-Gyun attempts to out-do all Korean films before his, catering to a young, “hip”, internationalist, Hollywood-centric audience. He claims to have created a unique spin on martial arts fantasy films by throwing every comic book cliché into the mix; the result is a kind of post-modernist masala, a now-familiar concoction from many generations of East/West genre cross-pollination. Westerns and Samurai epics, Hong Kong wire fantasies and Japanese animation, not to mention computer games, John Woo actioners, and the Hong Kong-influenced Hollywood effects films (Dark City, 1998, and X-Men, 2000, to name a few), teen comedies and juvenile delinquent films – they’re all present and accounted for. It can be argued that too much of a good thing is bad for you, and restraint is hardly Kim Tae-Gyun’s byword. The “less is more” approach would have made a much less cluttered film. The filmmakers are just a little too keen to show you their bag of tricks.

From a technical point of view, Volcano High is an impressive achievement for a small, post-natal film culture. The film’s painstakingly composed shots took a staggering 11 months to complete, all carefully corrected into the genre’s regulation colour scheme of greys and dull blues, with the occasional splash of colour from Kim’s shock of blonde spiky hair and Jang Ryang’s red mane. The comic book feel is amped-up by enthusiastic overuse of split-screen, exaggerated angles, and fairly standard wire work, not to mention the predictably two-dimensional characters. But remember, kids, high drama is not Volcano High‘s concern. It’s a live action anime, a purely technical exercise in genre-splicing and effects-mongering; a Korean Matrix with a bleach-blonde Keanu Reeves. It’s also quite amusing, if you dig the oddball, grimacing Korean sense of humour.

The Matrix connections are signposted in huge neon arrows – in case you failed to notice – but the similarities run much deeper. The heretical Gnosticism, a shadowy parallel religion to Catholicism and Protestantism with a strong element of Eastern mysticism, and the founding belief of Freemasonry and the Knights Templar, is often trotted out in the fantasy and science-fiction genres for an alternate spiritual basis. The “order out of chaos” mythology and the Mergovinian Neo character is utilised in the Gnostic underpinnings of The Matrix series, and Volcano High mixes it with more localised mysticism: the dragon iconography, the yin-yang duality of the cardboard characters and their mastery over the earthly elements (fire, water, air). There are Teutonic overtones to the warring clans, and one character makes a deliberate reference to King Arthur – in fact, in its imagery, the Secret Manuscript is deeply reminiscent of the Holy Grail. There’s a vivid moment amidst the wreckage of the school stadium’s girders during the showdown between Kim and the head of the School Five, Mr. Ma, where both figures rise into the air Christ-like with arms outstretched, for the final confrontation between good and evil. If The Matrix series is seen by many as a Gnostic reworking of The Bible, then Volcano High should provide a field day for religious conspiracists still reeling over the one-eyed messiah from Mel Gibson’s The Passion of the Christ (2004).

I suspect, however, that Volcano High was never meant to be read as such. It’s visual popcorn, pure and simple. At 99 minutes, the film thuds along at a relentless pace, accompanied by a pounding Korean electro-metal score, and you’re not expected to catch your breath as you move from one action set-piece to the next. Tiring? Absolutely. Enjoyable? Ultimately, yes, if you forgive Kim Tae-Gyun’s endless array of dog tricks designed to impress. Just pat him on the head, and hope he has a muzzle on his next one.