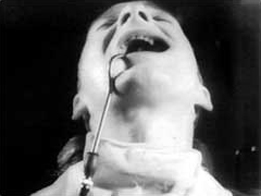 We present this little film as a good humoured comedy and hope it will be accepted in that spirit.

Both these questions (and more) are definitively answered in British short-film director Richard Massingham’s 1934 20-minute masterwork, Tell Me if it Hurts. This strange and compelling cine-gem, which is part divertissement, part black comedy, part experimental exercise, part terror-pic, part ethnographic social study, was ingeniously conceived and expertly crafted by a now-rediscovered auteur, considered by one commentator as “one of the great eccentrics of film history” (1).

Born in Kent in 1898 (“into a family of jotters and journalists” (2)), “Dicky” Massingham trained as a doctor, and ended up being appointed Senior Medical Officer at London’s Fever Hospital. Spare-time hobbyist filmmaking soon took precedence in the medical practitioner’s life, and, by his early 30s, Massingham was filming Tell Me if it Hurts, his “featurette” debut. From the outset, here was a visionary and enterprising up-and-coming talent, drawing on the resources of fellow hospital staffers, his cinematographer’s apartment (which stands in for the authentically elegant restaurant milieu of the film’s expository scenes), and, last but not least, his own personal dentist’s surgery rooms.

What automatically elevates this fledgling opus from the ordinary level of “vanity production”, however, is its singular creative and emotional perspective. This is coupled with an often startling expressionist aesthetic, rendered via a remarkably polished, constantly inventive style. While we might be tempted to suggest that “amateur” and “professional” are arbitrary oppositions and labels in the face of such transcendently Pure Cinema, let’s just declare Massingham a natural, born filmmaker.

Plot-wise, the scenario charts the simple-enough tale of a man (The Patient: Russell Waters), who, on being served a wine-soaked meal of succulent-looking chicken (by The Waiter: Peter Copley), digs in and suffers a sudden attack of toothache. This crisis prompts an emergency phone-call (to The Nurse: Freda Silcock) and an urgent visit to his local you-know-who (The Dentist: Patrick Ross). This plainly prosaic premise sets off a veritably poetic eruption of brilliantly achieved effects and formally daring flourishes.

Himself a published proponent of how standard flow and conventional continuity serve only to inhibit and constrain a film’s creative potential (3), Massingham all but bombards his central hermeneutic here with a dazzling array of consciously jarring, deliberately jolting cinematic devices. The viewer is treated to a carefully composed, richly orchestrated series of startling “coups de film”, a virtual cacophony of shock cuts, unusual angles, shifts in visual and aural scale, protracted time-stretching and often hilariously disturbing isolated motifs (supplicant hands, apprehensive leather-shoed feet, and, of course, the almost erotically submissive expanse of an open, reluctantly yielding mouth).

The steadily mounting crescendo of the movie’s virtuosic foray from physically logical perceptual subjectivity into psychologically distorted mental (or perhaps “dental”?) subjectivity reaches a painfully exquisite, quasi-orgasmic climax where real melds with surreal in an astonishing catherine-wheel of spinning abstractions, worthy of Dziga Vertov and Len Lye in their prime.

Another vital feature of this stylish non-feature is its deadpan, mostly post-synched dialogue and “noise-scape”; again, both are considered components of what the titles tell us is “A SOUND FILM BY R. MASSINGHAM”. Strauss’ famously lyrical waltz goes wonderfully, discordantly awry in the restaurant sequence while a tick-tocking clock plays loudly momentous havoc with our orally ailing Patient’s “inner” patience in the waiting room. The increasingly spooky Dentist’s pleasantries and verbal asides take on a droll, Ealing-school dark absurdist humour, culminating in his pre-drilling comment, “Oooh yes, you beat me in the last green of the Blithington Cup. One of these days you must give me the chance of getting my revenge…”. And the riffs and variations on the generic surgical query about whether or not “this will hurt” are agonisingly well exploited, with a final verbal fadeout line that more-than-tickles.

In what is a beautifully shot and lit celluloid miniature, many of the incidental cutaways prove hard-to-shake from the mind’s eye, especially some fetishistically gleaming macro-close-ups of now-dated, antique dental appliances, such as vice-like mouth-clamps, twirling drill-heads and swirling rinse-out basins. In its most handsomely thrilling sense, Tell Me if it Hurts is sheer torture, as only a Buñuel or, even more culturally pertinent, a Hitchcock might execute it. With Hitchcockian brio, Massingham also includes his own cameo appearance, playing one of the café customers.

This propensity to “star” in his observational works, à la Robert Benchley, continues as Massingham, having established a production company, Public Relationship Films, turned out more and more short subjects and instructional films throughout the 1930s, ’40s, and ’50s, sporting titles like The Five Inch Bather (1942), Read any Good Meters Lately? (1947), Jet-Propelled Germs (1948) and Handkerchief Drill (1949). Commissioned by both government agencies and the private sector, this genuine creative spirit persisted in exploring, with good humour and great imaginative flair, the monumental adventures of the mundane, the sometimes larger-than-life “ginormities” of everyday existence. Small wonder that legendary cine-archivist and co-founder of the Cinémathèque Française, Henri Langlois, once described Massingham as “the king of suspense…the greatest technician and the greatest poet of British cinema” (4). Even if Tell Me if it Hurts were the only “proof” to this perhaps overly extravagant praise, the claim could still arguably hold…