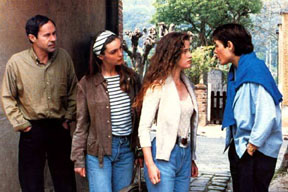 If someone could’ve witnessed, since earlier this afternoon, everything I’ve done and said, even they wouldn’t understand the meaning of the situation.

– Jeanne in A Tale of Springtime

Eric Rohmer (b. 1920) has been making films for more than 50 years, but he is known internationally for the films he has made since 1967. Shot with a 16mm camera, La Collectionneuse (1967) was the third of his “Six Moral Tales” (the first two were short films), a series that established him as one of the most distinctive voices of the French New Wave. His style has been called “lapidary” by the late Pauline Kael, and he definitely has an eye for the minutiae of things and an ear for the ironies and double-meanings of the French language (1).

The critical and commercial success of his completely unostentatious little films has enabled him – through the auspices of his own production company Les Films du Losange – to experiment with two extraordinary literary adaptations (of Heinrich von Kleist’s The Marquise of O… [1976] and Chretien de Troyes’ Perceval le Gallois [1978]) as well as launch two more series of his inimitable and elegant films in the 1980s and 1990s – the “Comedies and Proverbs” and the “Tales of the Four Seasons”.

A Tale of Springtime is, appropriately enough, the first of Rohmer’s “Tales of the Four Seasons”, and bears out its title with a portrayal of incipient love. It also reveals, somewhat playfully, how impossible it is to force love to conform to our designs. Jeanne is a high school philosophy teacher who meets Natacha at a party in Montmorency. Since neither of them knows anyone else at the party, they strike up a conversation.

Natacha lives with her father, Igor, a 40-year-old reluctant bureaucrat. But he rarely turns up – or so she assures Jeanne – since he lives with his 20-year-old girlfriend, Eve. Since Jeanne has no other preferable place to stay the night, she gives Natacha a ride home and stays at her place. Whether by accident or design (and even Rohmer’s accidents are part of his pattern), Igor comes home the following morning while Jeanne is in the shower. Complications ensue, which form the crux of Rohmer’s tale.

A subplot is introduced when Natacha tells Jeanne the story of her missing necklace, implicating both her father and his girlfriend in its disappearance. This little mystery is solved near the film’s end when Jeanne finds the necklace by accident, and Natacha’s explanation for its sudden reappearance absolves both her father and Eve. But only such solvable mysteries find such easy resolutions in Rohmer’s universe.

With his very first shot – of Jeanne walking out of the Lycee Jacques Brel – Rohmer informs us that we are going to spend some time in the company of cultivated people. But by making Jeanne a philosophy teacher, Rohmer elicits most of the film’s conflicts, along with some interesting dialogue. Jeanne tells Natacha that, instead of pedantically preaching about absolute truths, for her philosophy is the art of “thinking about thought”, that what she tries to instill in her students is the ability to “think about thinking”. Over dinner, she assures Igor and Eve that most of her students are from the working class, and yet they find it embarrassing to get a bad grade in philosophy. “It’s like saying they’re unable to think”, Jeanne insists. “We can brag about being bad at math, but not philosophy.” Yet all of Jeanne’s thinking can’t protect her from her own self-deception.

One of Rohmer’s themes in A Tale of Springtime is that nobody wants to allow anything to run its natural course – they’re always trying to force things to happen. Consequently there is a disconnection between his characters’ thoughts and their feelings. They seem too aloof to surrender to a powerful emotion. When Igor asks Jeanne if she is madly in love with her boyfriend, she answers quite directly, “How could I be? I’m not mad.”

This exchange occurs in Igor’s house when he and Jeanne are left alone by Natacha’s sudden departure with her boyfriend. Jeanne and Igor play a rather silly game that quickly turns serious – Jeanne grants Igor three wishes, to sit beside her, to hold her hand and to kiss her. It all seems so mechanical until Jeanne decides things have gone too far and insists on leaving.

Against the intensity of his dialogue, Rohmer plays out his tale in wondrous locations. The places themselves are exquisite – Parisian rooms from some displaced ancien régime converted none too carefully into functional homes (2). And they are invariably lined with overstuffed bookshelves – masterpieces of bookbinding, if nothing else. But Rohmer’s people don’t keep ideas like pets. For them, ideas are to be contested, at every opportunity.

Rohmer’s people suffer personal spasms that don’t cause ripples beyond their immediate vicinity. But within the framework Rohmer has made for them, his microcosm, every spark – the slightest word or gesture – can change the course of their lives. Rohmer’s dramatic strategy is to bring a group of disparate characters together, watch them react to one another, and have them splinter off again in different directions. He watches as fates intersect and then alter their courses accordingly – such is Rohmer’s own dialectic.