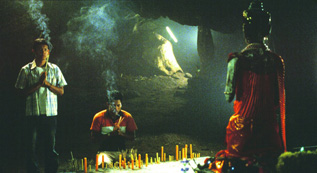 If you are shy, you might feel prompted by Tropical Malady’s credit sequence to shamefully avert your eyes. While the opening titles appear on the left side of the frame, a young man in medium close-up openly flirts with the camera and, hence, with us. According to author-director Apichatpong Weerasethakul, Tropical Malady is all about gazing and looking. And, indeed, the young Thai filmmaker’s fourth feature film repeatedly celebrates the coy flirting of young people, who coincidentally meet on a city bus or silently sit opposite each other while having dinner with family members. However, this unique, deceptively simple film is not only about gazing and looking; it actually revels in just about every kind of sensual experience.

During the movie’s first half, which leisurely chronicles the coy romance between a young soldier named Keng and a farm boy named Tong, the camera frequently foregrounds the characters’ playful fondling of each other. A scene in which Tong licks Keng’s hand, after the latter has urinated precedes a bewildering rupture within the narrative, which virtually divides the film in two halves. Then, during the film’s second half, a young soldier, who wanders off into the jungle to apparently hunt down a shape-shifting, man-eating shaman, is repeatedly seen peeling leeches and insects off his skin or rubbing his arms and face with mud. In a couple of medium long shots, the man in his camouflage suit seems to have become one with the foliage of the surrounding wilderness.

Because – apart from monkey noises, whose messages to the soldier are “translated” into subtitles – there is no dialogue in this jungle episode, every other sound stands out. And there is no better way to describe what can be heard than by quoting the US critic Dennis Lim, “the rustling, chirping, buzzing cacophony suggests a demented white-noise machine” (1).

While Tropical Malady’s heightened sensuality alone makes for a mesmerising film experience, the mysteries of the loose narrative are just as enchanting and turn this winner of the 2004 Cannes Jury Prize into a thoroughly unpretentious narrative experiment. When the two male lovers first meet, Keng is a member of a military patrol that has found a body in the jungle and has taken it to Tong’s home village. We never get to know anything about the dead nor do we get a glimpse of the deceased. What is most bewildering, though, is to see the soldiers pose for a picture cheerfully pointing at the body as if it was a trophy. When Keng and Tong later meet again and start dating, they engage in all sorts of pop culture activities, playing video games, going to the movies, listening to a pop concert. Apichatpong also intersperses naturalistic impressions of urban street life, until this seemingly aimless meandering of the plot’s first half ends with the infectious joy of a nightly motorcycle ride, accompanied by a Thai pop song on the soundtrack.

However, this first half has also included an episode which silently illustrates a folktale told by a woman, whom the lovers meet by chance. And, similarly, the second half of the movie begins with intertitles that tell another folktale. Before these intertitles appear the screen turns black for a few seconds – as if caused by a projector-breakdown – thus acting to ostentatiously divide the film in two.

This second folktale tells of a man-eating shaman, who can take on the shape of a tiger. Some simple drawings as well as a few silent scenes illustrate the story, until a soldier is seen wandering off into an enchanted forest. What chronological or causal relationship exists between the distinct halves of the movie never becomes clear, although there is obviously some relationship – if only because the soldier and the shaman (in his human incarnation) are played by the same actors who play Keng and Tong.

At the film’s outset, an intertitle tells us that, “All of us are by nature wild beasts”. Because Apichatpong repeats a shot of the soldier half-asleep – toward the end of the film and out of chronology – one might be tempted to interpret the film’s dream-like second half as the surfacing of some repressed primal nature disguised in the first. Yet, ultimately, Dennis Lim is absolutely right when he notes that, “The film’s mysteries are so cosmic that any attempt to ascribe allegory can seem puny” (2).

The elliptical narration and the first half’s seemingly detached observations of the activities of everyday life, often captured in long static takes, might remind one of Tsai Ming-liang’s work. Reviewers have also repeatedly cited Hou Hsiao-hsien as an influence, whereas the bucolic lyricism of certain sequences has earned comparisons to Jean Renoir. But ultimately, when it comes to describing Tropical Malady, any comparison seems oddly off the mark; like Apichatpong’s other work this highly original film defies categorisation.