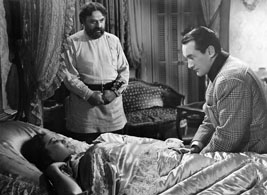 Is it still necessary to call attention to the “formal excellence and visual wit” in Douglas Sirk’s films that Andrew Sarris highlighted some 40 years ago? (1) Not that such a characterization sums up the totality of the director’s achievements or ambitions, but you would think that Sarris’ further admonition might have clinched the matter for any subsequent commentators: “Sirk requires no special rationalization, and his films require no elaborate defense. The evidence of his style is visible on the screen.” (2) In cinema, Sarris reminds us, the proof is what lies in front of your face, if you only take the time to open your eyes. And, in the case of Sirk, divest yourself of the pedantic notion that the generic parameters of melodrama demean the substance of storytelling. Tell that to Charles Dickens or Don DeLillo.

The principal object of the critical celebration of the achievements of the Danish-born, German-bred Sirk continue to lie with the decade worth of glossy subterfuge he injected into the widescreen fare he completed while attached to Universal in the 1950s. At the same time, it remains a body of work that has by and large yet to receive a second-life on DVD, at least in the United States, other than the coronation, so to speak, of All that Heaven Allows (1956) and Written on the Wind (1957) in the rightfully prestigious Criterion Collection (as well as less auspicious releases of Battle Hymn, 1957, and Imitation of Life, 1959). What has seen the light of digital resurrection are several of the uniquely odd films Sirk hatched during his first decade in the United States. While the 50s body of achievements are set in and assiduously critique the myths of American life, a good chunk of the 40s work takes place in various foreign locales – Czechoslovakia, Russia, France, and England – although the ostensible setting of all the narratives more routinely resembles that fabricated and foreign netherworld located somewhere just “inside” the backlot.

The geographic extravagance of these films – Hitler’s Madman (1943), Summer Storm (1944), A Scandal in Paris (1946) and Lured (1947) – parallels the unquestionable oddness of the source material. Just what were the producers thinking? A pageant-like depiction of the execution of a Nazi strongman taken from a polemical ballad by Edna St. Vincent Millay; a Chekhov narrative drawn forward in time to the sphere of post-revolutionary Russia; a Lubitsch-inflected period farce adapted from the memoirs of one of the primordial detective figures, the Frenchman François Eugene Vidocq; a remake of a Robert Siodmak thriller, made in France before his immigration but transposed from that setting to England: these are not the elements of a box-office bonanza. Their failure to establish a commercial foundation for Sirk’s continued residence in the United States may well have been one of the factors for his brief return to Europe in 1949.

And yet, it is the very oddness of these works that commands one’s attention, as well as the director’s canny articulation of the screen image of George Sanders in all but the first film. The Englishman had established in the public consciousness the arched brow and jaundiced demeanor that became his trademark and grew, in time, to resemble a virtual reflex, regardless of the demands of the plot at hand. Certainly, he provided one of the most quintessential manifestations of this persona in Albert Lewin’s contemporaneous adaptation of The Picture of Dorian Grey (1945). Sirk borrowed this sardonic template for the depiction of Vidocq, who embraces the practice of equivocation as a way of life and breezes through the supposedly rigid distinctions separating law and larceny. It is, however, the fissures in the facade Sanders projects that Sirk finds most interesting, and which figured elsewhere only occasionally at the time, most notably in Siodmak’s flawed but fascinating Uncle Harry (1945). Sirk spoke in later years of his affinity for “weak, interesting men”, and Sanders embodied one of the more eloquent manifestations of that type in Summer Storm.

The adaptation by Rowland Leigh, Robert Thoeren and Sirk of Chekhov’s The Shooting Party steps outside the source’s sense of chronology by embedding the events in a wrap-around construction set in post-revolutionary Russia. Now impoverished and toppled socially from his former glory, Count Volsky (Edward Everett Horton) brings a manuscript by his close friend, and former provincial judge, Fedor Petroff (Sanders) to the publisher Nadina (Anna Lee). As the story switches into retrospective mode, we discover that Petroff and Nadina were lovers and intended to marry. On Volsky’s estate, the jurist encounters the bewitching, but devastatingly vain servant Olga (Linda Darnell). An affair ensues, even though Olga less than half-heartedly agrees to a marriage with Urbenin (Hugo Haas), someone from her own station in life.

The passion shared by Volsky and Olga acquires a tinge of amour fou, which dissipates when the aristocrat recognizes that Olga’s greed for upgrading her social status outweighs any allegiance to whomever can assist her in that desired transformation. She cold-heartedly transfers her affections to Volsky when he more readily accedes to her incessant demands for adornment and admiration. Urbenin’s jealousy and physical violence do not sway Olga from her seemingly inevitable trajectory into the upper classes, but a more significant impediment arises when Petroff realizes he has been cast aside. During a hunt, he kills the woman, yet when the ensuing investigation pins the crime on Urbenin, refuses to acknowledge his own guilt.

Allowing the other man to suffer for his crimes dominates Petroff’s conscience even as the revolution turns his social status topsy-turvy. The manuscript that Volsky has brought to Nadina constitutes one last effort to regain his lost love and exonerate himself from his ethical transgressions. She, however, initially rejects his promises of emotional regeneration, yet the final outcome of the story partakes of a switch of circumstances that injects a last minute dose of cynicism into this bittersweet tale.

As the synopsis would indicate, Summer Storm bears some resemblance to Ophuls’ Letter from an Unknown Woman (1948), yet Sirk imparts a more tart tone to the proceedings. There are no wide-eyed innocents that parallel Joan Fontaine’s character; these people freely, and virtually without conscience, enjoy the luxuries of their station in life and prey upon others without compunction. Even some of Sirk’s casting works to downplay audience expectations. Horton had established himself as an icon of dithering incomprehension, yet his Count Vronsky appears to be one of his few overtly unsympathetic characterizations. At first, his refusal to focus on the management of his estates endows the aristocrat with a familiar otherworldliness, but quickly it becomes apparent that Vronsky detaches himself by choice, not by character. He just can’t be bothered by the consequences of his actions, or preference for total inertia. Sanders, on the other hand, imbues Petroff with an uncharacteristic melancholy that adeptly captures the sense of someone who knows he should control his impulses but gives in to them time and again. More often, Sanders plays a figure that offers sardonic, colourful commentary on another person’s downfall, whereas here he takes centre stage. Darnell matches him, for although her character as written possesses a one-note quality, she pounds that key with admirable dexterity.

The production of Summer Storm brought together for the second time a memorable assembly of émigré associates. Producer Nebenzal had financed a number of groundbreaking films in Europe, including Pabst’s Pandora’s Box (1928) and Lang’s M (1931). He would not fare so prestigiously in America, and this film counts as one of his few significant achievements, other than an odd noir feature, The Chase (Arthur Ripley, 1946), and Joseph Losey’s infrequently screened remake of M (1951). The cinematographer was Eugene Shuftan (Eugen Schüfftan), though union rules would not permit that attribution to appear in the credits. His illustrious career spans designing split-screen effects for Lang’s Metropolis (1926) to endowing Robert Rossen’s Lilith (1964) with its indelibly unsetting atmosphere.

Despite this noteworthy track record, the funds allotted for Summer Storm did not permit ambitions to outstrip resources. The necessary thriftiness is particularly apparent in the art direction, for while the narrative might take place in the heyday of Czarist splendour, you would not necessarily know it from the relative paucity of wretched excess. Sirk conveniently diverts attention from the accoutrements by focusing instead on his players. A Scandal in Paris, by contrast, virtually overloads the frame with well-chosen and expressive paraphernalia, though never weighing down the narrative’s effervescent lightness of being. (A director like Terry Gilliam could benefit from the example shown here of how to oversaturate but not overwhelm the senses.) One wishes that Sirk could have tackled Summer Storm in the following decade and availed himself of the opportunities available at Universal, although one cannot imagine that a producer like Ross Hunter, drawn to the works of Fannie Hurst (Imitation of Life, 1959) and Lloyd Douglas (Magnificent Obsession, 1954), would appreciate the subtleties of Chekhov. (Albert Zugsmith, on the other hand, could be more unpredictable and supported Sirk’s adaptation of William Faulkner’s Pylon as The Tarnished Angels [1958]).

Despite the under-funded conditions, Summer Storm resonates with the ripeness of the best of Sirk’s work and provides in Sanders’ Petroff one of his most sympathetic weaklings. It proves as well that, as David Thomson argues, “There are no ugly or gross shots in Sirk” (3). Whatever the conditions, he brought visual acuity and dramatic conviction to a body of work that grows more indelible with each passing year.