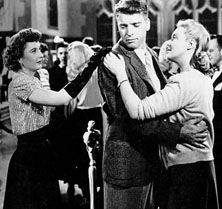 Sorry, Wrong Number (1) is a late contribution to the cycle of Gothic romance films produced throughout the 1940s (2). This cycle emerges from a culture of destabilisation surrounding World War II. Films of the Gothic romance cycle feature narratives that are palimpsests, with new patterns inscribed over established models. Based in instability, films of this cycle are inscribed with the mode of address of the woman’s film, the visual style and detective structure common to film noir and an increasing sense of dread derived from the horror film. Gothic romance films distort conventional spatio-temporal relations by presenting the heroine’s world as a kaleidoscopic collage of sights and sounds as the evil forces of the city converge on the unstable domestic space. In Sorry, Wrong Number, the separation between inside and outside dissolves and time is presented in a matrix of flashbacks that disturb chronology.

Sorry, Wrong Number incarcerates its heroine inside an oppressive domestic environment, defamiliarised by the use of “anti-traditional” lighting. The Gothic heroine and heir to the Cotterell Drug Company fortune, Leona (Barbara Stanwyck), “the cough-drop queen”, finds herself confronted with an overabundance of aural and visual signs that begin to undermine her marriage and to unravel her already precariously balanced sanity. Does her husband Henry (Burt Lancaster) love her? Is he trying to drive her insane? Is he intending to murder her to claim her life insurance? More than most films of the cycle, Sorry, Wrong Number explores the class difference that separates Leona, the heiress, and Henry, the hick from Grassville. At the height of his frustration Henry tells Leona, “You’ve got me sewed up 16 different ways for three meals a day and pocket money”.

The credit sequence introduces notions of duplicity, doubling and the darker side of modernity by opening with a distorted symbol of communication. As the sound of dialing and the consequent busy signal blends with Franz Waxman’s dramatic orchestral score, an image of a white telephone appears in the bottom left of the screen. This object is dominated by its oversized and distorted shadow looming above and commanding the space of the frame. Inspired by the German expressionist reliance on painted shadows, this static image establishes an atmosphere of claustrophobia and entrapment. Image and sound in this credit sequence set the tone for the frustrated communication and the fractured temporal framework that structures the narrative.

In image and text Sorry, Wrong Number marks Leona as reliant on an inadequate system of communication. The prelude shows text scrolling over an image of an archaic switchboard exchange, an invention designed to facilitate communication. The text reads:

In the tangled networks of a great city, the telephone is the unseen link between a million lives…
It is the servant of our common needs – the confidante of our inmost secrets…
Life and happiness wait upon its ring…
And horror…
And loneliness… and
… death!!!

In Sorry, Wrong Number the telephone is represented as an object of miscommunication and frustration, but also of revelation for Leona. Via a crossed line, Leona overhears the voice of “George” confirming details of a job. At 11.15 he will enter a house through the kitchen window, avoiding the patrolman’s 11:00 round. The job is timed to coincide with the passing of the 11.15 train, the noise intended to drown out the screams of the victim and make it look like a robbery. For the bedridden Leona, the telephone facilitates the uncanny revelation that the murder planned is her own. Leona draws this dreadful conclusion from the snippets of information provided during her interrupted, impulsive telephone conversations with Henry’s secretary, her old friend Sally Hunt (Ann Richards), Waldo Evans (Harold Vermilyea) a biochemist who Leona learns is in collusion with Henry to embezzle money from her father’s drug company, and with her own physician (Wendell Corey) who confirms Leona’s condition as “cardiac neurotic” and suggests she doubles her dose of sedative. It is in this fracturing of information presented in a combination of “real time” and flashbacks within flashbacks, that evidence is provided of Litvak pushing the limits of Gothic narration.

One way that Gothic romance films express paranoia and question subjectivity is by fragmenting and destabilising narrative structure. These narratives are marked by an epistemological drive beset by a polyphony of voices and interruptions (3). J. P. Telotte writes,

[I]n multiplying narrators and viewpoints a film like Sorry, Wrong Number… unleashes a nightmare of potential that always haunts the noir world – the potential of ambiguity, of multiple, indeterminate meanings, and of a self that is subject to unseen, unsensed forces. (4)

Whilst the film is based on a radio play by Lucille Fletcher, Sorry, Wrong Number becomes specifically cinematic in its fragmentation of time and in its use of an autonomous camera (5). Telotte’s “unsensed forces” manifest visually through Sol Polito’s innovative cinematography.

Space in Sorry, Wrong Number unfolds with a combination of stillness and mobility. In introducing the space of Leona’s bedroom the conventional establishing shot is eschewed and replaced with close-ups of Leona, emphasising her entrapment. Camera movement is initially motivated by simple gestures like the reframing that accommodates Leona’s movement as she reaches for a cigarette. Later, the camera breaks free and becomes an autonomous, active force tracking past an array of photographs, personal effects and emphasising reflective surfaces like windows and mirrors. By maintaining the sound of Leona’s voice as an aural presence, the camera is free to wander. With an increasing sense of distraction and restlessness, the camera defies gravity as a crane shot descends the height of a grand staircase, emphasising its own virtuosity by keeping it in shot. The stillness and fluidity of the cinematography combine to trap Leona as an agoraphobe within an insecure domestic space.

Conventional resolution is sometimes difficult to achieve, particularly in a cycle that raises issues of masculine duplicity and potential violence. In comparison to an earlier Gothic romance film like Hitchcock’s Suspicion (1941), Sorry, Wrong Number follows its narrative trajectory to the logical conclusion. Suspicion was subject to an imposed ending that literally took a u-turn in attempting to erase the doubt surrounding the character of the husband. Post-war Gothic romance films are more likely to follow through on the threats posed by the husband. Within the limitations reinforced by the Hays Code, Sorry, Wrong Number finally confirms that Henry is responsible for organising Leona’s death. Although Sorry, Wrong Number avoids explicit violence, it is alarmingly fatalistic in following these doubts to their ultimate conclusion.