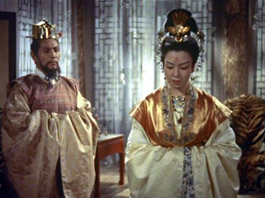 At first glance, Empress Yang Kwei Fei is Asian cinema’s answer to Lola Montes – the Max Ophuls extravaganza made that same year. An overpoweringly lush colour fantasia (half history, half Cinderella) about a young woman who rises from murky origins to snare the heart of a reigning monarch. A historical fairytale without, of course, a “happy ever after” ending. In both films, the rapid rise of our heroine throws society into chaos and open revolt. Poor Lola ends her days in a circus freak-show; a hapless Yang Kwei Fei pays for her triumph with her life.

While the two films share similar trappings, their heroines (and their moods) could not be more disparate. Lola, as played by Martine Carol, is a vulgar and vacuous adventuress – incapable of any emotion other than greed. Her meteoric rise and dizzying fall exemplify the moral rot of 19th century Europe, and Ophuls does not mean us to waste any tears over her fate. Yet in the vision of Kenji Mizoguchi, the scullery-maid-turned-emperor’s-consort Yang Kwei Fei (played by Machiko Kyo) blooms like a lily on the dung-heap of 8th century Imperial China. Pushed to become a courtesan by her rapacious family, she is wholly genuine in her love for the Emperor Huan Tsung (Masayuki Mori) and willingly gives her life to save his throne.

More a sacrificial victim than a hard-boiled femme fatale, Kyo as Yang Kwei Fei is in the tradition of other Mizoguchi heroines: the aristocrat fallen into disgrace in The Life of Oharu (1952) or the prostitutes in his last film, Street of Shame (1956). Women of strong principles but stronger emotions. Imprisoned, tragically, in a world where principle and emotion are luxuries that no woman can afford. Born into a poor family, Mizoguchi saw his sister, Suzu, sold as a geisha while she was still a child. Fleeing the family home after his mother’s death, the teenage Mizoguchi took refuge with his sister and her rich protector. Learning, as he did so, that love was a luxury while shame was the price of survival.

Only once in his career, in Empress Yang Kwei Fei, did Mizoguchi transplant this world-view to a non-Japanese setting. The notion of “exoticism” – a traditional barrier between most Western audiences and most Asian films – is doubly problematic in Empress Yang Kwei Fei. Presumably, the world of Ancient China seemed as “exotic” to Mizoguchi as it does to us. Is it this alien and unfamiliar dimension that makes the film stand apart, stylistically, from Mizoguchi’s other work? Western critics, Penelope Houston among them, rhapsodised about his “ability to assume a continuity between past and present not experienced with our own more self-conscious excursions into history” (1). True enough, until you watch Empress Yang Kwei Fei. Here – suddenly and without prior warning – “(t)he past is a foreign country: they do things differently there” (2).

Cut loose from the moorings of his habitual world, Mizoguchi enters a stylised realm of colour, décor and mise en scène that is quite unlike anything else in his oeuvre (including his only other film in colour, the realistic New Tales of the Taira Clan shot later in 1955). When Yang Kwei Fei meets the Emperor in the garden of the Imperial Palace, the blatantly artificial décor glows with an exquisite pallor – as if the whole scene had been sculpted out of mother-of-pearl. Far from aiming for any historical realism, Mizoguchi in Empress Yang Kwei Fei evokes an Imperial China as remote and fantastical as that of Carlo Gozzi’s play or Giacomo Puccini’s opera, Turandot.

In lesser hands than Mizoguchi’s, such faux-Orientalist visuals might slide perilously close to kitsch. In Empress Yang Kwei Fei, however, artificiality is not simply the style of the film but also its content. Family ambition and court etiquette will not permit either Yang Kwei Fei or Emperor Huan Tsung to indulge in a single honest or unguarded moment. The strong and genuine love that flowers between them comes (almost) at the cost of his throne and (finally) at the cost of her life. External pressures to one side, Huan Tsung’s adoration of Yang Kwei Fei also has a powerful (if not downright creepy) element of illusion. He falls for this obscure girl, initially, because she resembles a portrait of his dead wife.

This particular plot twist lifts Empress Yang Kwei Fei out of the stately rut of so many historical romances, into the eerie twilit realm of Preminger’s Laura (1944) or Dieterle’s Portrait of Jennie (1948), of Hitchock’s Vertigo (1958) or Lynch’s Lost Highway (1996). Consciously or not, such films are all re-imaginings (if not actual retellings) of the Greek myth of Orpheus and Eurydice. Similarly, in Empress Yang Kwei Fei, Mizoguchi feeds on the wealth of Japanese legends about men who fall in love with beautiful ghosts. He had already explored this theme literally in his most famous film, Ugetsu Monagatari (1953) – with Mori as the humble potter Genjuro, and Kyo (in white-painted face and flowing white robes) as the seductive ghost Lady Wakasa. Casting the same two actors – albeit in radically different roles – Mizoguchi gives a haunted and subtly unreal aura to the romance in Empress Yang Kwei Fei. This royal love affair strikes us as doomed before it begins.

For all its stylistic contrasts to the rest of Mizoguchi’s work, Empress Yang Kwei Fei may offer the purest, most powerful distillation of his world – described, most eloquently, by V. F. Perkins as “a place of brief pleasures and enduring sadness” (3). It is also, as befits its Orphic connections, a film that throbs with eroticism and death. As Yang Kwei Fei rises out of her bath, Mizoguchi cuts from a near-glimpse of her nude body to a (far more sensuous) shot of ripples on water. As she walks to her execution at the hands of the rebels, Mizoguchi cuts once again – from the hanging itself to a close-up of her jewels dropping, one by one, around her feet. Such visual pleasures, brief but enduring, have sadness at their very core.