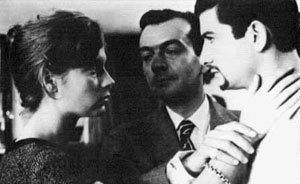 Claude Chabrol is one of the more enigmatic figures of the French New Wave. Although he has contributed prolifically to many different film genres, his critical reputation since the 1970s and 1980s has markedly oscillated according to the unevenness of his entire oeuvre. His first feature film, Le Beau Serge (1959), is sometimes regarded as the first feature film of the French New Wave, and thematically as well as structurally it is closely linked to Les Cousins. To many critics, Les Cousins is often regarded as the sophisticated city version of the former. Both films were immediate successes, but today Les Cousins remains one of his more striking successes.

However, in order to contextualise Les Cousins, we need to remind ourselves that not only was Chabrol thought of as the most “commercial” of the New Wave directors, he played a significant role in raising money for his New Wave friends like Jacques Rivette. Indeed, Chabrol donated his leftover stock from Les Cousins to Rivette to finish his cult classic Paris nous appartient (1961). And unlike most of his colleagues Chabrol focused on films policiers and melodramas – both highly commercialised genres with recognisable histories. Subsequently, the Chabrol canon highlights a multifaceted dynamic between director, genre and audience.

Although Chabrol is noted for his admiration for Alfred Hitchcock – best represented by his collaborative book with Eric Rohmer (1) – and his films policiers possibly more ironic and self-conscious than those of Hitchcock and Fritz Lang, they still adhere to certain conventions and rules of the genre. But in terms of Hitchcock’s cinema, what particularly influenced Chabrol was its thematic focus on the ambiguity of appearances and its reflection on the metaphysical ambiguity about moral responsibility which is generally located at the core of the melodrama. Although these two aspects of Hitchcock’s work have substantially influenced Chabrol’s work he has progressively developed his own interests, style and an oeuvre quite distinct from Hitchcock. Chabrol is not interested in the Hitchcockian relationship between pursuer and pursued, but rather with the notion that everyone in his films are always guilty. In this regard, Chabrol’s idea of guilt is of a darker Langian form than the traditional Catholic conception of guilt that is at the centre of the Hitchcock canon.

Structurally, what fascinates Chabrol is his love for the grotesque, as well as characters who are larger than life, and moreover, guilt, psychopathology and violent emotions. Thus, in this sense, there is a noticeable affinity between his films and the American film noir of the 1940s and 50s. Further, as James Monaco has observed, the moral configuration of Chabrol’s distinctive universe is not so much concerned with religious, Hitchcockian or Langian emphases but with the overall structure of his films (2).

Le Beau Serge is an autobiographically-inflected rural melodrama which is located in the non-appealing grey countryside of the director’s childhood. Basically, like Les Cousins, it is a film that hinges on the story of a “city cousin”, François (Jean-Claude Brialy) who returns to his home village of Sardent to find his childhood friend, Serge (Gerard Blain), once a gifted student, undergoing a severe alcoholic depression and located in a dismal marriage. But as the film unfolds we realise that Francoise, who is determined to “save” Serge, is actually an ex-theology student who gave up his attempt to become a priest. Also, Francoise is gravely ill with tuberculosis. However, true to Chabrol’s sense of irony, François realises in this drama of exchange that his motives to save Serge are quite ambiguous and that it is rather an attempt to save himself.

Serge, who does not take François’ advice, saves himself by going off with Marie (Bernadette Lafont) – his wife’s half-sister – who has had been François’ lover. Despite the film’s Christian symbolism and exchange/reversal narrative structure, it was quite a popular success when released. It was the last time that Chabrol would resort to a Christian solution and such symbolism.

As is generally agreed by numerous Chabrol critics like Robin Wood, Gavin Millar, James Monaco, amongst others, Les Cousins can be seen structurally as the sophisticated city version of Le Beau Serge. This time, Gerard Blain is Charles, the country cousin, who comes to city to study in the apartment of Paul (Jean-Claude Brialy). Again, we have the typical Chabrol set-up where Charles is the simple, good-hearted character and Paul is your archetypal, cynical city sophisticate and quite decadent.

Paul, who has Wagnerian parties, is sado-masochistic in character and is a borderline fascist, seduces the girl that Charles falls in love with. And to add to Paul’s topsy-turvy world of reversed fortune, Paul effortlessly passes his exam without any studying, while poor plodding Charles (who studies hard for his examinations) fails.

Charles in his despair half-plans to kill Paul, but again in Chabrol’s universe there is an exchange of fate that sees Paul accidentally shoot Charles. Poor Charles is an innocent victim in this “city inferno” study of the bourgeoisie, and yet we understand, as the film unfolds with its savage ironies of human character and fate, that perhaps Charles willed his own failure and even death.

It is important to note that Chabrol conceived the film before Le Beau Serge. It is wise to read Les Cousins in tandem with Le Beau Serge – as I have done here – because of their thematic and stylistic affinities as “role reversal” melodramas of ambiguity, guilt and despair.

For the first time in Chabrol’s work, Les Cousins shifts it social locus away from the working class and into the bourgeoisie where it will remain for the rest of the director’s oeuvre. It is also important to note that this film marked the beginning of a long-term collaboration with the screenwriter Paul Gégauff, whose sense of cruelty and black humour come to the fore of this extraordinary tale of urban fatalism and decadent irony.

And, if I may end on an autobiographical note, Les Cousins was the first Chabrol film that I saw in a Sydney art-cinema venue back in the 1960s. Les Cousins, a Balzacian black comedy of the moral complexities of human conduct within the bourgeoisie, and revolving cynically around the geometry of the standard sexual triangle – Florence (Juliette Mayniel) at the centre of the two cousins – offered a resonant, “hip” statement back in an era where one was treated to an “endless” stream of unexplored cinematic pleasures everyday.