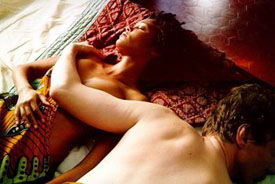 In one way or another, Bernardo Bertolucci’s films require to be let loose. Whether bodies hurl themselves at one another, or remain contained, there’s the sense of passion needing to be freed or allayed: the gaze which presses itself towards a lit window in Last Tango in Paris (1972); the eye trailing away from a body to scope the surrounding plain in The Sheltering Sky (1990); the camera tracking the diverging paths of candles in Stealing Beauty (1996).

That movement – the launching, searching eye – arguably reaches its zenith in Besieged, when we hear a piece of music being played for the first time, and the camera reacts like an astonished spirit: so excited that it has to go outside and race into the trees, whirl off all that energy. The resulting, circling shots intensify: we look up at the swirling sky, and it appears that release is imminent.

Besieged centres on Shandurai (Thandie Newton), a young woman from an unnamed African country where her husband is being held prisoner. She comes to Rome to study medicine, and works as a live-in cleaner for Kinsky (David Thewlis): a shy and self-conscious pianist with an oddly opaque face – often remote, yet at times verging on diabolical. It’s established from the start that Kinsky loves Shandurai. However, the fable-like outlines of the story – the man who gives all for love, or alternatively, the man who gives without hope of love – remain faint until the end.

Kinsky’s huge house has a four-storey spiral staircase, and also a dumb-waiter which moves between Shandurai’s room and his on the top floor, allowing surprise objects to travel between them. The two meld themselves around the features of the house, with Kinsky often glancing between banisters, through doorways, to see what she is feeling, and Shandurai constantly drawn upwards, through the series of stairs, by his music. Shandurai plays her own modern African pop downstairs, and the beat subtly finds its way into Kinsky’s fingers – illustrated by his endless tapping and twitching. Meanwhile, the change in Kinsky’s music is having its effect. When he composes a new piece, feeling it out as he goes, and finally striking the chord he wants, Shandurai’s face pops. Newton’s reaction shots here are extraordinary: with each succeeding note, we see her shock, her incredulity at the rightness of each progression.

This film is in thrall to the effects of music: the responses it awakens and the images it brings up. Throughout the movie, the camera takes sensitive and unhesitatingly beautiful pictures of Shandurai, as her naturally reserved body starts to grow and shift. As Kinsky plays, we see images which represent the exact effects of his music: a ball dropping at an acute angle corresponds to an emphasised note.

Despite his self-consciousness, when Kinsky is at the piano he gets so immersed and involved in playing that his face almost disappears before our eyes – his features dissolve in a blur of quick cuts, and he virtually “loses” his face. It’s close to the modernist ideal cherished by writers like D. H. Lawrence: where people are so swept away by feeling that they “have no head”. In particular, I was reminded of a scene in Women in Love in which Rupert Birkin is seen dancing, and while his body appears completely abandoned, his face remains flat and unmoved (1). In Besieged, there are moments when Kinsky becomes transfixed by music, and his face looks odd and abstract, nearly two-dimensional – almost as if it’s on a different plane. Thewlis’ physicality plays a part in this uncanny effect – he was cast for his “shocking paleness”, as well as his air of dissolution (2).

Part of Bertolucci’s uniqueness as a director is his ability to bring together elements that appear to exist on different temporal planes, as in The Sheltering Sky, where the visitors to Africa initially encounter a zone of seemingly artificial flatness: a cardboard new world. In Besieged, he uses a hand-held camera to denote the “spirit”-like awareness (3) that he and cinematographer Fabio Cianchetti envisioned – a sensibility which is alert and quickened by perfect music, but occasionally suspended, and as such reaching his ideal of freed energy.