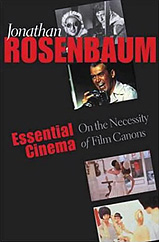 Jonathan Rosenbaum’s Essential Cinema: On the Necessity of Film Canons (Baltimore and London: Johns Hopkins University, 2004), takes a canonical view of cinema, asserting the importance of canons or critically selected works as an imperative process towards a deeper understanding of the seventh art. Rosenbaum is an inveterate list-maker but in reality he is a critic and a writer who makes lists only because he seeks to set things right, as he sees it – he should more correctly be called an inveterate alternate listmaker, a re-canonist, as he shows in a previous book Movie Wars (published in 2000) where he rails against the AFI’s (American Film Institute) list of 100 greatest American films, announced in 1998, dubbing this list “The AFI’s Contribution to Movie Hell”. Rosenbaum provides an alternate 100, a list of true movie buffery but which, from my perspective, also contains genuine oddities such as Thom Andersen’s Eadweard Muybridge, Zoopraxographer (1974) (no. 18 on his list), James Benning’s 11 x 14 (1977) (no. 19), Ken Jacobs’ Tom, Tom, the Piper’s Son (1969) (no. 90) and Andy Warhol’s Vinyl (1965) (no. 94), none of which I have seen. In Essential Cinema, Rosenbaum provides a list of “1,000 Favorites (A Personal Canon)” in the appendix, films selected from the dawn of the cinema to the present (1895–2003). While the list seems right, it might also be called idiosyncratic, and there are inevitably omissions (Boetticher’s A Time for Dying (1969) makes it, but not Seven Men From Now (1956), Ride Lonesome (1959), or Comanche Station (1960), no Leone film is listed, and none of Melville’s gangster thrillers, no King Hu, no Naruse, no Yamanaka, and as far as I can make out, no Australian film).

The essays collected in Essential Cinema similarly impart a sense of what’s excluded from reading the ones that are included. Is Pretty Woman (Garry Marshall, 1990) really a piece of essential cinema? If so, why aren’t there essays on Basic Instinct (Paul Verhoeven, 1992) or Showgirls (Verhoeven, 1995)? Is Li Shaohong’s Blush (1994) more essential than the Fifth Generation works and those of the latter Sixth Generation? I like the fact that Rosenbaum includes essays on directors such as Nicholas Ray, Anthony Mann, Otto Preminger, Samuel Fuller and Frank Tashlin but I wish he could also give us his insights on Budd Boetticher, Robert Aldrich, Richard Fleischer (whose The Narrow Margin (1952) and Mandingo (1975) make it to the 1,000 list), Joseph H. Lewis and Jacques Tourneur. Von Stroheim is in but Von Sternberg isn’t. Lang and Tati are celebrated but Renoir and Jerry Lewis are seemingly neglected. Having said all that, the omissions can be felt as a structural lacuna in his book. In a sense, what is essential is also what is left out and that is what Rosenbaum is on about – symptoms of the verities of the US distribution system and the growing gulf between film history and the contemporary cinema. Rosenbaum can only write about what gets seen (or is revived, in the case of older films) in the United States. There are gatekeepers who decide what gets seen and what is not seen. The problem, as Rosenbaum sees, it is that film production and film culture have come under the control and domination of what he calls “the media-industrial complex”, a phrase he coined in Movie Wars. The title of that book is a good indicator of the kind of critic that Rosenbaum is. He is an indomitable film culture warrior, and like a good screenwriter (Rosenbaum is no stranger to that craft, having once indulged in writing a screenplay for the actress Jean Seberg), he always makes sure that there are villains in his books.

In Essential Cinema, Rosenbaum takes on the role of an evangelical canonist to guide cinemagoers towards recognising what is good cinema by purging the dross of crass commercialism that corrupts the aesthetics of cinema. In Rosenbaum’s view, there is a lot of crass commercialism that isn’t only inherent in the form of cinema but is often something determined and constructed by multinational companies, distributors, and certain critics in the United States who are enmeshed in the “media-industrial complex”. These interests usually decry foreign films (and a crop of domestic independent and experimental filmmakers) thereby limiting the scope and chances of viewers to see them, pushing viewers instead to see deliberately dumbed-down commercial mainstream products. In many respects, Essential Cinema is an angry tract about the limitations of watching films (as opposed to movies) in that great empire of commerce and enterprise which is the United States of America. Rosenbaum’s writing is impassioned, urgent and critical but never inflammatory, didactic or condescending. There may be an element of Rosenbaum putting on the cloak of the high culture critic railing against the creeping aesthetics of low culture (which may explain some of his choices: Straub-Huillet for instance, Antonioni, Rivette, Tarkovsky) but this would be a misreading of the book. Much of it is taken up with populist cinema (or in the jargon of genre theorists, “popular culture”), and Rosenbaum convincingly makes his case for the works of directors such as Raoul Ruiz, Hou Hsiao-hsien, Edward Yang, Stanley Kwan, Mohsen Makhmalbaf, Terence Davies, Kira Muratova and Bela Tarr, really to debunk the notion that they are difficult and inaccessible to American audiences (or to any audience around the world). If we look at Essential Cinema as a critique of America (which it is in many respects), Rosenbaum belongs to the tradition of the fighting liberal, possibly a dying breed in a nation so ruled by fear and xenophobia. Rosenbaum is effectively making a plea for internationalism, pointing out that America is becoming more nationalistic and that many of its intellectuals (film critics included) are going along for the ride in the nationalism rollercoaster driven by the media-industrial complex.

This depressing message aside, Essential Cinema is otherwise a joy to read. There can be no other critic as committed as Rosenbaum is to giving his readers a sense of what is essential in terms of the aesthetics of the cinema and to emit the pleasure of that essentialism. Rosenbaum can be just as good a formalist critic as he is a journalistic one, as proven by his analysis of Robert Altman “Improvisations and Interactions in Altmanville”, surely a seminal text for anyone wishing to understand that director’s aesthetics. And, for all of Rosenbaum’s insights into the foreign films he champions, it is his writing on home-grown directors and their films that provide the most sublime epiphanies in my mind – e.g. his pieces on Phil Karlson’s The Phenix City Story (1955), on Orson Welles, Rudy Wurlitzer, Elaine May, Samuel Fuller, Steven Spielberg, Frank Tashlin, and Otto Preminger. (Preminger of course was born in Vienna, but Rosenbaum’s comments on his films are often tinged with a home-grown skepticism for foreign-born directors tackling distinctly American subjects. For example, Rosenbaum questions Preminger’s touted sense of objectivity in Advise and Consent (1962), which to my mind is a masterpiece, as well as Preminger’s handling of the finale in Bunny Lake is Missing (1965), which seems to me perfectly in tune with what the rest of the narrative was reaching towards, but which seems to Rosenbaum “stylistic overkill”. These are indicators of that critical skepticism that can only come from a lifetime immersion in the reading of American directors and American cinema. My feeling somehow that Bunny Lake is Missing, which I recently saw on DVD, is an underrated masterpiece remains, but such is the quality of Rosenbaum’s criticism that I would wish to review all of Preminger’s films over again, which surely is Rosenbaum’s pedagogic intent. Really it’s a matter of seeing these films that is after all what is essential.)

Rosenbaum’s knowledge as a critic and skill as a writer find a happy congruence in this volume of his collected essays. He is a fine critic and a fine polemicist, and if I’ve called him a fighting liberal before, it is in the expectation that he and his kind will go on fighting as strongly as they have done. In Essential Cinema, Rosenbaum proves he is an essential critic, one we mustn’t fail to read lest the media-industrial complex and indeed its counterpart, the military-industrial complex, in the United States have their way in controlling what we see and read.