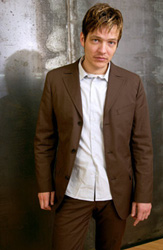 There is an odd paradox at play in Danish cinema at the moment: at the same time that Danish films are selling heaps of tickets at home and abroad and winning awards at festivals around the world, a number of key players in Denmark are claiming that there are no stories to tell in their boring little country.

When Thomas Vinterberg was asked at a roundtable interview last year in Berlin why his last two films were set in America (It’s All About Love [2002] and Dear Wendy [2003]) he replied that Denmark “is only five million people and they’re quite wealthy so there’s nothing to talk about.”

Longtime von Trier business partner and Zentropa Studios boss, Peter Aalbæk Jensen, seemed to concur in comments made to LA Weekly writer, Brendan Bernhard, who flew over to do a story on Dogville. “It’s very hard to tell a story here because nothing is happening, you know? It’s not interesting that people meet and work and go home. So we have no stories … it’s well organized, it’s civilized, everything’s so decent and nice – and people are all bored to death.” (1) Bernhard notes in his piece that these sentiments were echoed in Denmark “by almost everyone I spoke to”.

Clearly there is a certain amount of presumptuousness, not to say arrogance, at play in assuming the right to speak on behalf of five million other people, and yet these sentiments are commonly voiced in Denmark and represent something a bit more complicated than just the predictable weariness with the familiar.

Denmark is a small country, seldom at the heart of world events, and in tactic admission of this fact and perhaps as a kind of self-defense mechanism, many Danes tend to shrug off the country’s presence on the world stage or lack thereof with self-effacing dismissals as steeped in irony as they are half-serious. The boast, for example, that one is “world famous in Denmark” – as if that could possibly be worth anything – is often bandied about. And yet in their own way most Danes are ultra-patriotic and wouldn’t want to live anywhere else, including the majority of Danes in the film milieu who, for example, on the basis of published comments, find the prospect of living and working in America utterly inconceivable.

As a setting, Denmark would indeed seem to be eminently ill-suited for certain types of films. Although the country does have its charms, it has no real wilderness, no mountains or major river systems, and is devoid of the kind of breath-taking geography that makes for dramatic location shooting. Again, it is a small country, which can be traversed by car in six hours, seeming to rule out “road movies.” And its recent past is not fraught with the kind of conflicts that scriptwriters drool over. It has fought no modern wars, it is a mono-culture, and as the popular (if mistaken) wisdom goes, there is no poverty here. It is the essence of the welfare state.

Perhaps more germane to the discussion, it is a country on excellent terms with English, is “outward looking” by necessity and is deeply in the thrall of imported pop-culture mythologies from the U.S. and the UK.

America: land of wide open spaces, endless highways, great wealth side by side with poverty and violence. Social inequity in spades. Apparently the stuff of endless dramatic possibility. 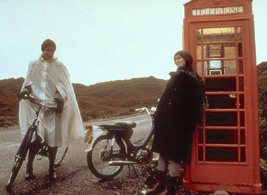 Scotland has become an even more sought-after location for Danish filmmakers who have turned it into a kind of social-realist theme park. First, of course, came von Trier’s Breaking the Waves (1996). And Lone Scherfig has made her last three films there – the realist-tinged love story Wilbur Wants to Kill Himself (2002) and the in-progress What Wayne Didn’t Know and Waltzing Griselda, which were shot simultaneously. And when Søren Kragh Jacobsen was looking for a setting for Skagerrak, his roughhewn tale of outcast losers finding common cause, he set it in Scotland – specifically in Glasgow (also the setting for Wilbur) which apparently looms large in the Danish imagination as the epitome of a tough, working-class city. This is where one finds authentic social realism, apparently. As Kragh Jacobsen commented to the press, the story could never be credible in Denmark since there the down-and-out lead character of Marie “would have been suffocated in a forest of social aid workers”.

But if Denmark lacks stories and settings, why have the films set in Denmark done so much better than the foreign-based pictures? It’s no surprise the Danish-set and cast films have drawn better domestically, but the startling fact is that they have even attracted bigger crowds and better critical assessment outside Denmark – despite the drawback of subtitles. These “international” films by Danish directors seem to lack something essential. Good stories, perhaps?

What produces good stories? And is there any such thing as a “boring country”? According to the wisdom’s espoused by Vinterberg and Aalbæk Jensen, it seems only violent, poverty-stricken countries can supply good stories. And does it have to be a large country? Is a country of five million people too small to have any good stories, or is it just too small to contain the swelling egos of its star directors? Is America the mother of all good story-telling opportunities, or has this current generation of Danish filmmakers just been weaned on the American cultural mythologies and unduly influenced by their partiality to early-’70’s “New Hollywood” directors such as Marty Scorsese?

And why not make social realist films in Denmark? Back in the ’60s and ’70s there were plenty of exceptional Danish produced social-realist films that explored various subcultures and criminal milieus with plausibility and occasionally a sharp political edge. Today what passes for social realism, often under the banner of Dogme, are middle-class couples-in-crisis films such as Kira’s Reason – A Love Story (Ole Christian Madsen, 2002), Truly Human (Åke Sandgren, 2001) and Open Hearts (Suzanne Bier, 2002), for example, or dowdy melodramas like Italian For Beginners (Lone Scherfig, 2000) – none of them social realism in the classic sense (2). (In that sense Dogme has been something of a red herring, providing the veneer of realism without the substance. But that’s another story.) Nor was The Bench (Per Fly, 2000), a film about a struggling alcoholic, genuine social-realism despite being loudly hailed as such in Denmark. Manipulative, melodramatic and scripted to the hilt, it was more like a TV movie.

In fact the choice of stories and the themes and settings of current Danish films have much more to do with the backgrounds of Danish filmmakers and the nature of the business itself than any supposed dearth of stories to tell in Denmark.

The directors, the scriptwriters (all two of them: Anders Thomas Jensen and Kim Fupz Aakeson, who write most of the films), the producers and just in general the people making movies in Denmark, are an inbred, incestuous lot, be they couples, ex-couples, longtime friends or bitter enemies. One big, not always happy family. This is to some extent inevitable in a film industry as small as Denmark’s that produces on average only 20 features a year, but nevertheless it goes some way towards explaining the lack of bio-diversity, so to speak, in Danish cinema today.

The nature of the movie profession itself, driven as it is by a success-begets-success dynamic, encourages the formation of “in-groups” and introverted ways of thinking as collaborative relationships that prove successful are kept in tact ad infinitum, but it also effects the ways stories are found and formed. Commercial filmmaking is a highly institutionalised art form. In what other creative medium is it almost obligatory that one spends four years in film school, or decades at Danmarks Radio – the main Danish TV station – to break in? Why not spend the time hitch-hiking around the world having encounters and experiences that can be turned into stories?

To assume that hitch-hiking around the world makes one a good story teller is perhaps a stretch – look at all the great writers that led quiet, sedentary lives – but it is fair to ask, “who are these people making the movies and telling the stories?” What have they done? Where have they been? Their time is so stretched between family and work that if they travel it is usually only to film festivals, meetings with producers or location shoots. Von Trier is perhaps European film’s most celebrated stick-in-the-mud. He never goes anywhere and he brags about it. How story-tellers call on personal experiences to create and mold their fictions is a fiercely individual thing, but the popular wisdom – however cliched – that good stories are the product of adventure, worldly experience and personal challenges (enshrined in the lore of writers like Hemingway and Kerouac) finds no echo in the commercial filmmaking milieu of today’s Denmark. For example when Lars von Trier talks about where he gets his impressions of things (America, for example), it is usually from TV.

As a group, Danish filmmakers comprise a left-leaning, culturally homogenous upper-middle class demographic, and their chosen profession is an extremely career-driven one: each successful film must lead to something bigger, and the subsequent pressures, applied by the industry or by themselves, to make such (inevitably English-language) films set in foreign locations is based as much on purely business considerations as it is on a search for good stories that supposedly exist in plenitude outside Denmark. Big international breakthroughs are the bread and butter of the Danish film industry and Peter Aalbæk Jensen also has a vested interest in seeing that directors find stories outside Denmark that can have a broad appeal. 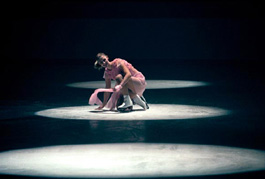 The choice of story in film is as contingent on commercial considerations as any other aspect of the finished product – choice of actors, directors, funding partners – but it would still seem to be necessary that the people in the milieu possess a broad diversity of experiences and orientations. Lack of diversity leads to creative anemia even as the “hits” keep coming and the ticket sales climb, a situation acknowledged and broadly decried by Danish critics in recent years. We get one dreary couples-in-crisis film after another because apparently this is what they know or can imagine. For his part, Lars von Trier, who famously hasn’t been anywhere or done anything, continues to play puppet-master in his hermetically sealed ivory tower of ideas and despite his immense status breathes no fresh air into Danish filmmaking. Actually experiencing something seems almost unnecessary to him, as exemplified by his claim that his never having been to the U.S. is actually to his advantage when he sets his films there. And Thomas Vinterberg’s last film, It’s All About Love, was an essay on the spiritual isolation he encountered while traveling extensively around the film festival circuit to promote The Celebration – a film based on a film experience so to speak, and generally acknowledged to be an exceedingly weak and confused piece of story telling.