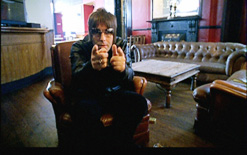 There is intensity to Liam Gallagher’s levity. When the lead singer of Oasis was asked in the Brit Pop documentary Live Forever (John Dower, 2003) about his androgynous appearance, he repeatedly demanded clarification of the word’s meaning. Avoiding a Hansonesque “Please explain” in rebuttal, he finally offered a knight’s move answer to his questioner: the basis of his popularity was not “a feminine side”, but a good haircut.

British culture has been rich with doco/mocko/facto-fictional media programming in the last two years. Michael Winterbottom’s 24 Hour Party People (2002) darted around the simulacrum, playing with punk, acid house, time and narrative. The comedian Steve Coogan (re)created Tony Wilson, the legendary Manchester broadcaster and pop music “guru”, as an edgy amalgam of narrator, character, seer, entrepreneur and King Lear (1). Similarly Peter Kay, through extraordinary observational skills, has become a leader in comic ethnography. His “Mum wants a bungalow tour” (2) created humour from recognisable situations in family life: the difficulty of finding a working pen when writing a telephone message; the grubby uncle lurking at weddings with ever-ready sleazy comments; and grandmothers obsessed with both home security and funerals of people they hardly know. Concurrently The Office, an extraordinary critique of reality television which confirms what media studies theorists should have been writing for the last five years, has captured (and entwined) the futility and mindlessness of post-work culture and the banality of contemporary television. The cringe of this recognition comedy is beyond humour: it transgresses the boundaries of self and society, identification and identity. As an explanation for our investment in both the banal and the image, The Office provides a greater historical record of employment and power in our era than most daily newspapers.

Such programmes provide a framework to understand Live Forever, the documentary of Brit Pop as told by its survivors. The ghost-like image of a young Tony Blair, before being weighed down by a fruitless search for Weapons of Mass Destruction and the negotiation of a coalition with a willing neo-Conservative, remains the haunting image of the film. Like John Harris’ The Last Party: Britpop, Blair and the Demise of English Rock, published by Fourth Estate in London in 2003, the film shows the awkward, ambiguous and – in the end – unsuccessful alignment of pop and politics. Tony Blair was never going to be as interested in his hair as Liam Gallagher, and the Prime Minister does know the meaning of androgynous without flicking through Sexuality for Dummies. The point made in the documentary, which offers a sharp jolt within the political consensus of our present, is that the Brit Pop lads recognised and attacked the Americanisation of Britain through the 1980s and 1990s. Cool Britannia was as much about claiming cultural space and separation from the United States as offering “original” music or fashion. With American grammar currently lashing out to punctuate popular culture in the United Kingdom and Australia, the anger of Jarvis Cocker and the Gallagher Brothers has found a new resonance and audience. 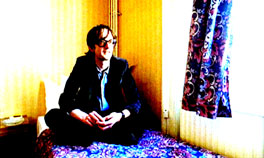 The documentary is based on interviews with “above the title” stars of Brit Pop, including not only Liam Gallagher but also his brilliant, but pharmaceutically-challenged brother Noel, bitter and twisted Damon Albarn and coolly distant Jarvis Cocker. Jon Savage, the outstanding style journalist and cultural commentator, provides the spine of the story. Selected news footage, commercials and tacky television splice the narrative, alongside the political destructions and successes of Margaret Thatcher, John Major and Tony Blair. Most usefully, Live Forever probes the relationship between Brit Pop and “lad culture”. The diverse social spaces of Manchester, Colchester and Bristol are evocatively unearthed. 3D from Massive Attack conducted his interview from the passenger seat of a car cruising late-night Bristol. Dub always sounds much better in the dark. Damon Albarn stroked a ukulele in a London pub. Jarvis Cocker reflected upon the past, while propped on a single bed in a small upper-storey flat. Noel Gallagher held court in a velvet throne-like chair, confirming his status as Brit Pop’s king and Tony Blair’s favoured consort in spin. Such crafted and intentional use of filmic address increases the irony around Noel Gallagher’s critique of the inauthenticity of Pop Idol and music in the 2000s. He stated, “everything is choreographed”. Gallagher – to paraphrase U2 – confirms that his image is even better than the real thing. Live Forever shows that Brit Pop was preened, spun and spruiked by the music press and news services, and exploited by Tony Blair. John Dower described the film as “a savage education in Real Politik” (3). It is also a tale told by anoraked singers who were fooled by their suited “representatives”. Menswear was not enough to build a political movement.

The documentary is useful for film studies scholars, as it demonstrates how to deploy interviews in the creation of a narrative. Further, the evocative use of music creates a palette of popular memory better than any conventional flashback montage. Beyond its structure, Live Forever offers a political warning. New Labour and “new” Britpop both duelled with identity. Both lost direction, commitment and popularity. Through the 1980s, the mantle of Greatness was lost from Britain. By the 1990s, the outsiders returned to visibility, with Massive Attack offering pauses and pulses, the Gallagher brothers spitting expletives and Jarvis Cocker shaking up masculinity and class. It was a temporary re-energising of the body politic.

Only a few years later, the Pop Idol format favoured cover songs, conventional body shapes – or rigid commentary for corporeal dissenters – and ballads. With pretty and bland pop as the default position for conservative eras, it will be some time before we assess if Brit Pop changed, critiqued or reinforced music, celebrity and politics. Live Forever offers an entree for the commencement of that discussion.

Marginality and deviance are necessary to create popular culture. Brit Pop, in its angry retch at “the system”, used popular culture to channel despair and anger into the chasm between aspirations and actuality. Irvine Welsh – while discussing wider political and social movements – also pinpointed the trajectory of Brit Pop as “you’re either right outside society or you’re exploited” (4). He argues that those in regular employment, frightened of losing their weekly pay cheque, have no mental space to consider alternatives. Those “outside” the system, while being materially disadvantaged, actually have the privilege of thinking critically about their surroundings. In the semiotic crunch between The Office and Live Forever, it is yet to be seen if “Wonderwall” will outlive “Handbags and Gladrags”.