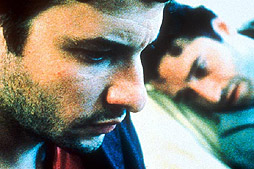 In the documentary Cinéma de notre temps: Jacques Rivette – Le veilleur (Claire Denis and Serge Daney, 1990), the director of the recent Histoire de Marie et Julien (2003) talks about the shame of shamelessness – le pudeur de l’impudeur – referring to the difficulty of filming the look of human bodies. There is a moment in Son frère (Patrice Chéreau, 2003) when Thomas (Bruno Todeschini), hospitalised because of a terminal illness, is being shaved by two nurses. Chéreau shows the whole process as a reverse-shot through the gaze of his brother Luc (Eric Caravaca). The moment, as much for its crudity as for its intimacy, could fall into morbidity, but in Chéreau’s hands it attains that balance between shame and shamelessness that Rivette talks of.

A shot of a rocky coast in Brittany opens and closes Son frère: an image as wild as it is calm, as physical as it is poetic. There, Luc and Thomas talk to an old man (Maurice Garrel). When he leaves, one of the brothers asks the other “Do you know him?” The answer is no. Beyond the transient characters that appear and disappear (such as this old man), Son frère is a portrait of an illness, of a body in pain, but above all it is a portrait of a relationship between two brothers.

Two brothers and an illness. Son frère presents itself as nakedly as its characters. With his latest film Chéreau seems to have found the perfect balance between the physical and the invisible in relationships. Whereas in Intimacy (2001) he focused on the desire between two people, Son frère begins with the body in pain. Whereas in Intimacy it was the couple, a male-female sexual relationship, Son frère points to the relationship between two brothers. In Intimacy the frames were saturated with flesh and viewed from limitless angles. Son frère uses Intimacy‘s incisive camera to get to the fragility of bodies and feelings. In some ways Son frère could be seen as a perfect reverse of Intimacy: light turns from warm to cold and eroticism turns into physical decay. There is the feeling that Chéreau is not hurried in building the relationship between his two characters. Though it is true that the situation is soon set straight (Thomas visiting Luc to tell him he’s sick at the beginning of the film), the connection between these two brothers is presented as a story barely whispered. As if that shame of shamelessness were transferred from the physical to the intimacy of relationships.

The filmmaker (and theatre director) came across the film’s source material, the novel by Philippe Besson, while he was studying the suffering of Napoleon (1). Son frère presents a physical degeneration with dignity, and transfers this dignity to human relationships. There is no sentimentality in this, no excess. Luc has been chosen by his brother to take care of him. “I didn’t ask anyone to come here”, says Thomas to his family and girlfriend, who come to visit him in hospital, “I only asked Luc”. This simple fact is subtly verbalised but it lies beneath the surface of the entire film.

From Thomas’ point of view, the brother that always existed but was not always there suddenly appears. There is no dark past, no sudden rupture. A polite familial relation turns into affection. While Thomas seeks the brother who was never present, Luc’s life is transformed by the appearance of his brother’s illness. Sickness doesn’t only break down the patient’s life, it also changes all those around him. As they become closer, Luc’s private life is silently sketched out: his life with his boyfriend, his parents, his memories of a childhood with his brother. As the character becomes deeper his gaze also becomes deeper and Eric Caravaca’s eyes form the link between the two main characters. Luc and Thomas are shown equally; though one expresses health and the other expresses illness both are filmed in the same unflinching way. One is strong, the other weak (Todeschini lost twelve kilos to play Thomas); one is homosexual, the other heterosexual; but both are brothers, both are the “son frère” (“his brother”) of the film’s title. Eric Caravaca’s two-day beard isn’t less impressive than Bruno Todeschini’s and while Thomas’ body is shown, Luc’s gaze is as painful as his brother’s sick figure.

In contemporary cinema, nobody films the body like Patrice Chéreau, a kind of Francis Bacon who wields a camera instead of a paintbrush. Chéreau likes flesh. Everything in his cinema is carnal, from Isabelle Adjani’s operatic passion in La Reine Margot (1994) to Stuart Staples’ voice in the Tindersticks’ song that opens Intimacy. His figures are fragmented and even faces are often shown in close-up, as if there was no embarrassment in the presence of human imperfections. The fact that Son frère was conceived as a television movie (produced by ARTE and programmed on French television before screening in theatres) allows Chéreau the chance to use as many close-ups as he wants, getting closer to his characters’ faces.

The balance between physical decay shown in a crude way and the fact of looking at it relies on the shame of shamelessness. Just as it does in the films of Ingmar Bergman, another director who worked in cinema as well as theatre (and television). We can find the same embarrassing situations filmed with a similar rigour in some of Bergman’s films. One recalls several depictions of sex in The Silence (1963), as when it’s the focus of a look (Gunnel Lindblom watching a couple making love wildly in a theatre) and when it’s lived in absolute loneliness (Ingrid Thulin’s masturbation). And though sex is not the issue in Son frère, there is here the same blend of crudity and dignity in the face of illness in the face of sexual discovery in The Silence. Both directors are fearless in approaching what they are filming, knowing exactly where dignity ends and morbidity starts. 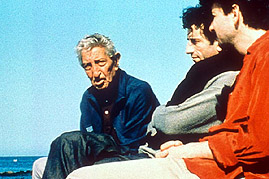 In Son frère, there is no trace of morbidity, but there is a slow eruption of intimacy. Lives are shown patiently, at the same rhythm that Luc and Thomas build their confidence in each other. Luc becomes defensive when his brother asks him about his boyfriend and tries to distance his boyfriend from the hospital and from his brother’s sickness, intent on maintaining the absolute privacy of his life. Finally, Luc takes the initiative and talks to his brother: no great revelations, only a few confidences or some memories. All the characters function as bridges between Luc and Thomas. The kiss Luc gives to Thomas’ girlfriend is no more than a way to become closer to his brother. As both of them become closer we ourselves move into their lives. When Luc enters his brother’s room while he is undressing his girlfriend, it’s not only his entrance, it’s also ours.

Far from the hospital, on the coast of Brittany, where Thomas is going to live out his last days, Chéreau discovers the calmness of intimacy. At the beach, where haemorrhaging is an ever-present menace, kindness becomes suffering’s companion. When Luc helps his brother to take off his jumper as they walk along the beach the camera becomes as unstable as Thomas’ fragile body. When Thomas’ nose starts to bleed the camera moves in closer until it hurts us in its intensity. Chéreau films pain with rigorous understanding and through Luc’s eyes he finds the calmness after the suffering, the traces of a relationship that has become more intimate.

Finally, when Thomas goes further into the sea, what remains is the calmness and depth of Luc’s gaze. As if Chéreau, and his two brothers, had found in the imperfections of a body in pain the meaning of peacefulness, building their personal “Requiescat In Pace”.