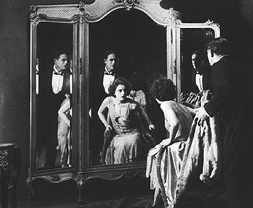 The Joyless Street is best remembered for featuring Greta Garbo in her second leading role. More significantly, Pabst’s third film marked the beginning of the mature style that would govern his filmmaking for the next six years, allowing him to create his subsequent masterpieces and placing him amongst the leading directors of the period. With this moderately budgeted film, based on a serialised novel by a right-wing radical, Pabst created a realist work, punctuated with restrained expressionist flourishes and driven by the nexus of money, power and sex. Aimed at a commercial audience, the film presented very lurid material without any artistic pretensions. Its rejection of an expressionist approach in favour of a realistic representation of, admittedly, very melodramatic material – combined with a socialistic message – created an impact with audiences and critics. Its success launched Die Neue Sachlichkeit (the new reality) movement in German filmmaking that subsequently included such films as People on Sunday (Robert Siodmak and Edgar Ulmer, 1929) and Kühle Wampe (Slatan Dudow, 1932).

Pabst’s films of this period differ in two distinct ways from most of those produced within this movement. Although Pabst’s films may be damning of the existing social system, the actors’ highly nuanced performances allowed even the most villainous character a moment of dignity. A prime example of this occurs in The Joyless Street when the butcher, the most abhorrent character in the film, portrayed by Pabst’s long-term collaborator Werner Krauss, awkwardly attends a brothel in his Sunday best. He is rejected by Greta (Greta Garbo), yet once he removes his gloves he is granted a minute of peace and shown eating a slice of cake. Secondly, unlike other political filmmakers, Pabst frequently focused on his actresses and placed women’s conditions at the turn of the century at the centre of his concerns. In this respect, he formed a hybrid between the political film, ostensibly a male-centric genre, and the women’s melodrama; a hybrid adapted by John Stahl, most strikingly in Imitation of Life (1934), and later refined by Douglas Sirk in his melodramas for Universal in the 1950s.

Drawing on Pabst’s own experiences in post-war Vienna, The Joyless Street tells the story of two women whose lives take different routes during the period of hyper-inflation in immediate post-war Vienna. One is the poverty stricken Marie (played by Asta Nielsen), who stumbles into prostitution while attempting to raise money for the man she loves. The other is Greta, the daughter of a struggling middle class bureaucrat, who resists the temptation of the easy money that prostitution offers. The ultimate moral of the story, that virtue is its own reward, is surprisingly old-fashioned for a film that is explicit in its rendering of sex and base human (or more aptly male) behaviour. Perhaps this moral is the remaining vestige of its right-wing origins?

The downtrodden Marie never has a chance. Her father beats her at the beginning of the film, and her relationship with Egon, her supposed lover, is non-existent. He is more interested in two other women; an older one who supplies him with the means to raise money and the younger Regina, the woman he truly loves, who wants it. Asta Nielsen portrays Marie as a slightly “retarded”, faded beauty, face caked with too much make-up and in love with the much younger Egon. Not fully comprehending what is happening to her, she drifts into prostitution to raise money for the man who shows no interest in her. In an era when exaggeration was the rule, the immobile Nielsen uses only her eyes and hands to express the emotional vacuum of someone who has lost everything. As M. S. Fonseca so astutely stated: “’Asta Nielsen’ means the power to speak of pathos, to see pain, and to find the middle path between Baudelaire’s flower of evil and the sick rose of which Blake sang.” (1)

In 1925, the 35-year-old Nielsen was one of Scandinavia and Germany’s premier actresses and the film was put into production based on her involvement in the project. The Joyless Street was nevertheless one of her last films. To modern audiences her charisma is enigmatic, her squat figure and frumpish dress sense don’t exude star appeal, but this doesn’t apply to her co-star. The 20-year-old Garbo had just made Stiller’s The Atonement of Gösta Berling (1924) and was on the brink of stardom. The studio-head Louis B. Mayer had seen Gösta Berling, but had not yet been able to contact Stiller and Garbo to offer them contracts with MGM. Pabst had also seen the film and enthusiastically wanted Garbo for the second lead. Serendipitously, he located the director and star in Berlin just as they were about to leave the city. They were broke and needed work. Pabst drew a very different performance from Garbo to the one he garnered from Nielsen. Greta, the character, although placed in much the same situation as Marie – unable to obtain meat during a food shortage, in dire need of money, tempted by prostitution – is a younger, more privileged woman. Garbo’s performance, in contrast to Nielsen’s, imbues her character with great vitality, something that is lacking from her more detached Hollywood persona. Early in the film, when Greta is exhausted, there is a lethargy that seeps into her soul. Later, when more dynamism is required, a youthful vibrancy surfaces. When the American officer agrees to rent a room so that the family will be capable of paying its living expenses, the pores of her body seem to pulsate with a contagious exhilaration. As Louise Brooks, another actress who was touched by Pabst’s genius, said of Garbo, “she gave him the purest performance of her career” (2).

Yet it is for Pabst’s political acerbity that the film is truly memorable. Many contemporary critics viewed the film as a stirring moral protest, and by modern expectations of a silent film, the explicit portrayal of sexual promiscuity is surprising. Pabst powerfully documents the moral and economic collapse of a recently great society. The dark centre of the film is the brothel, whose madam also controls the adjoining night-club and clothes shop. Like Dr Mabuse, her power exerts control over all aspects of other people’s lives. The wealthy celebrate while the poor struggle to find food. Stock market manipulation by the wealthy wreaks disaster on the poor and weak. The economic collapse feeds moral corruption, as the wealthy are unabashedly depicted as sexually exploiting those less fortunate than themselves. Regina tells her suitor, Egon, that only money can make her happy. And she is happy for him to prostitute himself to get money for her. A policeman enters the brothel, investigating a murder and informs the madam that he is on official business, the implication being that he needs to tell her that his visit is not for pleasure. This is a remarkable indictment of authority in a nation where the respect for it was all pervasive. The righteous military officials of the American Relief Fund, as well as a sleazy foreign investor visit the night-club to experience what Viennese women are ‘really’ like. Pabst’s raw illustration of the unbridled male libido, as well as his searing indictment of a bankrupt political system, led to the film being banned or recut in most countries outside of Germany:

When completed it was ten thousand feet in length…. France accepted the film, deleting two thousand feet and every shot of the ‘street’ itself. Vienna extracted all sequences in which Werner Krauss appeared as the butcher. Russia turned the American Lieutenant into a doctor and made the butcher the murderer instead of the girl (3).

This precedence set the pattern for what was to happen to most of Pabst’s subsequent pre-WWII German films. These were variously censored and/or re-edited. They were too confronting for the general public, yet Pabst’s reputation grew despite of, or maybe because of, these interferences with his artistic vision. Unfortunately, the shorter versions of The Joyless Street were shadows of the former major work. This marked the film as only worthy of mention for Garbo’s performance. This has changed in the last few decades with restoration work positing the film in its rightful place amongst the canon of important works by a great, but poorly appreciated filmmaker.