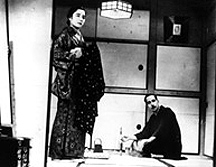 The career of Yasujiro Ozu falls into two main phases: from 1927 when he directed his first feature (Sword of Penitence), to 1937 and What Did the Lady Forget?; and from Record of a Tenement Gentleman (1947) ten years later to his final film, An Autumn Afternoon in 1962.

In the ten years that separated these two prolific periods of production (in the first Ozu averaged between two and three films per year; in the second it was one) Ozu made only two films: Brothers and Sisters of the Toda Family and There Was A Father (1942). For various reasons, the former can be seen as a transitional work that looks both backwards and forwards in its director’s oeuvre.

Made between October 1940 and February 1941, Brothers and Sisters of the Toda Family can be seen as a summation of the films Ozu had been making almost from the beginning of his directorial career. Whether they be student comedies (I Graduated, But… [1929]), salary-man comedies (The Life of an Office Worker [1929] now lost, and Tokyo Chorus [1931]), thrillers (That Night’s Wife [1930]) or examples of the shomin-geki (“home drama”) (Passing Fancy [1933] A Mother Should be Loved [1934] and An Inn in Tokyo [1935]) – Ozu’s pictures from the late 1920s and 1930s almost exclusively revolve around lower-class characters. And with this comes problems of money and employment that Ozu explores, not as the sole focus but as part of the tapestry of everyday life.

Brother and Sisters maintains this class emphasis by focusing on initially wealthy characters who, through the death by heart attack of the family patriarch, are left poor and debt-ridden. This conceit specifically recalls an earlier Ozu film, the aforementioned A Mother Should be Loved, which similarly concerns a family whose previously harmonious life is shattered when the father dies of a heart attack. As in Brothers and Sisters this sudden, unexpected death is the catalyst for the surfacing of hidden tensions and ruptures within the close family unit (the dissolution of the family after its patriarch’s death is also central to other late Ozu films, most clearly his penultimate The End of Summer [1961]).

The sense in Brothers and Sisters of the facade or image of the family (so succinctly captured in its opening scene of them having their photograph taken) being subjected to fissures more from within than without is one of the ways in which this film looks forward to the masterpieces of Ozu’s later period. In those films, it is often – though not always – the case that familial dissolution owes much to pressure placed on the protagonists (generally to marry or to arrange a marriage) from inside the family, even though outside, social codes and customs are always discernible.

It is surely this feeling that has led Donald Richie to conclude that in Ozu, “Characters are family members rather than members of a society” (1). And although this is a contentious point (as Robin Wood has noted: “How can they possibly be one without also being the other?”), it nonetheless neatly sums up the sense that the hermetic world in Ozu’s late work begins and ends with the family (2). And this is an idea that finds one of its first and most concise expressions in Brothers and Sisters.

Also, as in Tokyo Story, the tensions arise in Brother and Sisters when parents come to live with their children in an unfamiliar and strange environment. And this leads us to another facet of the film that prefigures Ozu’s later work, namely, his use of space and locale to delineate character. The latest issue of CineAction features a brief, typically insightful article by Robin Wood on Ozu’s Tokyo Twilight (1957) in which he puts forward a reading of its aesthetic, laying much stress on the way the protagonists of this film seem, like the city in which they live, to be “contaminated” (3). This can also be witnessed in Tokyo Story (for example) where the contrast between traditional, spiritual Onomichi and modern, industrial Tokyo underlines the generation gap between aged parents and middle-aged children.

The foregrounding of location as a character in its own right is clearly signalled in the first scenes of Brothers and Sisters in the way that a shot will hold on an empty space for four or five seconds after a character has exited. Thematically speaking, this technique (prefiguring Antonioni by at least 15 years) comes into its own later in the film as the characters find themselves in different locales. For example, the dilapidated seaside villa into which Mrs Toda and her daughter move, comments directly on their position as once wealthy people who are now in disarray, and also on the fact that they now have no position within society. The villa, like its broken inhabitants, is on the fringes, the edges of society, looking out on the emptiness of the sea beyond (ironically, this villa would also have served to separate the Todas from society before their collapse, connoting their status as rich and therefore above normal city locations).

In other ways too, this film marks an important step in the stylistic development of Ozu’s cinema. One can see, for instance, the seeds of his elliptical narrative construction being sown at the beginning, when the death of the patriarch is communicated through the reactions of his friends and family. This is a crucial feature of the Ozu technique, and is most clearly seen in the films Late Spring (1949) and An Autumn Afternoon when the narrative builds toward the marriage of the protagonist’s daughter, only for it to be elided in its entirety.

What this particular method subtly elucidates is Ozu’s mature view of the world. Major events in a lifetime invariably affect many different people, and are as significant (more?) for the way they affect others, and the way other people react to them and make sense of them within the context of their own lives (this is also central to Kurosawa’s Ikiru [1952]). In the aforementioned films, the daughter’s marriage leaves her father alone. In Brothers and Sisters the death of the patriarch logically has immense ramifications for everyone in the family.

This may seem all too obvious. But in contrast to much mainstream cinema, where the effects of any significant action on those who directly experience it is paramount, it is through a concern with the day-to-day existence of his characters as they cope with life going on in all its banality, that Ozu’s famed transcendence, his contemplative view of everyday existence, emerges.

Finally, it is worth pointing out that Brothers and Sisters was also significant to Ozu’s career in commercial terms. The ten years that separated the two main phases of the director’s career saw both the escalation of the Sino-Japanese conflict (in September 1937 Ozu was drafted and spent almost two years on the battle front in China) and World War II. At this time films were seen (in Japan and other countries) as powerful tools for promoting nationalist, propagandistic sentiment. And so, in 1939, the new Motion Picture Law was established to intensify state control of filmmaking and ensure the right kinds of films were made.

Ozu returned from China in the same year as the Motion Picture Law was introduced, and wrote a screenplay that was deemed unworkable by its script-vetting system (because of its upper-class milieu). After attempting to modify his story, Ozu gave up and the screenplay was withdrawn. The film that Ozu and regular collaborator Tadao Ikeda then produced was Brothers and Sisters, which was something much more like the shomin-geki Ozu had been perfecting in the 1930s.

These films had generally been critically well-received and commercially disappointing. But Brothers and Sisters was released into a new cinematic climate; one in which family dramas had been promoted, and thus almost mass-produced, as repositories of family (and by extension national) harmony. And so it was that (even though it was not like other home dramas) the film was a substantial box-office hit, Ozu’s first, and generated an audience for his work that by and large remained for the rest of his career. It was after this that the by now overstressed sentiment that Ozu was a national Japanese treasure, too Japanese for foreign audiences, came into being.